Is anti-racist a code word for anti-white? No, but the people behind #WhiteGenocide may think so 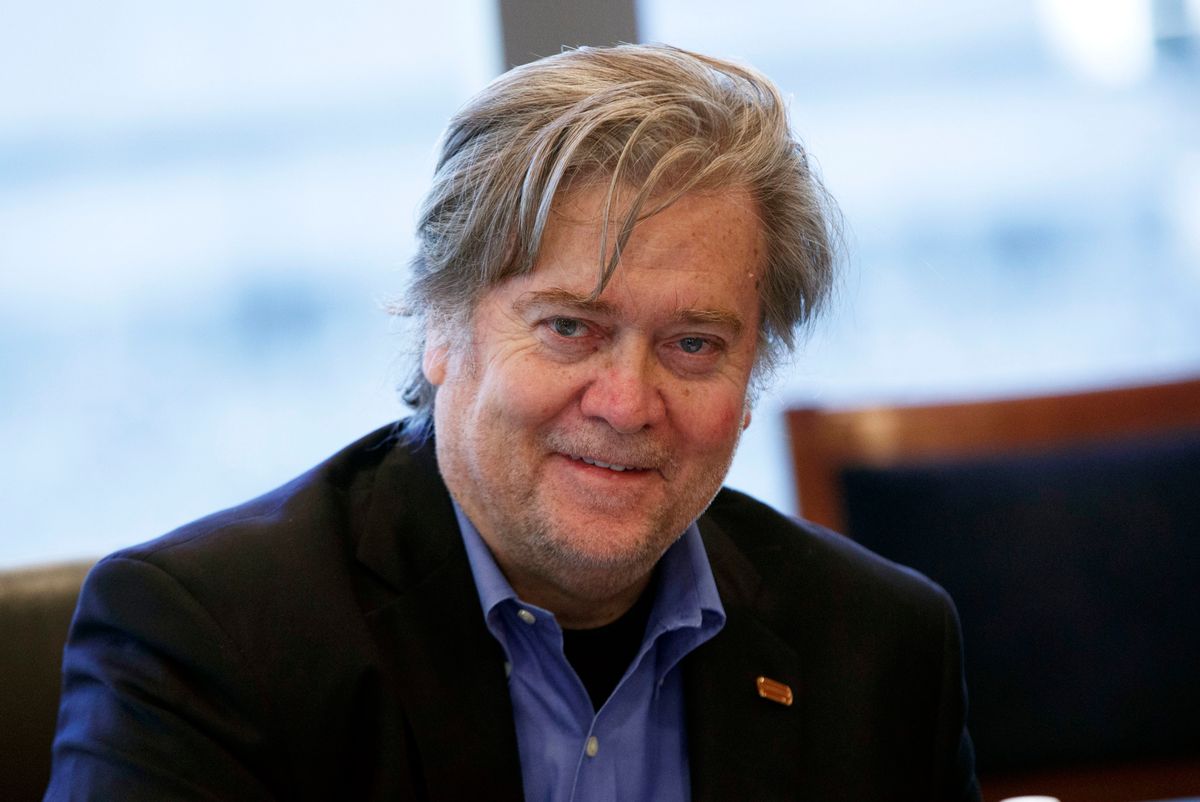 The false claim that there is a genocide against white people is a key rallying cry used by organized white supremacists to justify racist violence targeting people of color, Muslims and Jews. With the rise of Donald Trump, who promptly appointed white nationalist Steve Bannon as his chief strategist, those forces will soon have a direct line to the White House.

George Ciccariello-Maher, an associate professor of international politics and decolonization at Philadelphia-based Drexel University, recently found himself at the center of a smear campaign for mocking the concept of white genocide. On Dec. 24, Ciccariello-Maher posted a tweet stating, "all I want for Christmas is white genocide." He explained the tweet in a later statement: “For those who haven't bothered to do their research, ‘white genocide’ is an idea invented by white supremacists and used to denounce everything from interracial relationships to multicultural policies (and most recently, against a tweet by State Farm Insurance). It is a figment of the racist imagination, it should be mocked, and I'm glad to have mocked it.”

Ciccariello-Maher’s tweet and other social media commentary was soon reported by the white nationalist publication Breitbart, which ran an article by Warner Todd Huston referring to the scholar’s Twitter feed as “hateful” and “obnoxious.” The comments section of the article included at least one death threat against Ciccariello-Maher, as well as hateful messages targeting LGBTQ people and African Americans. The story quickly spread to Reddit and 4chan, and before long George Ciccariello-Maher had become the target of a coordinated campaign to contact his employer, Drexel University. Ciccariello-Maher said he awoke Christmas morning to death threats targeting him and his family.

But Drexel, instead of defending Ciccariello-Maher, appeared to be swayed by the pressure it received and publicly condemned his social media remarks as “utterly reprehensible” and “deeply disturbing.” The university’s statement did not include any mention of the white supremacist origins of the term Ciccariello-Maher was mocking — an omission that extended to numerous press outlets which covered the story.

Scholars of fascism and the racist right told AlterNet such omission is dangerous in the era of Trump, with implications far beyond Ciccariello-Maher. “This phrase and its broad dissemination these days is helping shape what Trumpism is politically and also, by its very framing, is something that can authorize any kind of violence against people of color,” Joseph Lowndes, an associate professor of political science at the University of Oregon in Eugene, told AlterNet. “We should mock it, expose it and delegitimize it.”

Term with a disgraceful history

“Fears of the decline of the so-called white race have been around for a long time, with different iterations,” Lowndes said. “In the American context, it goes back to fears of slave revolts. You can see it in Thomas Jefferson’s notes, when he describes slavery as holding a ‘wolf by the ears.’ He claimed that once you let the wolf go, it will turn on you and devour you.”

Such racist concepts were used as salvo against movements to abolish slavery. "In the 19th century, before the Civil War, you can look at how people who were anti-abolition were warning everyone about an impending genocide if slaves were liberated,” said Alexander Reid Ross, who teaches in the geography department at Portland State University and is the author of the forthcoming book "Against the Fascist Creep."

In undated remarks published in a book of his writings and speeches, the abolitionist William Lloyd Garrison expressed his outrage at such baseless fear-mongering:

"Before I proceed any further, let me call attention to a remarkable exemplification of the insincerity and effrontery of the anti-abolition party in this country, as manifested this day. What have they not done, for the last five years, to cast odium upon our principles and measures? Have they not ridiculed without mercy, our demand for the immediate abolition of slavery as wild, chimerical, monstrous? Has not the idea of 'turning loose' so many unlettered, penniless, homeless creatures, seemingly filled them with horror? Have they not a thousand times declared, that a sudden emancipation would fill the land with blood, and be the signal for a war of extermination?... Though they have been prophesying 'evil, and only evil, and that continually,' of any and every scheme of immediate emancipation; though they have advanced it as a self-evident proposition, that bloodshed and ruin must be the inevitable consequence of letting all the oppressed go free at once, it seems, after all, that they knew nothing about the matter. What was beyond all doubt with them, a short time since, is now full of uncertainty: they wait for intelligence!"

Following the Civil War, false claims about threats to the “white race” influenced the rising eugenics movement, Ross explained. This racist outlook was captured in the 1916 book, "The Passing of the Great Race," by eugenicist Madison Grant, who was a personal friend of Theodore Roosevelt’s. Adolf Hitler was a fan of Grant’s and often quoted from his work.

One can trace a direct line from the early 20th-century eugenicists to the racist movements of today. As the Southern Poverty Law Center points out, the Pioneer Fund was started in 1937 by Wickliffe Draper, a textile magnate, with the express purpose of pursuing "race betterment" by promoting the genes of people "deemed to be descended predominantly from white persons who settled in the original thirteen states prior to the adoption of the Constitution." The SPLC notes, “The Pioneer Fund has supported many of the leading Anglo-American race scientists of the last several decades as well as anti-immigration groups such as the Federation for American Immigration Reform (FAIR).”

Trump’s choice for attorney general, Jeff Sessions, "regularly" attends events hosted by FAIR, according to the SPLC, which has classified the organization as a hate group since 2007. Kansas Secretary of State Kris Kobach, a leader of Trump’s transition team, has served as counsel to FAIR's legal arm, according to SPLC. “We can see how the Trump administration is only a stone's throw from this kind of angsty rhetoric and the people who advance practical ‘solutions’ to these made-up problems,” said Ross.

According to Ross, fears of white genocide re-emerged “after World War II, with the decolonization process and war of liberation in Algeria, all the way through the liberation of Zimbabwe, then called Rhodesia, as well as during the anti-apartheid movement.”

Ross points to European intellectuals from the “European New Right” as playing a key role in “normalizing the notion of white genocide, arguing that an apartheid-style racial separation would preserve cultural integrity against 'ethnocidal' multi-culturalism and liberal democracy.”

Lowndes emphasized that in the U.S. context, fear-mongering over the supposed decline of the white race picked up steam after the civil rights and black freedom movements. “There was a return of language about what is going to happen to white people if black people get full rights.”

"They are the actual racists"

Sophie Bjork-James, a researcher at Vanderbilt University with expertise in conservative social movements, told AlterNet that the meme of “white genocide” has become an “increasingly popular frame” over the past 10 years, because “it frames whites as victims in a very emotionally resonant way. It seems like it is getting a much broader audience, which is scary because that can make it seem like it’s a legitimate term. Some mainstream media outlets will use the term without referencing its white supremacist origins.”

Bjork-James emphasized that the concept of white genocide “dangerously deflects away from what's actually happening in terms of economic stratification.” She explained, “If we look at how white people understand contemporary race relations, a huge percent think whites now experience more discrimination than people of color. It is not just white nationalists who see white people as victims of racial discrimination.”

“On the one hand, our society is completely structured by racism that privileges white people, and many white people don't see that,” she continued. “I think it’s really telling that the U.S. was founded on the genocide of Native Americans, and now white people claim they are experiencing genocide."

Last year, a group calling itself the White Genocide Project temporarily erected a billboard in Springvale, Alabama, which stated “Diversity Means Chasing Down the Last White Person” with the hashtag #WhiteGenocide on the bottom. One of the individuals behind the billboard told SPLC that the group took inspiration from the prominent segregationist Bob Whitaker. Widely influential among white supremacists, Whitaker authored an article that claimed, “anti-racist is a code word for anti-white.”

Reflecting on his experiences over the past several days, George Ciccariello-Maher noted that adherents of the mythical white genocide present the real danger. “White racists openly support the idea of a pure, white country led by white males, as Richard Spencer recently put it,” Ciccariello-Maher told AlterNet. “For them, anything is white genocide, from multiculturalism to intermarriage. They are the actual racists who uphold the ideas that have been used to carry out actual genocide.”