Sean Spicer, Donald Trump's future press secretary, says "Business as usual is over" when it comes to the new administration 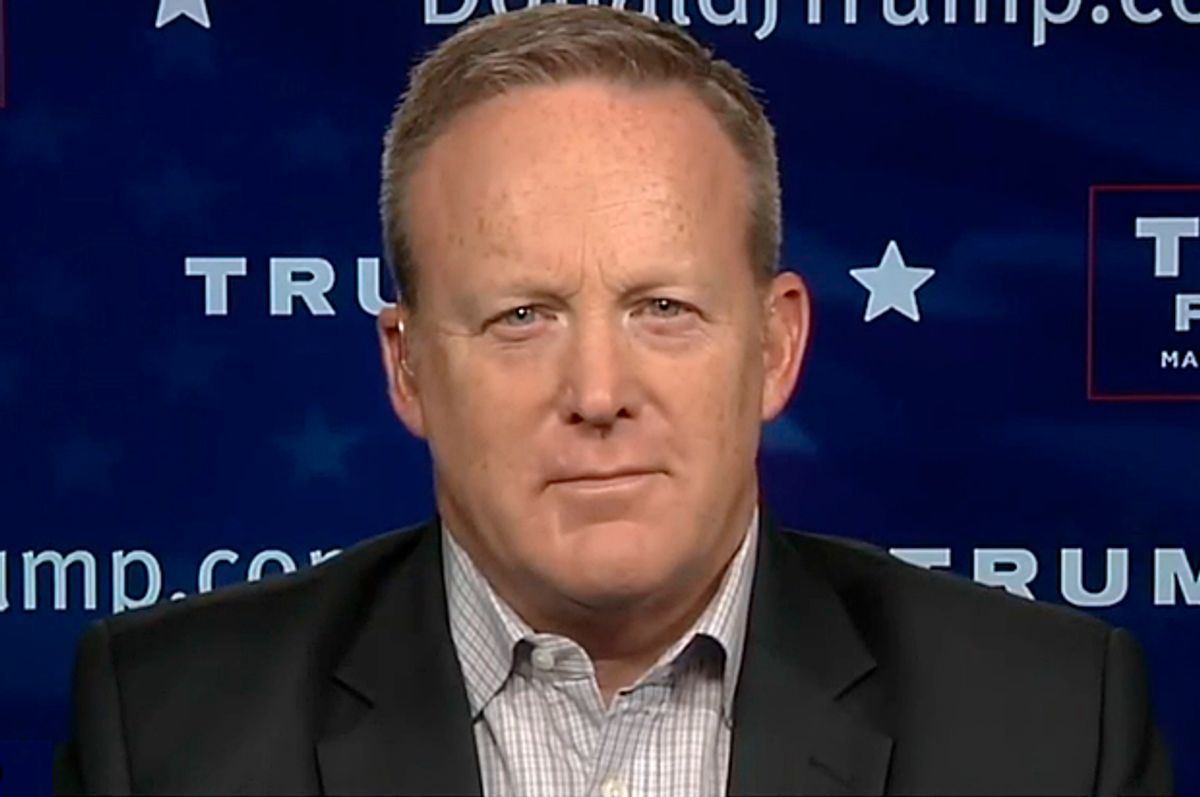 Sean Spicer, the former House Budget Committee spokesman who will serve as President-elect Donald Trump's director of communications and press secretary, spoke with conservative radio host Hugh Hewitt on Thursday morning on everything from the Supreme Court and Israel to Trump's numerous conflicts of interest.

One of the interview's early questions involved the conflicts of interest controversy, which Hewitt dismissed right off the bat by saying "I just don’t care about that story." That said, he allowed Spicer the opportunity to address the topic, and Spicer ran with Team Trump's line that he is merely rewarding success rather than lining private business interests' pockets.

"This gets back to this idea that he wants ideas, opinions, people who have been successful or who have ideas to implement that’ll bring success," Spicer said. He soon added, "You talk about a guy like Rex Tillerson, right? I don’t know what the guy makes at ExxonMobil, but it’s one of the top companies in the world. He’s making money hand over fist. And yet, he want to serve this country and make it better, so he’s willing to step away from all of that in the same way that the president-elect has stepped away from his business, or is stepping away from his business, because they care about the country, and that they recognize that they have been given opportunities through this amazing country that we live in, and they want to give back."

After Hewitt praised Trump's cabinet choices for the labor department and Environmental Protection Agency (EPA), he asked Spicer if Trump had any plans for replacing the late Justice Antonin Scalia on the Supreme Court.

"No, no," Spicer said. "He has had some discussions with staff and different outside groups and solicited some input, but to the best of my knowledge, there have been no one interviewed."

Hewitt then returned to "the conflicts question, because I hear it talked about all the time." He asked Spicer whether Trump had postponed a planned press conference because his lawyers had yet to come up with a thorough plan on managing his various conflicts.

"That’s part of it, yeah, and as the president-elect noted last night, it’s a fairly simple process," Spicer said. "But I think that because there’s a lot of lawyers involved, and there’s a lot of entities, I mean, he’s, you know, and this isn’t a guy who just sort of made money through hedge funds. He owns some of the most iconic properties in the world. It’s a pretty simple process, but there’s other family members involved, and so, and I think they wanted to make sure that all the I’s are dotted and all the T’s are laid out."

Hewitt also asked whether Trump could be expected to "keep up a regular and as energetic a series of press conferences as previous presidents." Spicer hinted that Trump would likely stick to conservative media outlets that would give him friendly coverage.

"I think the thing that you’ve seen with Donald Trump is that he doesn’t, he doesn’t look to the past and say I’ve got to conform to these precedents," Spicer said. "He figures out what’s the best way. And so maybe we do, you know, a series of press conferences, but maybe we do some town hall, you know, Facebook town halls. Maybe we go out and solicit input from Twitter. I don’t, I mean, the answer is we’re looking at a lot of things."

Spicer also didn't miss an opportunity to say how great theTrump administration is going to be for Israel.

"I don’t want to get ahead of anything at this point, but I will tell you that the relationship with Israel both in terms of what the president-elect has said, and what you saw Prime Minister Netanyahu say yesterday in terms of very looking forward to working with this next administration, really should highlight to anybody who is concerned about Israel or who loves Israel, that this administration is going to put Israel in its rightful place as a true, true friend of the United States, and a beacon of democracy in the Middle East," Spicer said.