Hope for 2017: Six policy ideas that can lay the groundwork for a more progressive America

If Democrats can capture power in state legislatures, these realistic policies can build toward long-term victory 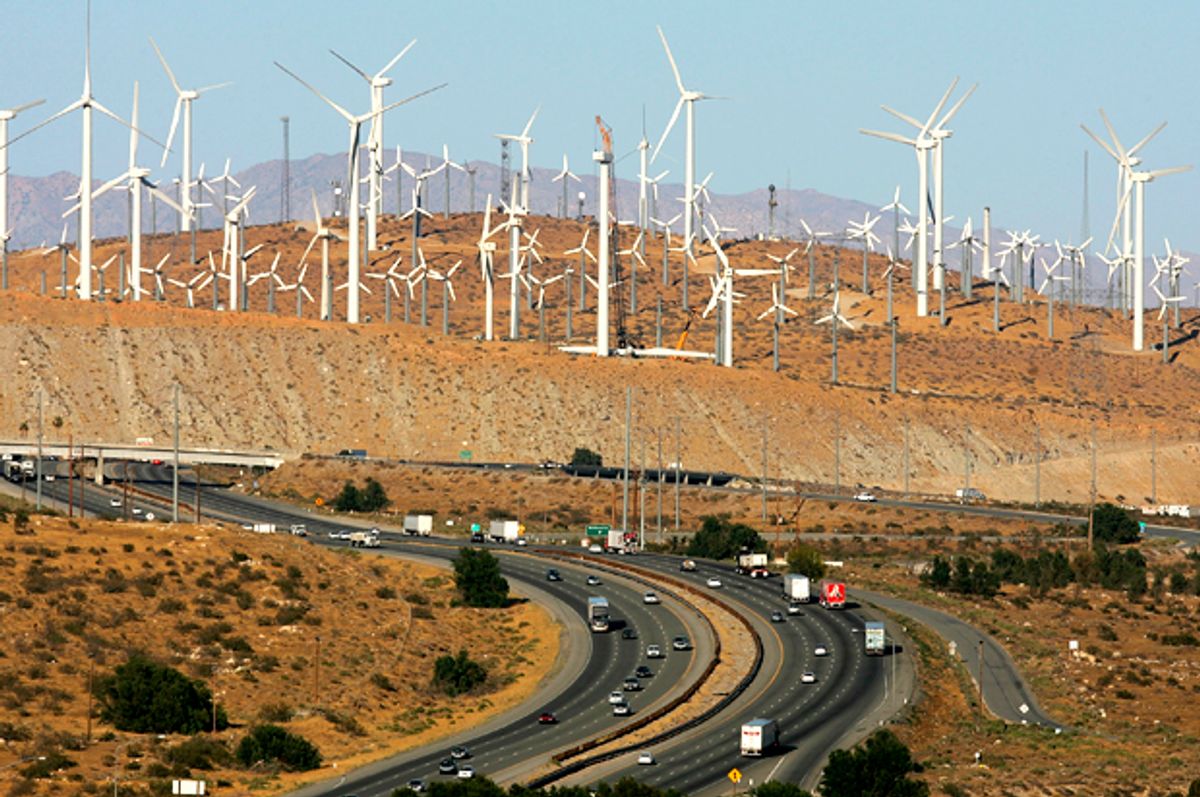 Had FBI director James Comey not made the decision to send a letter to the House Judiciary Committee, and if House Republicans had not taken the letter out of context and if the media had not plastered the story across their front pages, it's likely that Donald Trump would not be three weeks away from inauguration as our next president. But they did. The lesson is that presidential elections are volatile affairs and one party will always struggle to hold the White House for an extended period of time. It’s true that Hillary Clinton’s campaign made errors -- but so did Trump’s.

The bigger error for Democrats has been a structural one, not a single campaign: They have lost immense amounts of political power at every level below the presidency (indeed, in many cases they are not even contesting winnable elections). Just weeks after Obama swept into power in 2008, Republicans won a Senate race in blue Massachusetts. Weeks after Trump won, while losing the popular vote by 2.8 million, Democrats barely contested a key Senate election in Louisiana. There is now a Republican governor in Vermont (a state with a socialist senator) but Democrats have only won one governorship in the deep South and it required Republican Governor Bobby Jindal devastating the state of Louisiana, and then running a flawed candidate mostly known for an embarrassing prostitution scandal.

This failure has important implications for policy. When anger at Obama and Democrats combined with structurally low turnout and the Tea Party movement, Republicans seized nearly a thousand Democratic state legislature seats. At that level, most people are just voting the party line, so it wasn't a question of the Republicans running superior candidates.The result was an opportunity for conservatives to push through hundreds of bills written in advance by corporate lobbying groups like the American Legislative Exchange Council (ALEC) and the increasingly extreme anti-abortion movement. In the era of Trump, such a strategy could easily suit the progressive left, which could use control of state legislatures to push policy in new directions.

Democrats must begin winning state legislatures -- but if they can do that, what should they do with their power? Dozens of issues immediately come to mind, from reproductive justices and a higher minimum wage to abolishing the death penalty. The list below is not meant to be comprehensive, but I picked policy proposals with several goals in mind. First, these policies are aimed at creating reinforcing feedback loops that will further empower progressive policymaking. Second, they are intended to be relatively popular and simple to pass and then implement. Finally, they are aimed at multiple parts of the progressive base and designed to mobilize beneficiaries to protect the benefits they enjoy. The list is not comprehensive, and certainly doesn’t cover the full extent of progressive possibility, but they represent a worthy starting point.

The first set of policies that Democrats should implement are those aimed at strengthening the ability for progressives to mobilize and enact their policies. Republicans prioritize policies that will allow them to maintain power, while Democrats favor pragmatic governance. This inequity has reinforced Republican victories. The policies below will help Democrats create the same feedback loops.

1. Automatic Voter Registration More voting access would lead to a more progressive electorate. The first thing Democrats should do when they have a chance is to implement automatic voter registration and same-day registration, as well as expanding early voting and increasing the number of polling places. This will make it easier for progressive organizations to mobilize voters, rather than having to invest in costly and time-consuming registration drives. These new potential voters will lean left of center and would be a key progressive constituency. Political scientist Anthony Fowler finds that “on-cycle gubernatorial elections, on average, increase turnout by 17.4 percentage points and the Democratic candidate’s vote share by 6.4 percentage points.” Democrats need to stop worrying that access to the ballot isn’t sexy or respectable. It is a vital goal.

2. Public Financing of Elections After easing access to cast a ballot, Democrats should ease the process of getting on it. A key barrier is money in politics, which can be solved with a public financing system. As my work at the municipal and federal level has shown, donors tend to be white, male, rich and conservative. The result is a key fundraising barrier, particularly for candidates of color and working-class candidates. It also means politicians spend more time listening to the concerns of the wealthy, not regular Americans. Proposals to reduce the age to run and ease ballot access would also help progressives run competitive candidates. Dan Cantor, the national director of the Working Families Party, told Salon, “Public financing is tremendously important. That allows candidates who want to do good stuff to not have to worry that they won’t be able to run for re-election because the people with money will abandon them.”

3. Ease Union Organizing Democrats need to empower working class organizing. The first step is repealing "right to work" laws. One study finds that whether a state had a right-to-work law was more important than partisan control of the state government in predicting the progressiveness or regressiveness of the state’s taxes. Democrats have talked a big game about unions and inequality, but have done little to enable unions to organize more easily. Simple policies like making it more difficult to label workers as contractors could make union organizing easier.

These reforms will compound each other. With automatic voter registration, unions and activists can focus less on registering new voters and more on mobilizing already registered voters. Public financing will help progressive candidates run for office and win, creating a positive reinforcing cycle. Gov. Dannel Malloy of Connecticut, who early in his tenure passed an expansive voting rights bills, hiked the minimum wage and guaranteed paid sick leave, told Salon, “I think public financing helped in all of those things. Public financing gave me enough money to win a race by 6,400 votes when I was being outspent 2 to 1.”

There are dozens of policies that Democrats can implement to help their constituencies. Cracking down on predatory lending, fully funding valuable government agencies, living wage ordinances, efficient public transportation and expanded public housing are all valuable pursuits. This is simply a selection of policies that could be easily passed, and would create benefits that key progressive constituencies would mobilize to defend.

4. Direct Cash Transfers One of the most unnecessary and foolish policies of the Clinton administration was giving welfare money to states in the form of block grants. Increasingly, such money isn’t spent on direct cash transfers but instead is spent on abstinence education, marriage counseling and tax breaks for rich kids. When Democrats take power they should shift as much money to direct cash transfers and eliminate the complicated bureaucracy that are often designed to make it harder for black, brown and poor people to get public assistance.

5. Green Energy Investment The United States should have started switching to a post-carbon economy decades ago. We did not. Democrats should speed that transition with immediate investment in green energy and green jobs. Because the burdens of climate change will predominantly fall on low-income communities and communities of color, these communities should get targeted investment. California first implemented this model in 2012, with a law requiring that “25 percent of carbon revenue from the state’s cap-and-trade program must be spent on clean-energy investments that benefit environmentally vulnerable low-income communities.” A New York bill that has passed the state Assembly aims to generate half of all electricity from renewable sources and mandates that 40 percent of any funds generated by efforts to reach this mandate must be invested in low-income communities.

6. Reproductive Justice The Republican dominance of state legislatures has lead to a recent wave of anti-abortion legislation across the country, culminating recently in a the “heartbeat” bill vetoed by Gov. John Kasich in Ohio. Such laws aren’t particularly popular: In the 2012 Cooperative Congressional Election Studies survey, only 12 percent of Americans believe abortion should never be permitted. In contrast, nearly half (49 percent) believe women should “always” be able to obtain an abortion. Democrats should repeal laws that limit access to abortion and increase funding for reproductive access. Reproductive freedom is essential to economic freedom.

Bonus Idea: Medicaid Expansion In states that have not expanded Medicaid, Democrats should have a bill to do so on the governor’s desk the day she or he enters office. Medicaid expansion increases the insured rate, betters the lives of low-income people, increases voter turnout, creates jobs and stimulates economic growth.

It’s clear that these proposals are not the end of a progressive agenda. But they are an achievable agenda that works across most states, are quite popular and will create space for long-term progressive power-building. Most important, these proposals avoid the sort of half-assed technocratic solutions Democratic wonks love so much. Stop with the tax credits and the means-testing and the thresholds. Use government to deliver clear and direct services that people can see, and will mobilize to protect. Stop being afraid to pass policies that will help shore up the long-term power of the Democratic Party. And stop endlessly debating which Democratic constituency to throw under the bus in the vague hope of Republican cooperation. When Democrats win, they need to implement a full-throated agenda. After all, that’s what Republicans do, even when they lose.