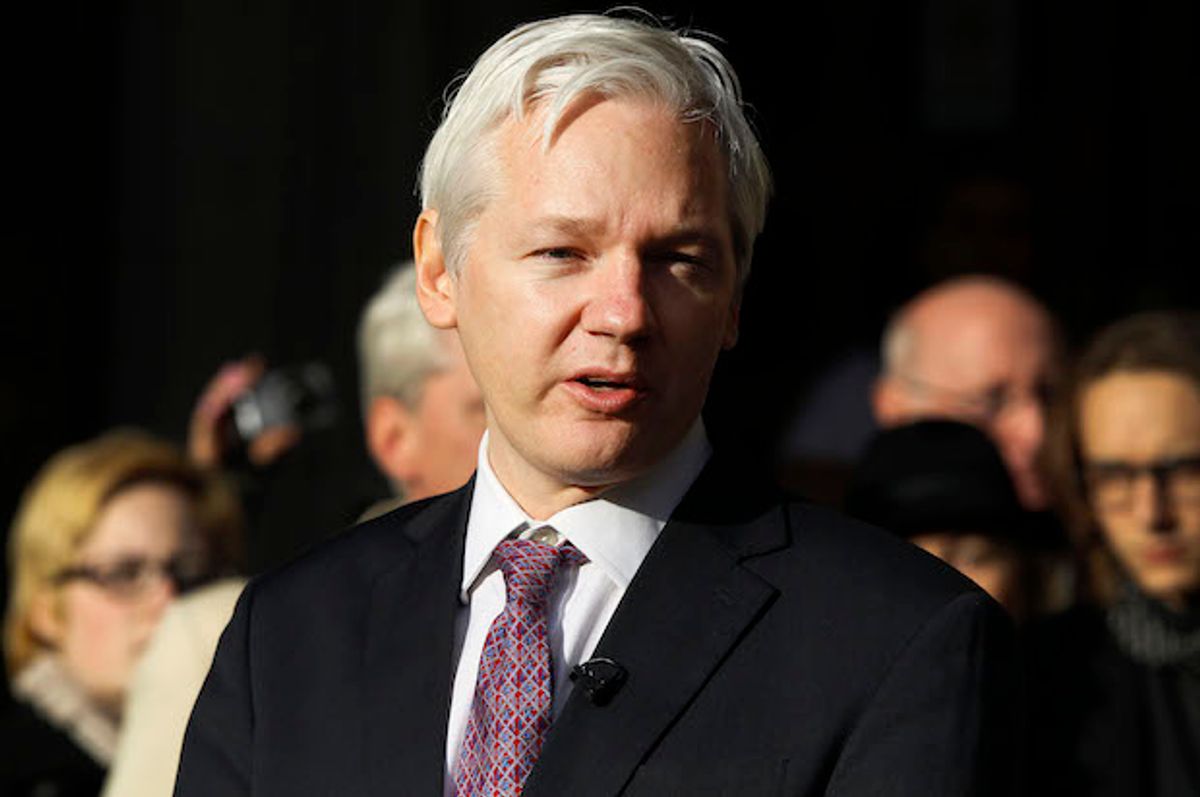 Julian Assange, the WikiLeaks founder who has been accused of targeting Hillary Clinton in order to help Donald Trump due to his connections with the regime of Russian dictator Vladimir Putin, has conducted an interview with Fox News' Sean Hannity that will only further reinforce those suspicions.

When Hannity asked Assange if he could "tell the American people 1000%" that WikiLeaks did not get the hacked Democratic National Committee emails from Russia, he offered a hedged reply.

"Yes. We can say, we have said, repeatedly that over the last two months that our source is not the Russian government and it is not a state party," Assange said. While this reply rules out institutions, it does not acknowledge the possibility that the material was received by an agent working for or with Russian state institutions.

Assange also echoed the line being repeated by both Putin and President-elect Donald Trump — namely, that President Obama and the intelligence community are agreeing that Russia was involved in a conspiracy to hurt the incoming president.

"They're trying to delegitimize the Trump administration as it goes into the White House," Assange said. "They are trying to say that President-elect Trump is not a legitimate president."

This isn't the first recent interview in which Assange has raised eyebrows with his defense of and/or praise for Trump and Putin. In December Assange told the Italian newspaper La Repubblica that Trump's election opened up opportunities for "change for the worse and change for the better" because he is "not a D.C. insider" and praised Russia for its "many vibrant publications, online blogs, and Kremlin critics."

"So my interpretation is that in Russia there are competitors to WikiLeaks, and no WikiLeaks staff speak Russian, so for a strong culture which has its own language, you have to be seen as a local player," Assange said.

In April, when the Panama Papers exposed that widespread corruption among Russia's political and business elites, Assange went to Twitter to denounce them — even though, as the operator of a website devoted to leaking sensitive information from corrupt governments, that opposition was highly hypocritical (a term this reporter is happy to defend as an objective statement).

"#PanamaPapers Putin attack was produced by OCCRP which targets Russia & former USSR and was funded by USAID and [George] Soros," read one tweet.

"US govt funded #PanamaPapers attack story on Putin via USAID. Some good journalists but no model for integrity," read another tweet.

Incidentally, WikiLeaks could provide no proof that the U.S. government had been in any way involved in the Panama Papers being leaked. Also interestingly, Putin began using the same argument as Assange to delegitimize the Panama Papers shortly after the WikiLeaks tweets.

Assange's other connections to the Russian government include a half-hour political TV show called "The Julian Assange Show" that he aired on Russia Today, Russia's state-owned and pro-Putin television network; by his own admission encouraging NSA whistleblower Edward Snowden to seek asylum in Russia instead of Latin America; and suggesting the use of Russians for his Security Service during his political asylum at the Ecuadorian Embassy in London, where he has resided since 2012.

"I understood his position: he’s in a state of war with the American government," said Pussy Riot member Nadya Tolokno, telling The Daily Beast about two-year-old conversation she had with Assange. "He’s smart and charismatic and will use any means to destroy the American government. And we had a conversation if it was really the ethical thing to do that with the hands of another government [Russia] which is, in fact, much worse and a real authoritarian government. Julian Assange is a really good diplomat, so he can basically just dodge direct answers from my questions on that, and gives other answers — as Putin usually does when people ask him directly about some uncomfortable things."