Claiming our right not to kill: Resolutions should be about fighting racism, greed and militarism

As extraordinary numbers of people are murdered in Chicago, the root causes are universal 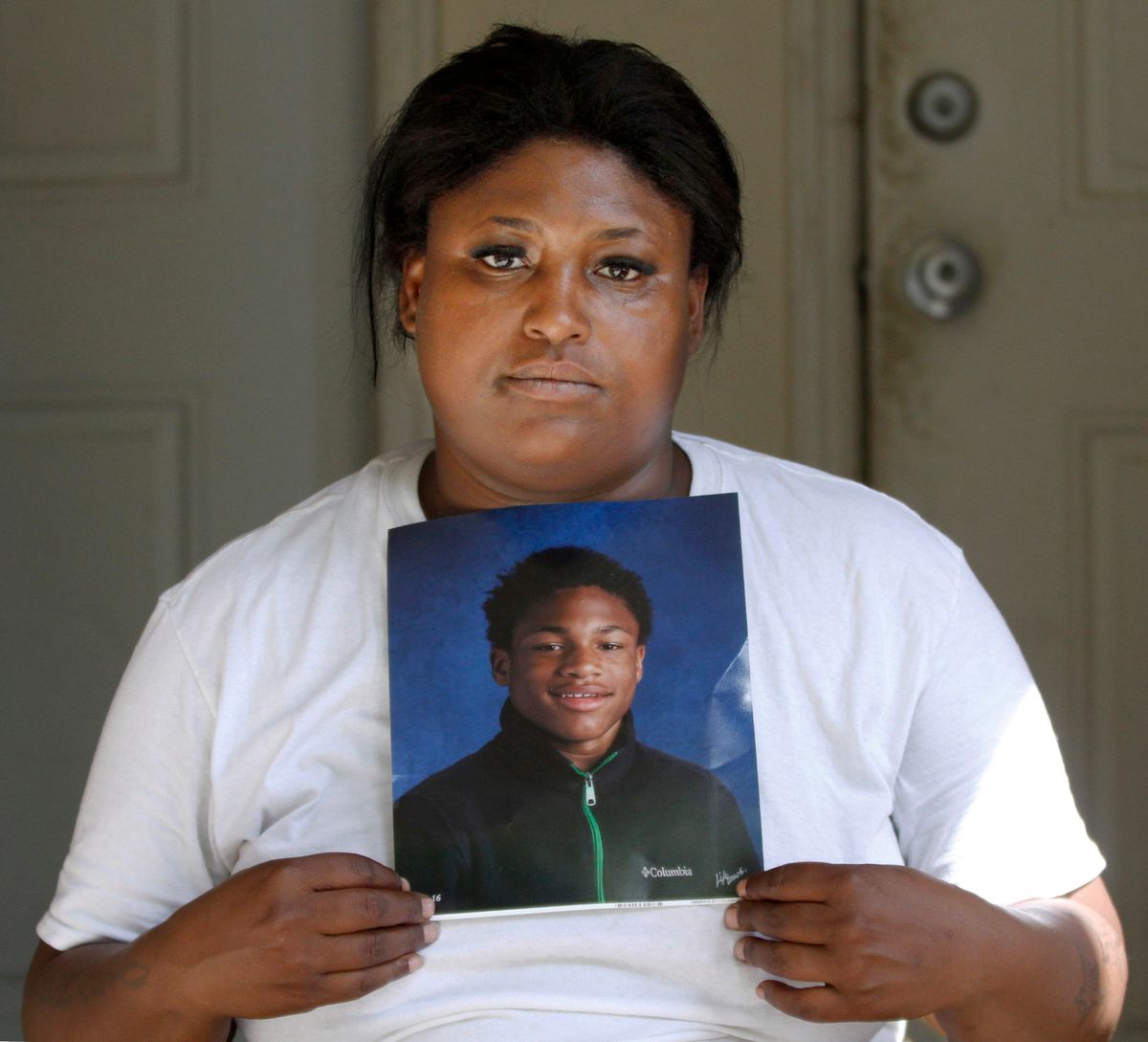 In this Sept. 7, 2016 photo, Monique Causey holds a portrait of her 14-year-old Malik, who was shot on Aug. 21, 2016, at her home in Chicago. August was the deadliest month for Chicago homicides in two decades, and an analysis of the toll shows more clearly than ever that the blame lies with surging violence in a handful of the city’s most impoverished neighborhoods riven by loosely organized street gangs. (AP Photo/Tae-Gyun Kim) (AP)
--

This New Year’s Eve, 750 heavy wooden crosses were distributed to a gathering of Chicagoans commemorating the victims of gun violence killed in 2016. Rev. Michael Pfleger and the Faith Community of St. Sabina Parish had issued a call to carry crosses constructed by Greg Zanis. The crosses, uniform in size, presented the name, age and in many cases a photo of the person killed. Some who carried the crosses were relatives of the victims. As the group assembled, several sobbed upon finding the crosses bearing the names and photos of their loved ones.

Those carrying the heavy crosses along Chicago’s Magnificent Mile of high-end shops and restaurants knew that other arms than theirs were aching with longing for loved ones who would never return. In 2016, more people were killed in Chicago by gun violence than in New York City and Los Angeles combined. The number killed represented a 58-percent increase over 2015. “How could this happen?” was the question asked on the front page of the Chicago Tribune.

It was a year of social service program shutdowns driven by the governor’s office in Springfield. The Rev. Dr. Martin Luther King’s description of a triplet of giant evils — racism, extreme materialism and militarism, each insoluble in isolation from the others — helps us identify an answer to the Tribune’s question.

Training for and diverting money to wars overseas was a crisis inextricable from the race crisis at home, as were policies promoting radical wealth inequality. Representative Danny Davis of Chicago, whose grandson was killed by gun violence in 2016, insisted that “poverty was fueling the city’s bloodshed," and that Chicago needed to make investments ‘to revamp whole communities.’”

Poverty and racism clearly interact: Blacks and Latinos comprise 56 percent of the incarcerated population, yet only 30 percent of the U.S. population. A report documenting the rates of incarceration for whites, African Americans and Hispanics in the Illinois state prison system notes that over half of this prison population is black. For every 100,000 people in the state, 1,533 black people are imprisoned as compared to 174 white people and 282 Hispanic people. The consequences of incarceration affect entire communities: Former prisoners are restricted in terms of employment, their families are disrupted, housing becomes unstable, they become disenfranchised, and stigmas persist.

We must also consider gun violence in relation to U.S. militarism. Gun violence in Chicago is condemned, as it should be, and yet a message to every one of the 9,000 Chicago Public School children participating in U.S. military junior ROTC programs is that killing is acceptable if you are following orders. Killing of civilians by the U.S. military is considered regrettable but acceptable “collateral damage.” These killings eliminate “high value targets.” The mere suspicion of harboring a targeted person in a home, restaurant or mosque overseas becomes an excuse for a drone attack to execute whole families or communities — an airborne version of a drive-by shooting.

President Obama had tears in his eyes in January 2016, calling for relief from record-breaking shootings and killings in the United States. Yet 2016 became a record-breaking year for U.S. export of weapons to other countries. The United States is responsible for nearly 33 percent of worldwide weapon exports, by far the top arms exporter on the planet.

“Arms deals are a way of life in Washington,” wrote William Hartung. “From the president on down, significant parts of the government are intent on ensuring that American arms will flood the global market and companies like Lockheed and Boeing will live the good life. …American officials regularly act as salespeople for the arms firms. And the Pentagon is their enabler … In its first six years, team Obama entered into agreements to sell more weaponry than any administration since World War II.”

Carrying a cross along Michigan Avenue yesterday, I thought of the terrible slaughter in World War I that killed 38 million people. Elites, weapon makers and war profiteers drove millions of men into the trenches to fight and die in the war that was to end all wars. In 1914, mired in mud, war-weary and miserable, troops on both sides took matters into their own hands. For a brief, yet magnificent time, they enabled the “Christmas truce." One account relates how some German troops began singing a carol, while British and other troops then sang a carol from their side. As voices wafted across the no-man’s land, troops began calling out to one another.

“Time and again during the course of that day, the Eve of Christmas, there were wafted towards us from the trenches opposite the sounds of singing and merry-making, and occasionally the guttural tones of a German were to be heard shouting out lustily, 'A happy Christmas to you Englishmen!' Only too glad to show that the sentiments were reciprocated, back would go the response from a thick-set Clydesider, 'Same to you, Fritz, but dinna o'er eat yourself wi' they sausages!'”

“The high command on both sides took a dim view of the activities and orders were issued to stop the fraternizing with varying results. In some areas, the truce ended Christmas Day in others the following day and in others it extended into January.”

Dr. King said, “Our only hope today lies in our ability to recapture the revolutionary spirit, and go out into a sometimes hostile world declaring eternal hostility to poverty, racism and militarism.” The soldiers in those trenches went out into their no-man’s land and showed the world one way to end wars. They should never have had to. It was left to them to venture into the no-man’s land, risking exposure to the others’ fire and their generals’ punishment for disobeying orders.

No matter what gang is issuing the orders to kill, whether a massive military power or a smaller group that has acquired weapons, we can all claim our right not to develop, store, sell or use weapons. We can claim our right not to kill or live with the memory of having killed. Declaring eternal hostility to the fear, greed and hate which are our real enemies seems to be our true hope. We can lay aside forever the futility of killing. We can be hopeful and determined that our resources and ingenuity are directed toward meeting human needs.