Donald Trump's campaign manager can spin herself out of almost anything, but Cuomo pinned her on Russian hacking 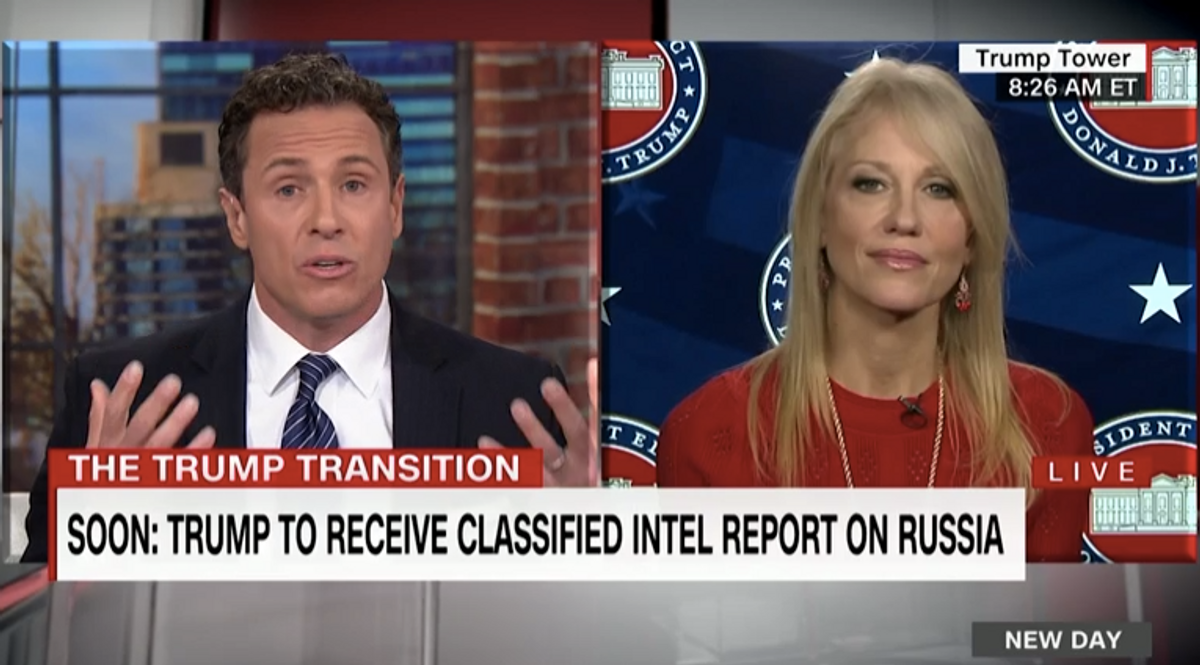 CNN's Chris Cuomo has been one of the most reliable interviewers of Donald Trump's advisers, blessing "New Day" viewers with tough cross-examinations on the Trump team's state of mind. On Friday morning, Kellyanne Conway — set to be counselor to the president once the new administration takes over the Oval Office — made an appearance on the show, leading to an almost 20-minute interview that left the spin doctor dizzy.

Accustomed to hostile interviews, Conway immediately played the victim, accusing Cuomo of interjecting his opinion in questions about Russia's involvement in cyberattacks against Democrats. "You are not asking me a question, you are making statements . . . You are giving your opinion."

Cuomo said that Trump and his allies were having problems separating the investigation into the hackings and the subsequent politicization of its findings. Conway complained that Democrats and the media were "conflating alleged Russia hacking with the actual outcome of the election."

In response, the CNN host offered to stipulate that Hillary Clinton's campaign was trying to delegitimize Trump by politicizing the hacks, but only if she conceded that the president-elect should be taking cybersecurity, especially when it involves Russia, more seriously.

"The idea of Clinton's people saying that the legitimacy of the election is tied to the revelation that Russia is behind the hacking is political," Cuomo said. "That's not something the president-elect should be putting first in his priorities."

If Conway wasn't complaining about the negative optics, she was rambling about U.S. failures in cyberespionage. Cuomo continued to press Conway about Trump's lack of interest in determining who, or what country, was responsible for the hacks.

Cuomo suggested the motives behind the Russian hacking was "irrelevant" and that the focus should be on substantiating Russia's involvement. "That is where you guys are stuck," he said. "You can't divorce these two notions. And it is creating a really tough situation for you."

Conway chided Cuomo, saying "I see you are very passionate about this."

Cuomo, astonished by this response, incredulously said: "Sure I am. Russia trying to hack during our election being ignored by the president-elect? That's troubling."