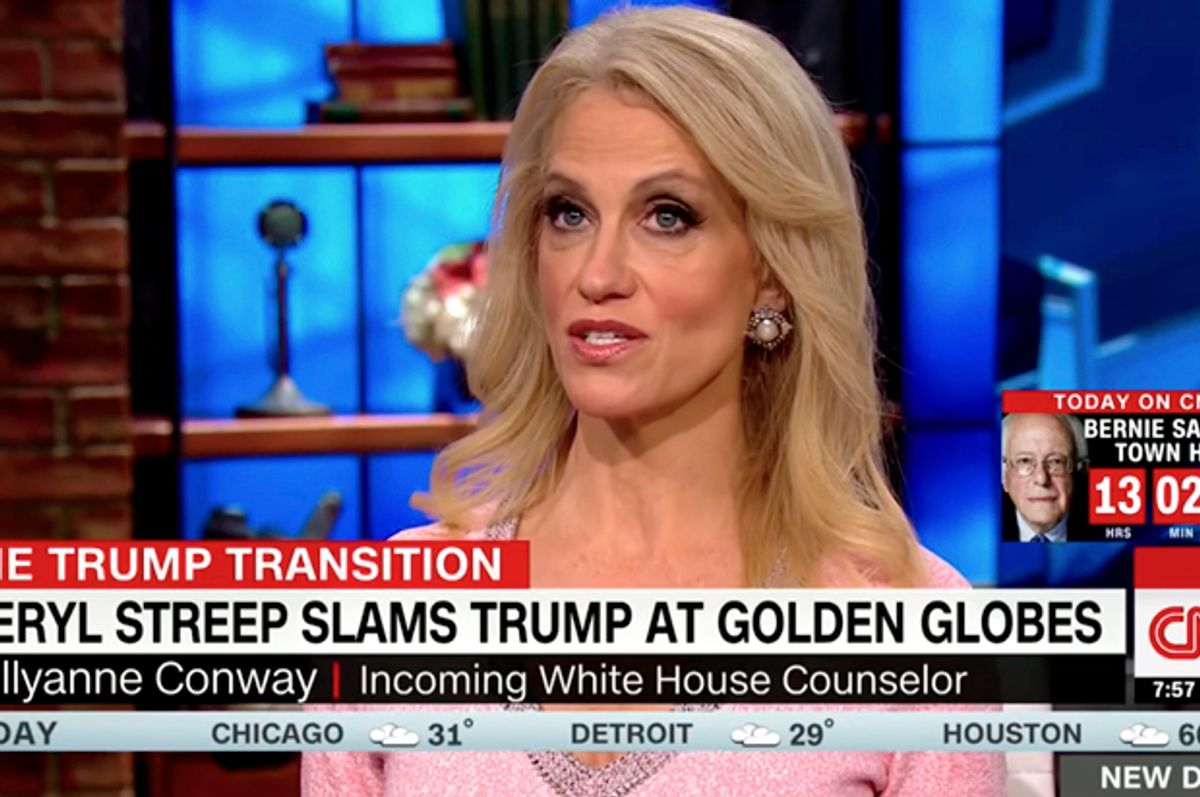 Incoming White House counsel Kellyanne Conway has a tactic for talking about Meryl Streep's takedown of Donald Trump for mocking a disabled reporter — deflect instead to the black teens from Chicago who were arrested for a gruesome video they livestreamed!

"I'm glad Meryl Streep has such a passion for the disabled because I didn't hear her weigh in or I didn't even hear her use her platform last night, Ainsley, to give the shoutout to the mentally challenged boy who last week was tortured live on Facebook for half an hour, by four young African-American adults who were screaming racial and anti-Trump expletives and forcing him to put his head in toilet water," Conway told "Fox & Friends" on Monday morning.

.@KellyannePolls: I didn't hear #MerylStreep use her platform to give a shoutout to the mentally challenged boy who was tortured live on FB. pic.twitter.com/hswzMWOPuF

Conway was referring to an incident last week in which a mentally disabled white man was tortured on Facebook Live by four black teens. That event had nothing to do with either President-elect Trump or his political opponents.

Conway also accused Streep of "inciting people's worst instincts" with her speech, claiming that Hollywood's elite should have instead encouraged the nation to come together like Conway insists Trump "has actually done from moment one."

When, Conway was on  CNN Monday morning, she tried the same thing, but more awkwardly. After talking about Republicans distracting from the Russia hack of the DNC servers, Conway wanted to make sure she hit her talking point:

CONWAY: Let's talk about Meryl Streep, by the way. I think it's great that she wants to give a platform about the —

CUOMO: That's a distraction, too, but I'll give it to you because I wanted to talk about it.

CONWAY: But seriously speaking, why didn't she use that platform to talk about the mentally challenged boy last week who was tortured on a live streaming Facebook by four young African-American adults in Chicago, screaming racial —

CUOMO: Because one of them was done by a bunch of miscreants. The other one was done by the president-elect of the United States.

CUOMO: No, I don't equate them at all. One of them was a crime.

CONWAY: — a report — and that's right. That's a crime and I hope the book is thrown at them. But again, if she's got this great platform and she has a worldwide audience at that moment, why not bring attention to that recent event?

During her acceptance speech, Streep criticized Trump for ridiculing a disabled reporter during his presidential campaign. "This instinct to humiliate, when it’s modeled by someone in the public platform, by someone powerful, it filters down into everybody’s life, because it kind of gives permission for other people to do the same thing," Streep warned.