This will not end well: President-elect Trump's first press conference was a total disaster

On Russia, the intelligence community and his business, Donald Trump's relentless self-interest will be crippling 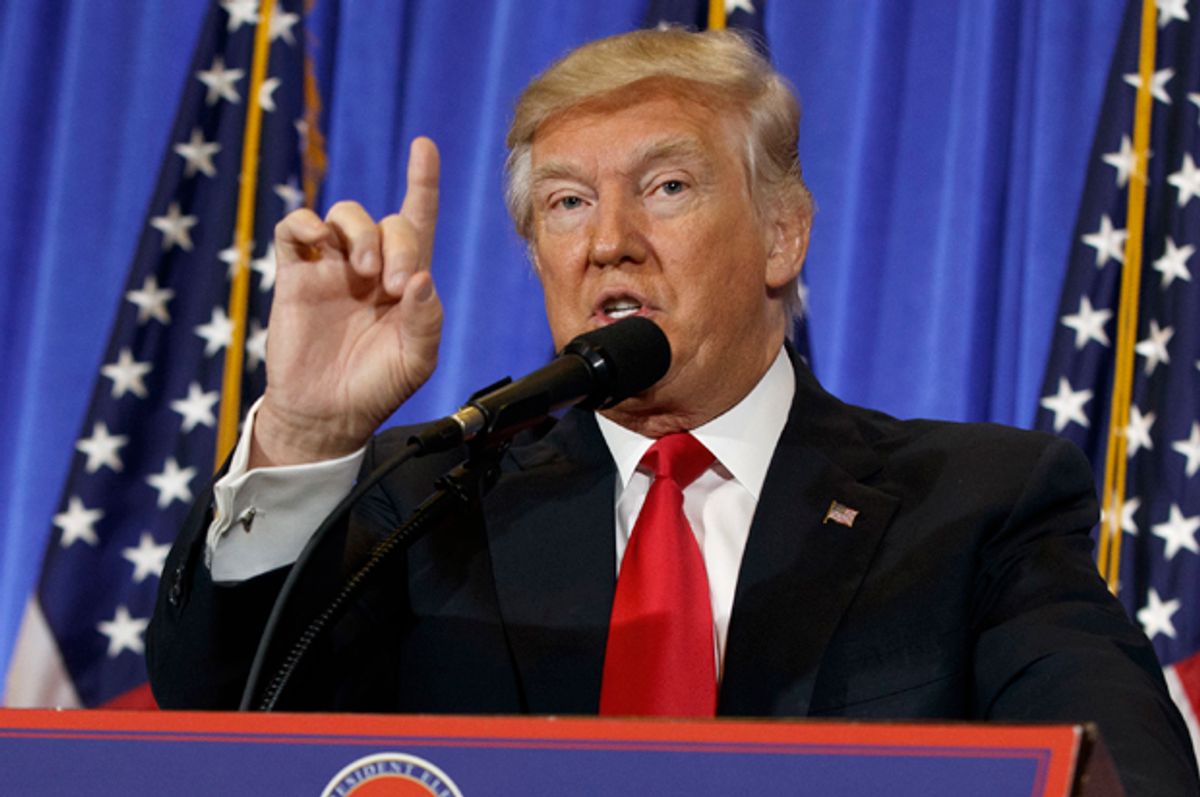 Donald Trump gave his first press conference as president-elect today, and it was, predictably, a disaster from start to finish. The man who will be president in just a few days finally acknowledged that Russia probably hacked the Democratic National Committee and disseminated stolen documents during the 2016 election.

He also implored that we give consideration to “what was learned from the hacking.” Thus you had the president-elect making excuses for an apparent act of foreign political espionage because it benefited him electorally.

Responding to media reports that he had been briefed on reports that Russia had compromising information that could be used to blackmail him, Trump declared war on BuzzFeed and CNN, calling the former a “failing pile of garbage” and dismissing the latter as “fake news” as he brushed off a CNN reporter’s attempt to ask a question. And after urging everyone to keep an open mind about Russia's leaking embarrassing information about his political opponents, Trump then attacked his own intelligence community as being no better than the Third Reich over leaks that reflected poorly on him.

So that’s all insane, but it was just a sideshow to the press conference’s true purpose: Trump and his team announcing how they plan to handle his business interests for the duration of his presidency. This is a critical issue and one that cuts directly to Trump’s ability to serve capably as president. The plan they came up seems designed to give an impression of ethical conduct while doing next to nothing to avoid the massive conflicts of interest at play.

Trump’s lawyer, Sherri Dillon, gave a long and exhaustive explanation of how incredibly difficult (or functionally impossible) it is for Trump to disengage from his many sprawling financial entanglements, which unintentionally drove home the point that it is impossible for Trump to serve as president without having any conflicts of interest. The solution she announced to this intractable problem is woefully inadequate. Per Dillon, Trump’s investments and assets will be placed in a trust, control of the Trump Organization will fall to Trump’s sons and an “ethics adviser” will join the management team to review all deals before they are approved.

So the president will still have his financial interest in the company, the people running it will be his blood relatives, and the person charged with conducting internal ethics reviews will be an employee of the Trump Organization. This doesn’t eliminate conflicts. It merely masks some of them, while creating a few new ones left unresolved.

Trump will still know what his business is up to, of course. He can read about it in the newspaper, as his attorney noted during the press conference, or he can just talk to his kids about it. (Trump promised that “they are not going to discuss [the business] with me,” but there’s no reason to believe that and no way to enforce or monitor it.) And Trump will still have an interest in maintaining his company’s health. Trump himself said at the end of the press conference that he plans to return to the company after his presidency and expects to find it in good order. The whole thing is a sham, with workarounds built in to every supposed ethical safeguard announced by Trump’s team.

Nonetheless, Trump and his team tried to give the impression that they were taking the strongest possible measures to separate the incoming president’s government duties from his personal financial interests. In doing so, however, they announced specifically how they plan to blend the two.

There’s been a lot of controversy surrounding the issue of foreign governments and dignitaries who appear to be patronizing Trump-owned properties as a way to curry favor with Trump himself. Dillon, the president-elect’s lawyer, said this issue will be sidestepped by way of a special arrangement in which Trump has agreed to “voluntarily donate all profits from foreign government payments made to his hotels to the United States Treasury.”

So there you have it. Foreigners can now, with one payment, give money to Trump’s business and the government he runs. Somehow, this is supposed to head off questions of influence peddling.

When you look at all these things put together — Trump’s excuse making for Russian hacking, his vitriolic attacks on the press and the intelligence community and the sham ethics arrangement for his businesses — you get a clear picture of the threat Trump poses as president. He is motivated wholly by self-interest. He has no discernible moral compass and no coherent governing vision and he doesn’t seem to understand or care about how the government actually works. All he cares about is self-enrichment, particularly at the expense of his enemies. It’s hard to see how investing someone like that with the powers of the presidency will end well for anyone.