Can a president be above the law? According to Jeffrey Lord, yes he can 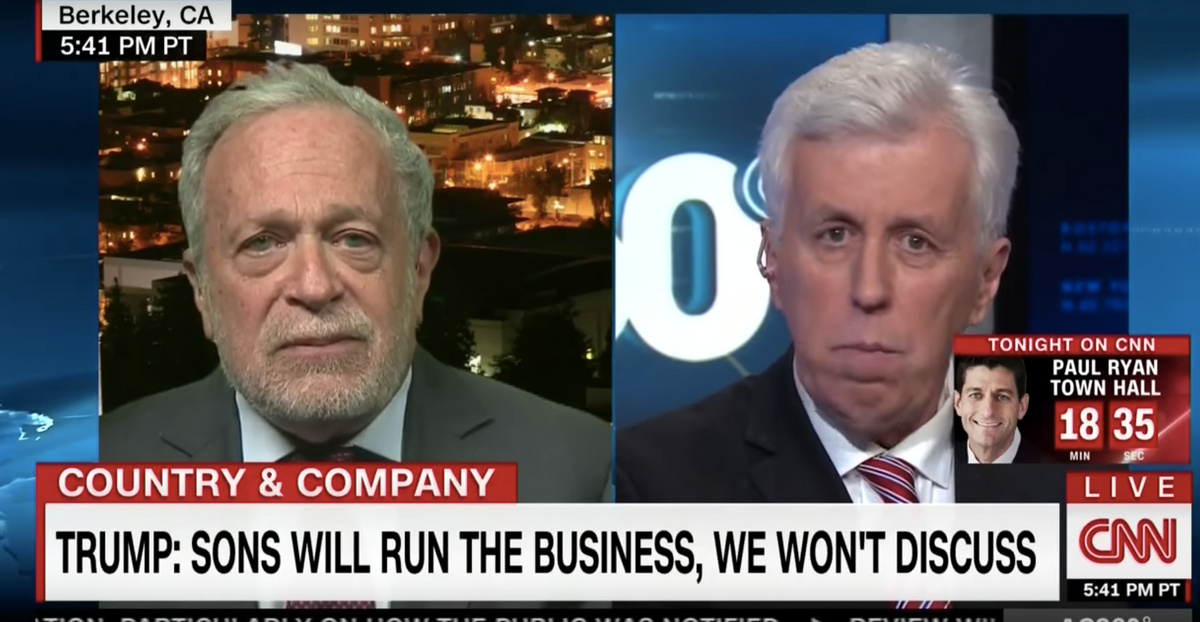 Former labor secretary Robert Reich was rendered speechless when Jeffrey Lord, a Trump surrogate, argued that President-elect Donald Trump should be allowed to get away with any unethical conflicts of interest because he won the presidential election.

"This is total disdain for the democratic institutions of government and total disdain for public trust," Reich said on CNN's AC360 on Thursday about Trump's plan to give his sons greater control over his business empire. "The idea that he’s not going to talk to his sons is clearly and patently absurd."

Lord replied by arguing that, because Trump won the election, there was no point in discussing these concerns.

"This has been litigated," Lord said. "All these things were out there for the American public to see. They could have rejected Donald Trump. They did not. So, that’s been decided by the American people. It’s over."

Reich seemed aghast. "This is a crazy set of arguments,” Reich replied. "Donald Trump came into government saying that he was going to drain the swamp. One of the reasons he was elected is so many are concerned about all this money in politics. All this money in Washington. That was the whole — this anti-establishment fervor that said effectively we don’t want the status quo, we don’t want politics as usual, we don’t want big money in politics, that was what he was elected for."

After Lord replied that Trump's "drain the swamp" refrain was directed at Washington's culture, Reich asked how the president-elect could be so certain that the public doesn't care about his ethical issues.

"Because he’s the president-elect of the United States, that’s how," Lord replied. When Reich continued to insist that integrity matters, Lord dismissively insisted that "the American people made their decision. It’s over. Get on with it."

This isn't the first time that Trump and his surrogates have attempted to dismiss the president-elect's numerous conflicts of interest. Prominent Republicans, from former House Speaker Newt Gingrich to House Majority Leader Kevin McCarthy to House Oversight and Government Reform Committee chairman Jason Chaffetz, have all tried to whitewash Trump's continued involvement in his business empire, which would allow him to personally profit from the policies he pursues as president.

Trump himself has insisted that "the president can't have a conflict of interest," although The Washington Post's Fact Checker has argued that this is an oversimplification of existing law.