Trump is more like a cartoon version of Hitler than the real thing. But sometimes cartoons come to life 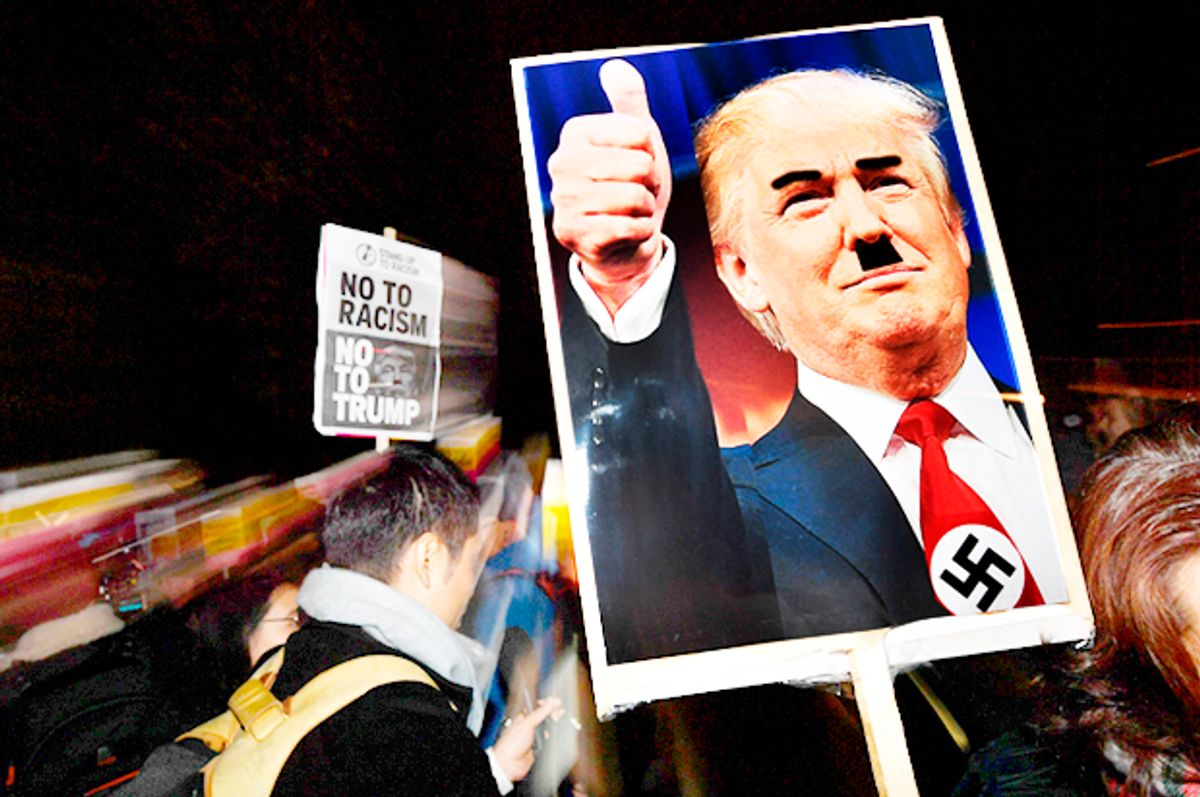 By next weekend, Donald Trump will be president of the United States. That is, I think he will — given everything that has happened throughout the absurdist drama otherwise known as the 2016 presidential election, it’s best not to make assumptions.

Only two axioms have proven true about this bizarre and chaotic presidential transition. The first one is easy: Just when you think things can’t get any weirder, they do. A week ago, we thought it was strange that Trump was praising Julian Assange, and we did not know about the hypothetical existence of a supposed “sex tape” made in a Moscow hotel room, which — if it exists, which it probably doesn’t — does not involve any actual sex. Those were innocent times!

The second axiom is a bit more complicated, but I’ll give it a try: More than a year’s worth of comparisons between Donald Trump and Adolf Hitler, which began as shrill liberal paranoia, have ended up seeming simultaneously more ridiculous than ever and more convincing than ever. If that sounds like an irresolvable contradiction, welcome to America in 2017.

If Donald Trump possessed any significant degree of self-awareness — a logical impossibility, because he wouldn’t be Donald Trump if he did — he probably wouldn’t send out tweets comparing America to Nazi Germany because confidential information is sometimes leaked to journalists. Some mechanism of psychological displacement would seem to be at work here, which like so many other things about Trump would be funny if it weren’t chilling: Porous government agencies and an adversarial press corps are exactly what the monolithic Nazi state didn’t have, and are exactly what Trump would like to get rid of, in the process of Nazifying, or at least Trumpifying, the dysfunctional American state.

As my colleague Chauncey DeVega has previously argued (and argues again this weekend, in an article to be published shortly after this one), more than anything else Trump resembles a “heel” from the world of professional wrestling, who also happens to be an authoritarian political leader with undeniable fascist tendencies in the real world. Trump is something like Hitler, but he is more like a pop-culture parody version of Hitler — the “Heil Honey I’m Home!” version of Hitler — created to entertain an audience that understands this is mostly a joke but isn’t quite sure where the shtick ends and the mass murder begins.

It would be conventional to say that we don’t know what kind of president Donald Trump will be, but it would be closer to the truth to say that what we really don’t know is how bad a president he will be, and how much damage he will inflict on the nation before he leaves office. One of the things DeVega’s pro wrestling analogy drives at, perhaps, is the sense that Trump is more like a phenomenon than a person.

Apocryphal Moscow sex tape or not, Trump's personality and personal biography are of little interest, even to his followers and to himself. Trump struggled to come up with heartwarming family anecdotes for the ghostwriter of his own autobiography, and has said he doesn’t remember much of his childhood. (There’s a bit of Hitler there, too; we’ll get to that.) The Trump phenomenon illustrates what one scholar has described as the principle “that historical greatness can be linked with paltriness on the part of the individual concerned.”

What can I possibly mean (you may be asking) by ascribing historical greatness to Donald Trump, the comical real-estate buffoon who was elected president by accident, despite having absolutely no qualifications for the job? Well, that is his quality of greatness, pretty much. Look what he has accomplished so far; look how he has outfoxed and defeated every opponent. Trump’s peculiar greatness, we might say, is essentially linked to his distinctive quality of excess. It is a tremendous outpouring of energy, for good or ill, that shatters all existing standards. Granted, gigantic scale is not the same thing as historic greatness; there can be power in triviality as well. But Trump is not only gigantic and not only trivial. The eruption he has unleashed has been stamped through every one of its stages by his guiding will.

Throughout his political rise, Trump has had an amazing instinct for understanding what forces can be mobilized to serve his interests and how to mobilize them, and has not allowed prevailing trends to deceive him. At the time he began to move into politics, the entire system remained in the grip of 60 years or more of bipartisan consensus around the norms of liberal democracy. But he grasped the latent opposition to that system, just below the surface, and by bold and wayward combinations seized upon those factors and incorporated them into his campaign.

Trump’s conduct has always appeared foolish to sage political minds, and for years — indeed, virtually to the moment of his final victory — arrogant conventional wisdom did not take him seriously. The widespread mockery heaped upon him has been justified by his appearance, his unhinged rhetorical flights and the theatrical atmosphere he deliberately created around himself. (Again, like a pro wrestling villain.) Yet in a manner almost impossible to describe, he has always stood above or outside his banal and dull-witted persona.

Everything in those last three paragraphs is, I believe, accurate when it comes to Donald Trump, and indeed contains a few flashes of original insight. But I can’t take credit; I didn’t write it. Well, I sort of did: I revised it, edited it and updated the language here and there. In a word, I plagiarized it: All the ideas in that passage, and most of the actual writing, comes from the introduction to Joachim Fest’s famous biography “Hitler,” published in 1973.

Does quoting a biographer making the point that Hitler was a theatrical, manipulative genius with uncanny political instincts, who was consistently underestimated by his opponents until it was too late, prove that Trump is just like Hitler? Of course not. What it suggests, as I said earlier, is that Trump is something like Hitler, and that the type of authoritarian personality — or non-personality, in both these cases — who rises to the top when a democracy collapses conforms to a general pattern. As I see it, the parallels between Trump and Hitler are at once superficial -- because they are different men, in sharply different historical contexts -- and profound, because the underlying pattern is so similar and so disturbing.

Fest’s biography has been superseded in many ways by reams of Hitler scholarship published over the past four decades, but it retains considerable iconic power and remains a work of marvelous, troubling clarity. It was perhaps the first serious attempt made in postwar Germany to reckon with the dictator’s legacy in dispassionate fashion, at a time when many Germans either preferred to pretend Hitler had never existed or viewed him as a demonic arch-nemesis who had no history and required no explanation. Fest rejected both of the ideas about Hitler that were then dominant: that he was a uniquely evil person possessed of almost supernatural powers, or that he was a total nonentity serving the class interests of Germany’s financial, industrial and imperialist elite. Is it too much of a stretch to say that the same stereotypes have been applied to Donald Trump, and that they are just as incorrect now as they were then?

What is most striking about rereading Fest’s “Hitler” in 2017 is his portrayal of the future Führer as an embittered, uncultured provincial outsider, who consistently exaggerated the poverty of his background and who longed to join the upper levels of an urban bourgeois elite that viewed him with evident scorn (until, of course, it was compelled to grovel at his feet). Although the circumstances are different, I hardly need to observe that the parallels are striking.

Donald Trump was born into money and has never completely been able to deny it, although he continues to insist on the myth that his real estate empire was somehow the result of hard work, and that his father gave him only minimal help early in his career. Hitler created a more robust legend around the idea that his family had been “humble cottagers” and that he had pulled himself from rural poverty by his bootstraps, when in fact his father had been a highly respectable customs official for the Austro-Hungarian government, and young Adolf lived on family money for years. Fest reports that Hitler flew into a rage any time actual facts about his background threatened to emerge; his Twitter feed would have been amazing.

So in each case it’s the father who could legitimately be considered a self-made man — Alois Hitler (né Schicklgruber) was the illegitimate child of a domestic servant, and his paternity was never certain — and the son who yearns to leave that struggle behind and ascend to empyrean realms of metropolitan glamour. No matter how rich he got or how many appearances he made in the New York tabloids, to the WASP and Jewish elites of Manhattan Trump has always been a boorish kid from Queens with vulgar tastes and vulgar connections.

As Fest points out, the young Hitler was supposedly an aspiring artist in Vienna during one of that city’s greatest cultural explosions, but he apparently knew little or nothing about the art of Gustav Klimt or Oskar Kokoschka, the music of Mahler or Richard Strauss, the poetry of Rilke. He would later claim to have been a political and artistic “revolutionary,” but was really a frustrated dabbler who sold insipid watercolors to tourists and wandered the city alone in dandyish clothes, “full of sentimental admiration for the bourgeois world” of wealth and power that had conclusively rejected him.

What is Trump Tower but a cheaply made imitation of old-money luxury? And what has Trump’s entire career been, first in business and then in politics, if not (as Fest says of Hitler) the work of a reactionary “partisan of the establishment, paradoxically defending a reality that he simultaneously repudiated.” There could be no better description of the peculiar quality of the emerging Trump administration, which gained power on a promise to “drain the swamp” and overturn the existing order, and now plans to wield power through an assemblage of plutocrats and Establishment insiders unlike anything ever seen in American political history.

As I’ve already said, there are important differences. Adolf Hitler devoted years to building a political movement and a political party, which held to a somewhat coherent (if noxious) ideology. Trump’s movement sprang up virtually overnight, like a bloom of poisonous mushrooms, and is little more than a funnel for existing currents of nationalism, racism and cultural warfare. But both were nourished in similarly toxic soil — the alt-right of Hitler’s day being the anti-Semitic underground, viewed as déclassé by the polite anti-Semites of mainstream society — and both were fundamentally the instruments of one man’s will, whims and outsized persona.

One more important set of differences may be deduced: Hitler was able to unite and mobilize a large majority of German society, and to drive out or crush nearly all opposition. Americans are too lazy — or at least too deeply committed to consumerism and leisure time — to be mobilized on any large scale, and too fractious and diverse to be united about anything. Opposition to Trump is not going away, and once it works through its shock and internal squabbles is likely to forge a formidable coalition.

Trump’s political situation before assuming office is weaker than Hitler’s ever was. Even people who loved his performance as the pro-wrestling cartoon version of Hitler would presumably be less excited about the real thing. Presumably! But the cartoon Hitler is about to become the real president, and the time for pretending that we have the slightest idea what will happen next is long past.