As a proud feminist, I don’t fear alienating men with the name. But progressives need to come together to fight 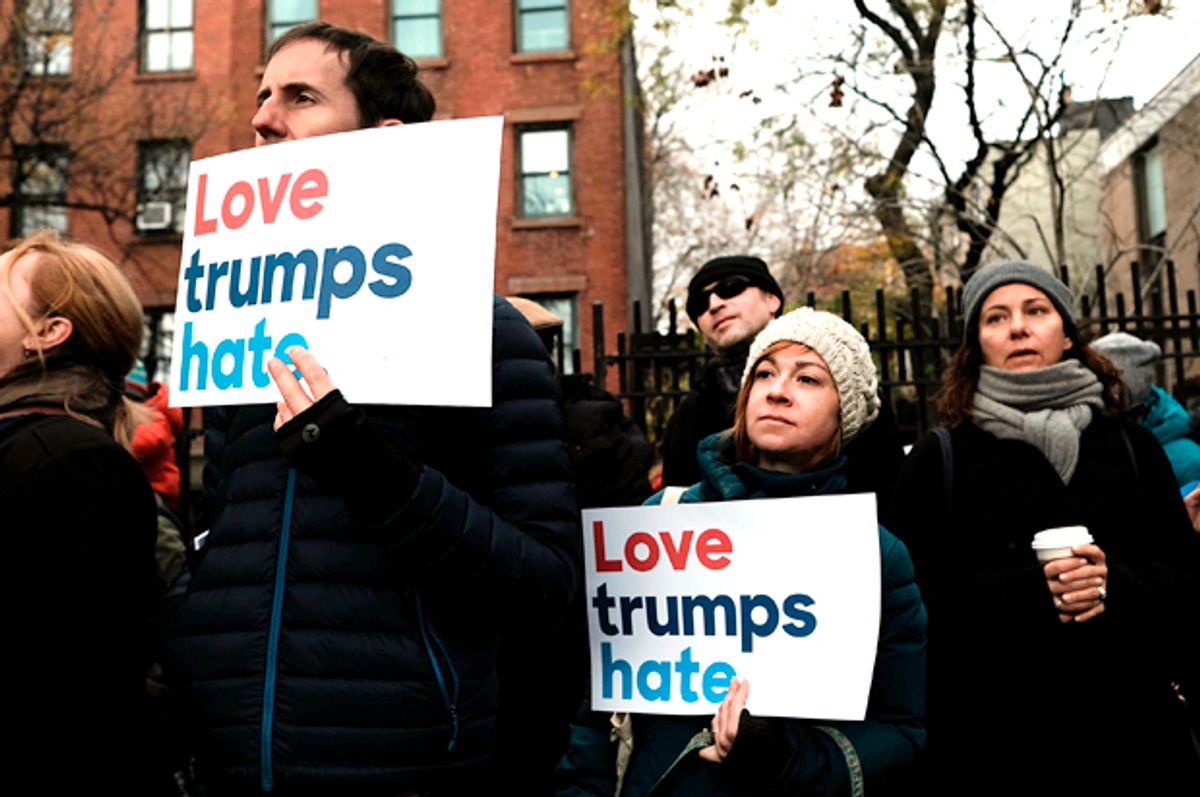 People participate in an anti-hate rally in Brooklyn on November 20, 2016 (Getty/Spencer Platt)
--

The Women’s March on Washington should be named the People’s March. I say that as a lifelong liberal and intersectional feminist activist: This march isn’t a women’s empowerment exercise; it’s a battle against fascistic control of the country. As I’ve written before for Salon, all progressives — not just female ones — should come together as active, intersectional feminists to fight President-elect Donald Trump and the enormous threats he poses to justice for all marginalized groups.

What does this mean? It means that an older man is marching for his family, including his transgender daughter; a straight African American woman is marching for herself and for her white lesbian best friend; a young woman is catching a ride in an old car with a group of her millennial peers because they can't imagine a world where they’re not allowed to protest fascism. This is a time for us to call on our deepest values and realize that the good of the whole is concerned with the good of each one. This is not a time for women to march; this is a time for people to march on behalf of all.

Let me be clear that I do not think the march should have been “the People’s March” out of a fear of alienating men. I want it to be called the People’s March because feminism and fighting Trump isn’t just a woman’s thing. In 2012, among Democratic voters, women identifying as feminists outnumbered men by nearly 2 to 1. That’s unacceptable.

Trump’s proposed economic and social policies will affect women, true — but they will also affect men, children and families, from the repeal of the Affordable Care Act to the weakening of our public schools and endangerment of workplace benefits and the minimum wage. Further, the racism, Islamophobia and misogyny encouraged and spread by Trump throughout his campaign, and the emboldened climate such hate currently enjoys, isn’t only bad for women; it’s also bad for everyone. Everyone who believes this, regardless of gender, should identify openly as intersectional feminists, vote for a feminist agenda, support feminist causes and actively work to beat back sexism.

Feminism needs men, as Rebecca Solnit wrote in her essay “Feminism: The Men Arrive!” “For one thing, the men who hate and despise women will be changed, if they change, by a culture in which doing horrible things to, or saying horrible things about, women will undermine rather than enhance a man’s standing with other men.”

We are at war for the full empowerment of women that takes into account economic justice and full reproductive rights. Just as whites were central to the effort to abolish slavery and the civil rights advances of the 1960s, men aren’t off the hook now. Men need to fight for women’s rights because it is correct to do so, because women are people. Women need to hold them to that commitment.

Simultaneously, these “women’s issues” are issues that affect men, too, and that is often why men are persuaded to care. They get on board when their wives don’t receive the same pay as male colleagues, when their daughters have been victims of sexual violence, when a sister has an abortion.

The issues we usually define as “women’s issues” affect everyone and should not be sidelined as social policy matters. Rather, they are core economic issues. A woman’s ability to control her fertility affects her education, income and status in the workplace. Pay discrimination against women lowers families’ overall income and economic opportunities. The political issues we as a culture so cavalierly dismiss as the concerns of a special interest group (women and girls) speak to the very root of what progressives hold to be paramount: justice.

In her book “We Should All Be Feminists,” Chimamanda Ngozi Adichie wrote, "There’s a problem with gender as it is today and we must fix it, we must do better. All of us, women and men, must do better.” The power of calling Saturday’s event a women’s march obviously has a galvanizing effect on women, who are coming together to exercise their power en masse. But beyond posturing, what does that get us?

We need women to stop saying, “We can stand up for ourselves” (of course we can) and “see our sea of woman power” and instead turned to the men next to us and ask, “Why aren’t you standing up with us?” I agree that men should know this without needing to be invited by name and clearly they can check online to find out more about it if they think they haven't been included and want to be. But the march has a name that is exclusionary. If we now want men to come — and we do — we should make this clear through inclusive language.

If this is a people’s march, all are wanted and needed. (Leave aside the fact that gender is so last century and the whole women, men thing is outmoded. Let’s talk about people instead.) I publish a feminist magazine, Roar: Literature and Revolution by Feminist People, and no one yet has asked me if it's a women’s magazine. While that’s small anecdotal evidence, I do believe that language makes a difference when we are calling on people to act.

In an interview for Salon this week, Eleanor Smeal, president of the Feminist Majority Foundation, agreed. “We need men to stand with women and hold the issues of women’s rights in highest esteem,” she said. “Everything else always seems more important. It’s not. These are life and death issues. They are economic issues, educational issues," she said, adding, "they are not to be set aside.”

Looking beyond the march, we feminists need to be sure to call on all progressives to be intersectional feminists in the fight for the issues laid out by the organizers. Marches are about rallying the troops and energizing and enlarging the base, not directly effecting policy changes. This is a time for us to create a big intersectional feminist tent against Trump — a tent of all people, not just women, who are willing to be in the fight.

It is not the job of women to dismantle a ruling order that they did not create. Even if it were, we don’t have all women on board, but we do have some men. We need to keep all the Democratic voters and progressive independents engaged to fight these issues. The historic gender gap seen in the election of Trump was disgusting. It’s fine to say that if only women voted, Hillary Clinton would have won. But it’s not only women who vote. Progressive men need to start seeing the treatment of women and girls as issues that are as critical to them as any other.