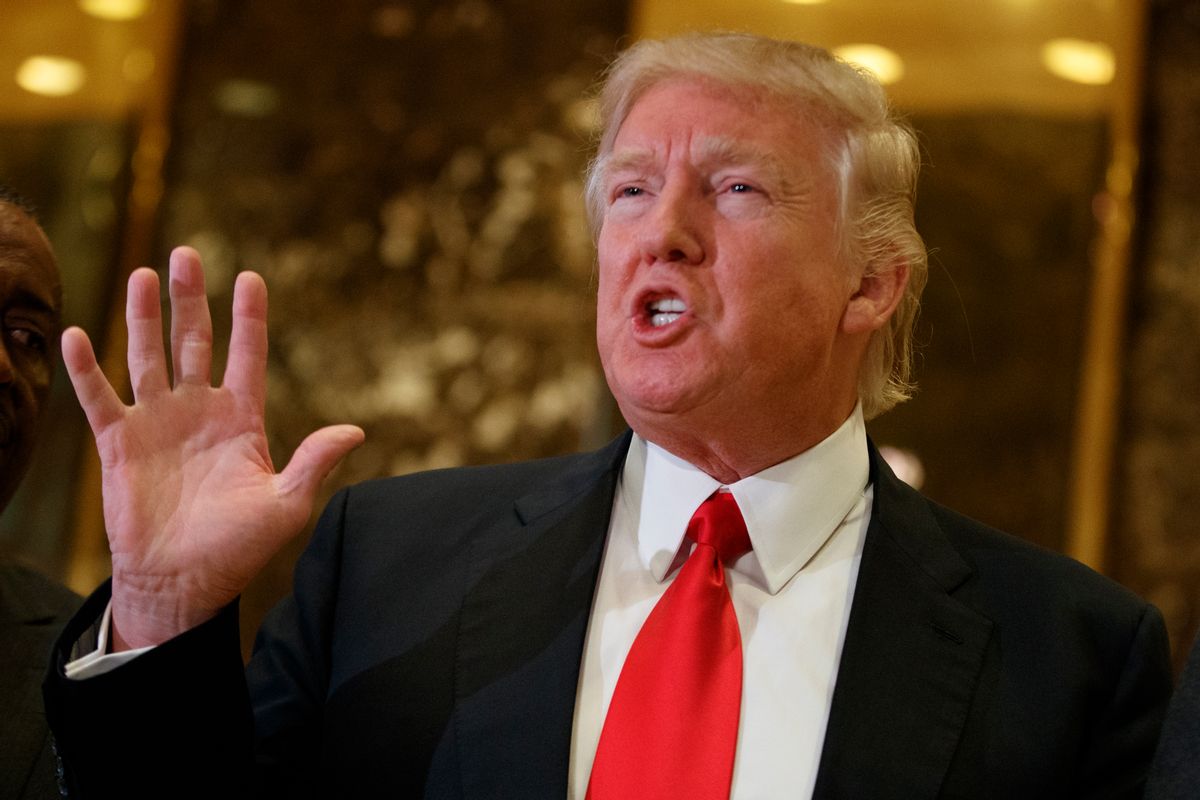 FILE - In this Jan. 13, 2017 file photo, President-elect Donald Trump speaks with reporters in the lobby of Trump Tower in New York. Premiums and the number of uninsured would soar under a Republican bill scuttling President Barack Obama’s health care overhaul that Congress passed last year, lawmakers’ nonpartisan budget analyst estimated Tuesday, Jan. 17, 2017, in a report underlining the GOP’s risks as it starts a fresh push to dismantle and replace that statute. (AP Photo/Evan Vucci, File) (AP)
--

Biographers who have studied Donald Trump extensively all seem to agree that his leadership style is going to be defined by his narcissism, belligerence and deep fear of his own illegitimacy.

In a joint interview with Politico on Wednesday, Trump biographers Gwenda Blair, Michael D'Antonio and Timothy O'Brien gave some very interesting observations about the president-elect.

"This is all about him completely dominating the news cycles — the use of Twitter to distract from any real questions, emphasis on loyalty, vituperation toward anyone he sees who is disloyal or doesn’t toe his line, and his emphasis on conflict, the notion of setting people against each other," Blair said regarding the president-elect's post-election behavior. "Now it’s countries against each other. It’s news organizations against each other."

The Trump experts all agreed that his combative behavior — picking fights with intelligence agencies, Rep. John Lewis, Meryl Streep and Alec Baldwin — has also been quite predictable.

"I also think that he’s the same old Trump and emphasizing this combative quality and wanting to fight with just about everybody," said D'Antonio. "I’ve been asked lately about why he seems to have affection for a guy like Putin. And the thing that I’m afraid of most, based on what I’m seeing, is that he seems to want to be the same style of leader, where he intimidates people. He tries to shame them. The most shocking thing I think he did was note all of his enemies in his New Year’s message. The idea of a president actually having even the thought of all of these enemies in his head as he’s welcoming the new year and greeting the country is almost crazy to me."

Blair argued that these traits can be traced back to his childhood.

There’s a fusion, I think, of his childhood, an emphasis on being combative, being killers — as his dad famously instructed his boys to be — but also, I think, his own competitive nature, and then his grasp in early adulthood that being a bully and really putting it to other people and not backing down often works. He also had his church background telling him that being a success was the most important thing and that got fused with the sort of "You want a crowd to show up, start a fight," P.T. Barnum-type thing early on in his career. And then Roy Cohn as a mentor, a guy who stood for cold-eye calculus about how bullying people works. And you put all of those pieces together, that he’s been doing this his whole life, and I don’t see a single reason for him to back down. He’s going to go full blast ahead with that.

D'Antonio followed this up by mentioning one of Trump's biggest fears — namely, that he's illegitimate.

"One thing I think that we have overlooked as we see Trump trying to delegitimize others is what I suspect is a feeling he has inside that nothing he’s ever achieved himself has ever been legitimate," D'Antonio said:

This is a person who has never known whether anybody wants to be around him because he’s a person they want to be around or they want to be around his money. And since he’s promoted himself as this glamorous, incredibly wealthy person, that’s the draw he’s always given. So he doesn’t know if he has any legitimate relationships outside of his family, and that’s why he emphasizes family . . . He’s always kind of gaming the system — not, in my view, winning on the merits. And even his election was with almost 3 million fewer votes than his opponent. So he has this deep fear that he is himself not a legitimate president, and I think that’s why he goes to such great lengths to delegitimize even the intelligence community, which is the president’s key resource in security, and he’s going to do this demeaning and delegitimizing behavior rather than accept what they have to tell him.

As a result of this fear of illegitimacy, the Trump biographers agreed that he will ultimately only trust people who he views as extensions of himself.

"At the end of the day, the two most powerful people in his White House, other than him, are going to be Jared Kushner and Ivanka Trump, and they’re going to have the final say on everything," said Timothy O'Brien. "And whatever Gary Cohn or Rex Tillerson or General Mattis or Jeff Sessions or Steve Bannon has to say, it will all end up getting filtered through Javanka."

When pressed on his use of the portmanteau "Javanka," O'Brien reiterated, "Yeah. Other than those two, he won’t listen to anyone in a meaningful way, and he never has listened to anyone outside of his core group and family at the Trump Organization for decades, and that’s not going to change."

The most recent prominent challenge to Trump's legitimacy came from Rep. John Lewis, D-Georgia, a hero of the civil rights movement.

Read the full profile at Politico.