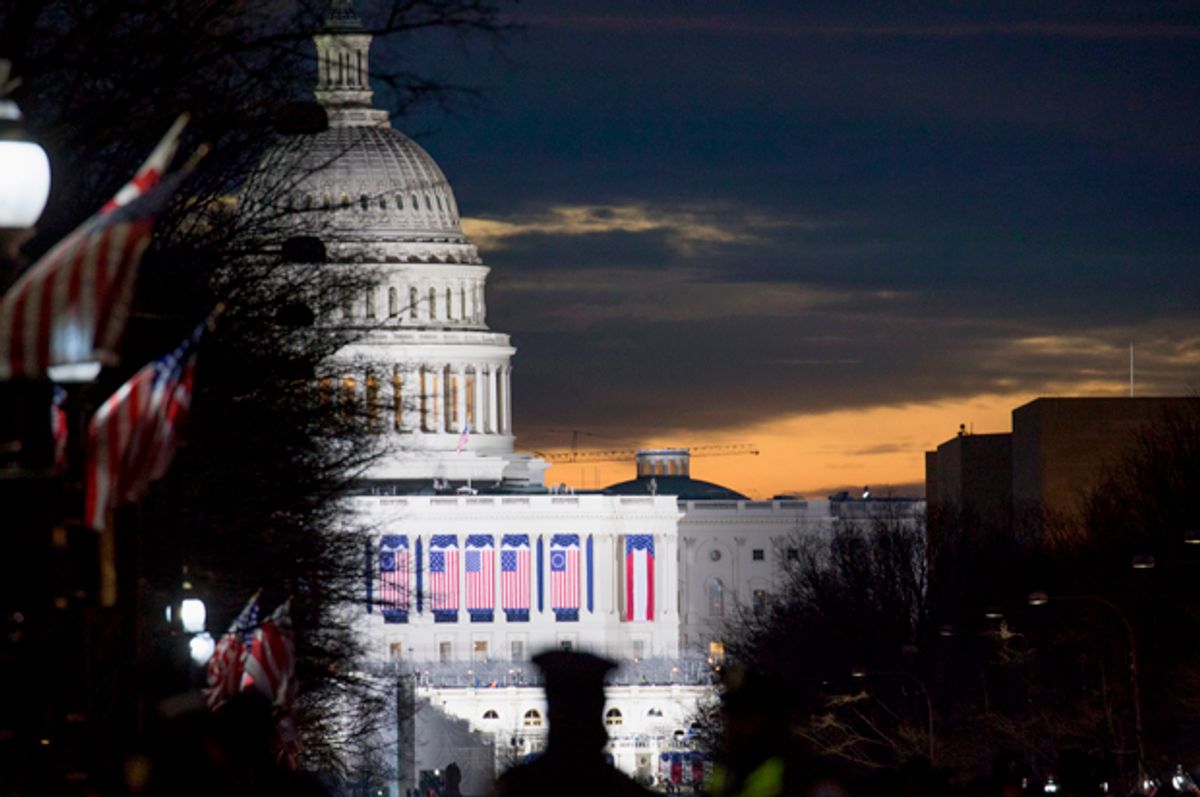 WASHINGTON, DC - JANUARY 20: The United States Capitol is draped in flags in the early morning hours prior to the presidential inauguration on January 20, 2017 in Washington, DC. Donald Trump is being sworn in as the 45th President of the United States. (Photo by Tasos Katopodis/Getty Images) (Getty Images)
--

The American Civil Liberties Union is welcoming President Trump to the White House with a gift — a Freedom of Information Act request about his numerous conflicts of interest.

"Trump took the oath, but he didn't take the steps necessary to ensure that he and his family’s business interests comply with the Constitution and other federal statutes," said ACLU Executive Director Anthony Romero. "Freedom of information requests are our democracy’s X-ray and they will be vitally important to expose and curb the abuses of a president who believes the rules don’t apply to him and his family."

The ACLU pointed out that ethics experts from both parties have said that Trump's failure to address these conflicts of interest leave him ethically compromised from the moment he takes office. It specifically focuses on the emoluments clause of the Constitution, quoting the following passage from an article in The Atlantic written by ethics experts.

The emoluments clause forbids any 'Person holding any Office of Profit or Trust under [the United States]' from accepting any 'any present, Emolument, Office, or Title, of any kind whatever, from any King, Prince, or foreign State' (unless Congress explicitly consents).

The Framers included this provision in the Constitution to guarantee that private entanglements with foreign states would not blur the loyalties of federal officials, above all the president. Yet that lesson seems lost on Trump, whose continued significant ownership stake in the Trump Organization forges an unbreakable bond between Trump and a global empire that will benefit or suffer in innumerable ways from its dealings with foreign governments. Trump’s actions in office will thus be haunted by the specter (and perhaps reality) of divided interests.

The ACLU concluded by saying that they're filing their FOIA request because "we want to know how the Trump transition team and the government offices tasked with supervising ethics-related issues for the incoming administration have been thinking about and confronting these potential conflicts. In pursuit of that information, we’ve asked for a gamut of documents — legal opinions, policy advisories, communications, and more — that address them. And we aim to publish the responses so that the American public can do its job conducting broad-based democratic oversight of the new administration."

Trump's conflicts of interest include, but are far from limited to, owning a Washington DC hotel where he can (and allegedly has) pressured foreign powers to stay, his alleged business ties to Russia in the aftermath of major banks refusing to lend him money due to his multiple bankruptcies, and his continued pursuit of real estate ventures in foreign lands from the United Arab Emirates to Scotland.