Americans generally support reproductive choice — so why does the GOP keep winning on abortion?

Democrats constantly triangulate in search of public opinion, while Republicans are driven by pro-life activism 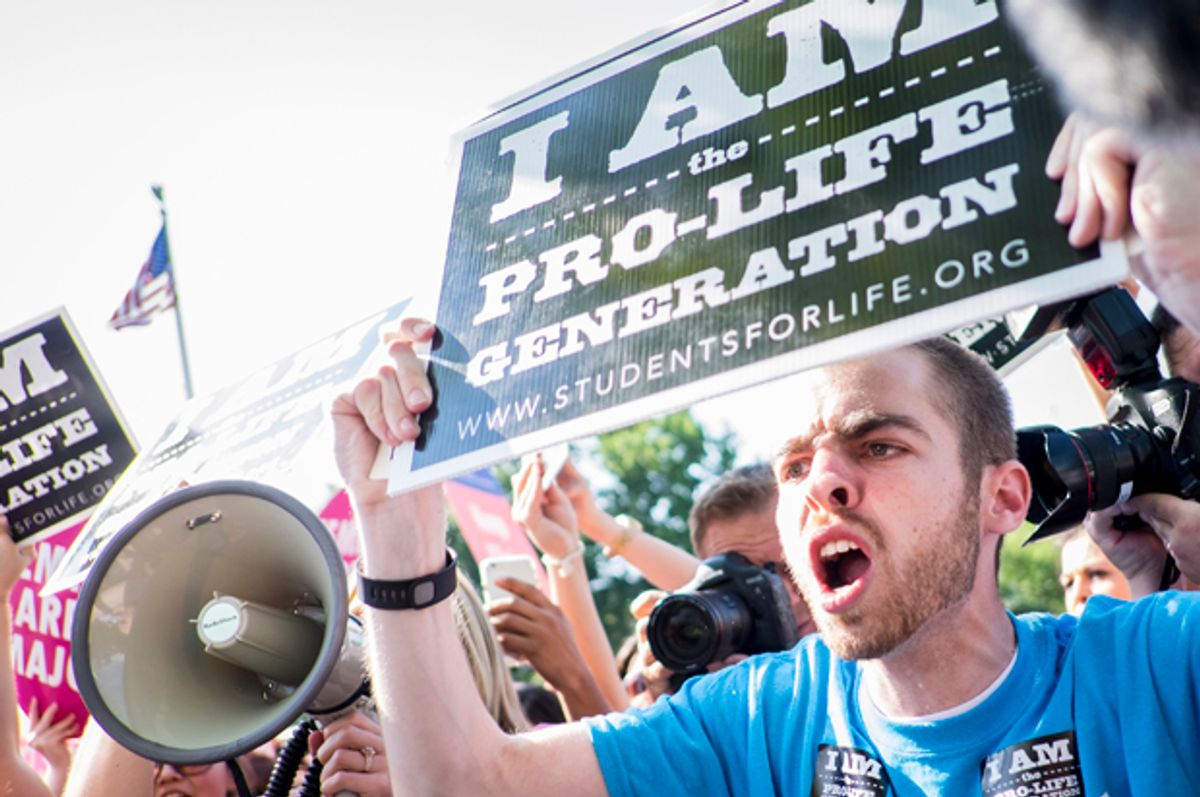 Across the country, there have been new waves of anti-abortion legislation. A recent Guttmacher Report finds that more than a quarter of all abortion restrictions enacted since the Roe v. Wade decision in 1973 occurred in the last five years. For decades, Democrats have been in a defensive crouch on the issue of abortion, believing themselves to be outside the American mainstream, and recruiting anti-choice candidates in the hopes of winning elections. But is this necessary? And are the Republicans really in line with public opinion? In reality, abortion shows how the Republican Party favors and fosters its activist base, while Democrats let theirs wither on the vine.

The Republican Position on Abortion Is Quite Unpopular

The pro-life position on abortion is that the procedure should be illegal or at least virtually inaccessible, and this position been largely adopted by the Republican Party. Their 2016 platform declares, “We support a human life amendment to the Constitution and legislation to make clear that the Fourteenth Amendment’s protections apply to children before birth” and calls for the reversal of Roe v. Wade. This is not merely rhetoric; in states where Republicans have full control, they have nearly eliminated access to abortion services: In five states (Mississippi, Missouri, North Dakota, South Dakota and Wyoming) there is only one abortion clinic. Were it not for court decisions, Republicans would have succeeded in banning abortion at the state level.

This strong pro-life position is quite out of line with public opinion. The Cooperative Congressional Election Study asks a simple question about abortion. Respondents are asked which of the following opinions is closest to their views on abortion:

The share of Americans who believe abortion should always be illegal is consistent across the surveys I examined, and never hits even one-fifth of the American population. For comparison, about 17 percent of Americans support full government control of the economy, 23 percent think socialism is better than capitalism, and 21 percent believe a UFO crashed in Roswell, New Mexico, and the government covered it up.

ANES also includes specific examples about whether abortion should be legal in the following cases:

However, support was lower for legal abortion in the case of financial strain (58 percent opposed) or in order to choose a child’s gender (82 percent opposed). While Americans tend to be broadly pro-choice, they are willing to countenance paternalistic exceptions. The Republican position, however, is that abortion should be illegal in all these cases. A recent survey commissioned by Vox finds that about 27 percent of Americans believe Roe vs. Wade should be overturned. The same survey finds that only 23 percent of Americans believe abortion should be “difficult in terms of travel and logistics,” while 22 percent say women should “have to travel to another community to get an abortion.” So the official Republican position on abortion is far outside the mainstream  of public opinion -- and yet the GOP soldiers on in pursuit of abortion restrictions.

Republicans recognize that making abortion illegal is unpopular, so they make it inaccessible. Republicans work at the state level, particularly in states with large evangelical populations, where their agenda is more popular. Furthermore, the pro-life movement and the Republican Party have found that while it’s certainly true most Americans consider themselves pro-choice, both the public and the courts are willing to countenance modest restrictions, which, when stacked together, can greatly reduce access to abortion.

Republicans build policy around the demands of movements, while Democrats still aim to please a squishy center that rarely rewards the party at the ballot box -- which is how the Republican Party has managed to remain deeply unpopular but incredibly successful. Republican elected officials know that they are far more likely to face negative consequences for opposing the pro-life agenda than by supporting it, even when the pro-life movement is at odds with public opinion. This is particularly true at the state level, where partisan identification is a far more powerful predictor of vote choice than any particulars of a candidate. In much the same way, Republicans are dramatically out of line with public opinion on guns, but succeed due to the strong grassroots support of membership organizations like the NRA and gun clubs. Much like the pro-life movement, the success of the NRA is only partially accounted for by its donor base. In reality, the success is quite a bit simpler: They show up.

Already, Democrats are searching for new ways to message the party, but their real problem is mobilization. Public opinion tells us how the public feels, but elections are determined by who shows up. As sociologist Theda Skocpol notes:

As a media-celebrity outsider, Trump took advantage of Republican organizational weakness to grab the 2016 nomination. But once he got the nomination, he was able to rely not just on party organizations and lots of organized business support, but even more on the cross-state federated networks of the NRA, the Christian right, and the centerpiece Koch organization, Americans for Prosperity. These well-entrenched networks reached into most states and localities and helped Republicans bring conservative voters home and rack up commanding suburban and rural vote margins. While the liberal political cognoscenti mocked Trump for his lack of “ground game,” these groups provided a more than adequate substitute.

Democrats have spent too long treating mobilization as something that algorithms do every four years. It’s something people need to be doing every day, in every community across the country. The Democratic Party needs to embrace such movements, not shun them in favor of anti-political technocracy.

Though the pro-life movement has views antithetical to the progressive movement, it offers key lessons. Among them are the importance of grassroots activism, constant political pressure, a mobilized base, state-level politics and an unrelenting vision for the future. Consider the organizing required to have constant protests outside nearly every abortion clinic in the country year-round. Though the pro-life movement has gained most of its power since the big Republican victories in the 2010 midterms, those victories were rooted in more than a decade of state-level work. As I’ve noted, progressives should use caution when drawing lessons from the right. Some tactics used by the pro-life movement, like violence and intimidation, cannot be adopted for progressive ends.

The Democratic Party needs to learn how to fall in love with movements again. In Nevada, a multiracial culinary union delivered one of the few 2016 bright spots for Democrats: Hillary Clinton carried the state, and Nevadans elected the first Latina U.S. senator (Catherine Cortez Masto) and the first Latino to represent Nevada in the House (Ruben Kihuen). Democrats also won majorities in both houses of the state legislature.

In North Carolina, the Moral Mondays movement, lead by Rev. William Barber of the NAACP, took down Gov. Pat McCrory. On the whole, however, Democrats don’t treat their grassroots well. Rather than embrace Fight for $15, many Democratic politicians held the movement at arm’s length for years. The Movement for Black Lives and other racial justice organizations have met with tepid support, if any, from the party. Elected Democrats voted overwhelmingly to defund ACORN due to footage that was later found to be selectively edited. Unions, a bastion of Democratic organizing and fundraising, have often had their priorities shunted to one side, were largely ignored during the 2016 presidential election and have been left to fight alone under withering assault at the state level. How Democrats plan to fill this organizing capacity is an open question. It’s worth asking whether they really want to.