The business of "Bob's Burgers": From labor issues to the cost of meat, the offbeat family cartoon rings true 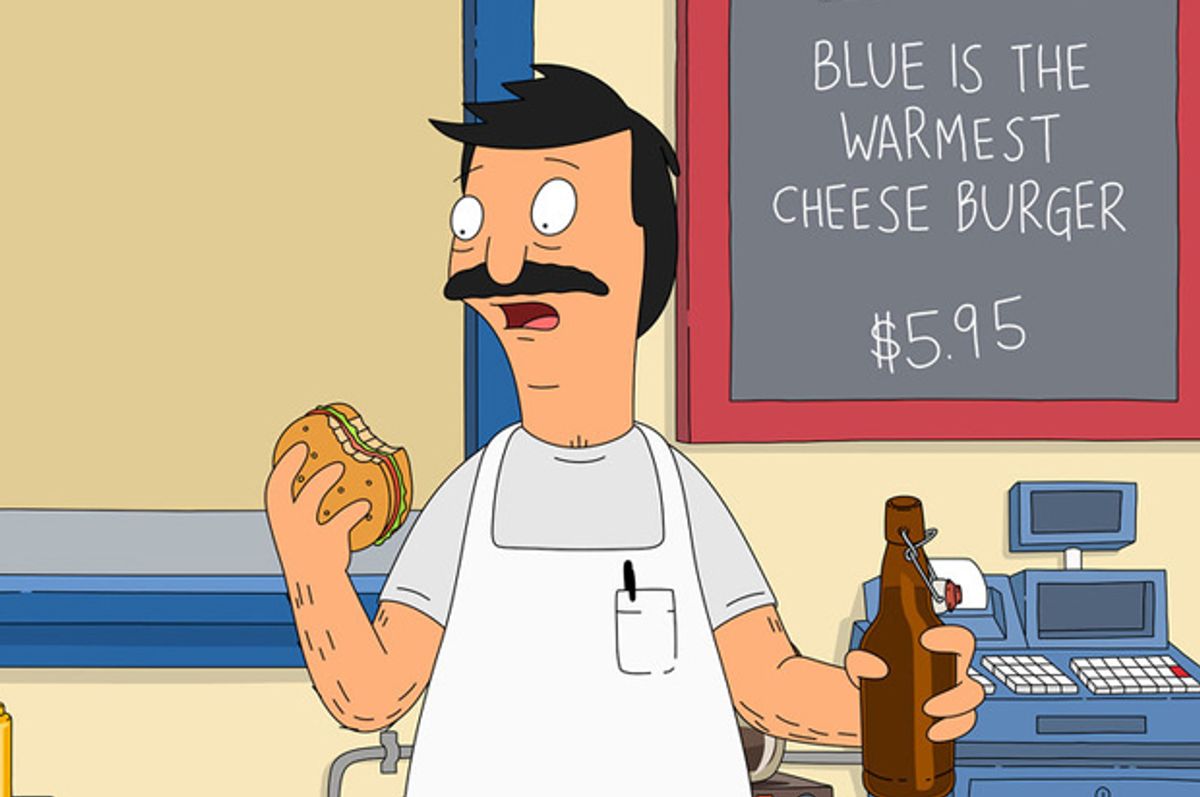 Jesse Huot, the co-owner of Grind Burger Kitchen in Louisville, Kentucky,  says if he had a dollar for every time someone said to him “Oh my god, you guys are just like ‘Bob’s Burgers,’” he’d have enough money to buy a pack of plain white t-shirts and a mustache comb.

The “you guys” are Huot and his wife, Grind co-owner Liz Huot. With a new baby and a burger shop, the couple really is just two kids shy of becoming Bob and Linda Belcher, owners of the Fox cartoon’s titular burger shop. But Huot says episodes of the show also mimic their lives in a different way, namely by showcasing various socioeconomic concerns that face real-life restaurant owners on a day-to-day basis — a topic that feels particularly resonant as industry uncertainty mounts in the days leading up to the beginning of President Donald Trump’s term in the White House.

There are many animated shows that register as more consistently political than “Bob’s Burgers.” As opposed to long-standing series like “South Park” and even “The Simpsons,” this is a program that centers around the offbeat drama of the Belcher family — like in last week’s episode, which explored how eldest daughter Tina’s sprained ankle affects her teen-angst-ridden relationship with Jimmy Pesto Jr., the son of Bob’s longtime restaurant rival — rather than skewering political figures or current events.

But while the show rarely comments directly on current legislative measures, it does highlight restaurant business concerns, like surging meat prices and the difficulty of affording quality staff, with a humorous touch.

Take, for example, an episode this season titled “They Serve Horse, Don’t They?” As you can probably garner from the title, there’s a massive case of mistaken protein identity. Instead of USDA prime beef, Bob accidentally ends up serving his customers horse-meat burgers. Tina, the resident pony lover, alternates between moaning and vowing revenge; Teddy, a regular customer and friend of Bob, ends up hooked on horse.

How did this all happen? It started when Jimmy Pesto Sr., owner of Jimmy Pesto's Pizzeria, returned from the Bahamas with a fresh tan and a glut of unwelcome opinions. “You know, you really do everything wrong, Bob,” Pesto says. “You spend too much on ingredients. You don’t charge enough for your food. You have zero karaoke.”

He then lets Bob in on a little secret: He’s found a new meat supplier who saves him over $1,000 a month. Sounds too good to be true? It is — hence the horse-meat burger debacle.

“We frequently get unwanted advice from characters twice as comically bizarre as Jimmy Pesto,” Huot said. “And don't even get me started on salespeople and other business owners trying to convince us that we need to switch to cheaper, lower-quality products to be successful.”

But for many restaurant owners, looking for a shortcut in this meat economy might be particularly tempting, just as it was for Bob.

Meredith Leigh is a former commercial butcher and the author of “The Ethical Meat Handbook.” She explains that the prices of beef have increased dramatically over the last decades, as alluded to on the show.

“Because [beef] is subsidized by the government, and [cows are] normally fed commodity grains, which are huge export crops — and also subsidized — [the price] is affected by global markets,” Leigh says.

She also says that if the price for the animals themselves is better than the price for beef, there is a downturn in farmers “finishing” the animals — a fancy way of saying that they’re being fattened up for market — which, in turn, increases demand and prices. Pricing also fluctuates on a seasonal basis, as the market tends to have lots of input around meat-heavy holidays, only to become sluggish at other times of year.

“So, to say the least, pricing is a rather complicated subject,” Leigh says.

Another complicated subject that Bob’s Burgers tackles pretty deftly is the difficulty involved in staffing a restaurant.

In a season three episode, “Bob Fires the Kids,” Bob makes the decision to let his three kids, Tina, Gene and Louise — who are essentially unpaid employees — go for the summer so they can enjoy the childhood that he, as a fellow restaurant-owner’s kid, never had. (Tina, Louise and Gene end up working on an illicit pot farm instead.)

Bob decides to hire a replacement employee or two. He hangs a “Help Wanted” sign in the window and begins the interview process. There’s just one problem: He can’t pay the new employee anything. Linda suggests an unpaid intern, but they just end up going with ex-bank robber Mickey, who held Bob hostage about a season back. In return for a hard day’s work, he can sleep on a cot in the basement.

Granted, this is a fantastically exaggerated scenario, but it is a surprisingly apt example of how demanding it is to secure and manage (and yes, pay) qualified restaurant employees.

We are living in an age where there is more demand than ever for back-of-house workers — as the National Restaurant Association reported in 2015, many kitchens feel like they are staring into the face of a major national labor shortage — and yet 32 percent of restaurant workers meet the USDA definition for food insecurity, which is more than twice the national average.

It’s a tough, double-sided situation. The labor shortage will only be improved with time, training and incentives like increased pay; the issue of low pay and food insecurity facing restaurant workers is something that minimum-wage increases, which are not universally supported, seek to rectify. It leaves restaurant owners with a lot of uncertainty and unanswered questions.

That’s where Huot says it’s nice that the series also illustrates the lighter side of managing a kitchen staff.

“Wrangling the Belcher kids is an apt metaphor for managing employees in their 20s,” he joked. “I know my crew would agree that even the most serious situations are still somehow 70 percent ridiculous. I love and care about them, but not every day needs to feel like a ‘Goonies’-style adventure.”