Donald Trump's watching a lot of television, and it's worrying his aides: reports

To understand the president's erratic behavior, you must understand his media addiction, news reports indicate 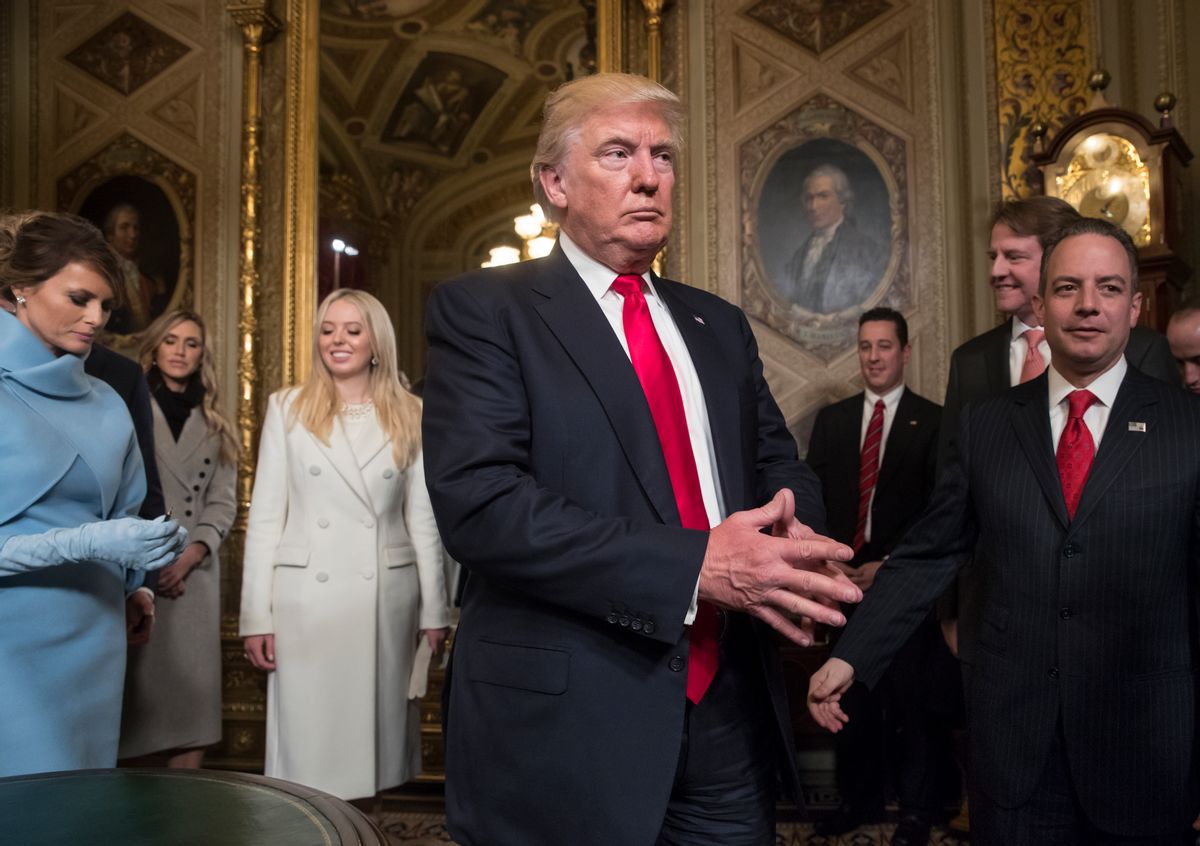 President Donald Trump leaves the President's Room of the Senate at the Capitol after he formally signed his cabinet nominations into law, in Washington, Friday, Jan. 20, 2017. He is joined by his wife Melania Trump and and daughter Tiffany Trump. At far right is Chief of Staff Reince Priebus, with White House counsel Donald McGahn, second from right. (AP Photo/J. Scott Applewhite, Pool) (AP)
--

President Donald Trump is obsessed with the media — consuming it, reacting to it and desiring positive depictions in it. That obsession arises not only out of egotism but also, as recent reports have revealed, from a seemingly uncontrollable fixation on them. (The word "addiction" is not being used here literally but when reading about his media consumption habits, a fitting substitute is difficult to come up with.)

"Print copies of three newspapers," wrote Mike Allen and Jim VandeHei of Axios in a Tuesday article describing the president's media habits on Tuesday. "When Billy Bush was on, 'Access Hollywood' every night. TiVo of the morning and evening news shows so he can watch the tops of all of them. Always '60 Minutes.' Often 'Meet the Press.' Lots of New York talk radio."

Allen and VandeHei also reported that Trump doesn't read books and avoids reports and briefings that he considers too lengthy. That doesn't mean that Trump is hip to advancing technologies, however — he doesn't use computers and rarely uses his phone for anything but calls. Even his infamous tweets are often dictated and then submitted by others. He doesn't follow online news outlets, instead preferring traditional outlets including newspapers like The New York Times and The New York Post (which one friend referred to as "the paper of record for him") and journalistic programs like "60 Minutes."

He is particularly obsessed with TV.

Most mornings, Trump flicks on the TV and watches "Morning Joe," often for long periods of time, sometimes interrupted with texts to the hosts or panelists. After the 6 a.m. hour of "Joe," he's often on to "Fox & Friends" by 7 a.m., with a little CNN before or after. He also catches the Sunday shows, especially "Meet the Press." "The shows," as he calls them, often provoke his tweets. The day of our interview with him, all of his tweet topics were discussed during the first two hours of "Morning Joe."

Indeed, Trump's emotional dependence on positive TV coverage has led to some of his earliest mistakes in his presidency.

On Saturday when Trump saw TV networks comparing his tepid inaugural turnout with Obama's much more impressive showing in 2009, the new president became so infuriated that his advisers were unable to convince him to ignore the negative coverage or to simply respond to it on Twitter, according to The Washington Post on Monday.

Instead Trump demanded that press secretary Sean Spicer denounce the negative coverage on Saturday. Despite widespread criticism that Spicer crossed the line then by blatantly promoting lies about Trump's inauguration (what Kellyanne Conway later referred to as "alternative facts"), Trump apparently was concerned that Spicer seemed too reliant on a printed statement and had not been sufficiently compelling, according to Post. He was more pleased with Spicer's performance on Monday.