The Orwellian nightmare of LGBT rights under Trump: How the new Department of Justice may promote discrimination

What is Pat McCrory's white-shoe hatchet man on the bathroom bill going to do with the civil rights job at DOJ? 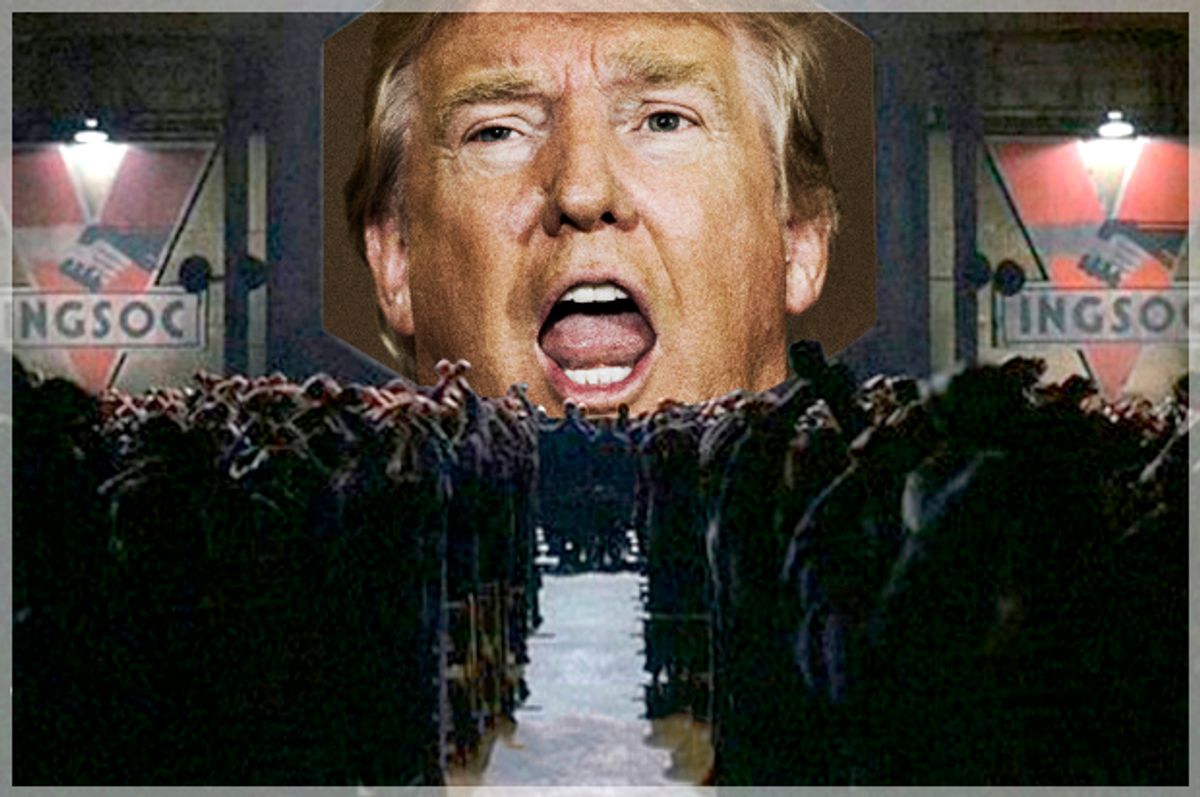 The Orwellian nightmare that is the Trump administration just tapped a new recruit. John M. Gore will lead the Office of Civil Rights at the Department of Justice, as the legal blog Above the Law reported late last week. Gore is a litigator at Jones Day, a Washington-based firm that has been aiding the 45th president’s transition effort. Gore is the second attorney from the firm to make the move to the DOJ. He follows Noel Francisco, an appellate litigator at Jones Day, who will serve as the department’s principal deputy solicitor general.

Putting Gore, who has little experience in defending individuals’ rights in a position where he will be expected to do just that, isn’t just rank cronyism (the kind Trump promised to fight if elected president). It is also a significant affront to the LGBT community.

Gore famously defended the University of North Carolina in a suit brought by the federal government over enforcement of House Bill 2, the state’s controversial anti-LGBT law. The college took a different approach than former governor Pat McCrory, who continued to defend the bathroom bill in the face of widespread criticism, including from the state’s attorney general. UNC claimed that it was not actually enforcing the law, which mandates that trans people in schools and government buildings use restrooms that match the sex they were assigned at birth not their gender identity.

This is despite the school’s initial claims it would follow the law, which UNC's president, Margaret Spellings, later backed off from.

In a statement issued following Gore’s appointment to the DOJ, Mara Keisling, the executive director of the National Center for Transgender Equality, noted the “disturbing” subtext of the choice. “At the core of the Justice Department’s mission is defending our civil rights,” Keisling said. “Mr. Gore’s only civil rights experience is in defending violations of civil rights.”

Comparing the situation to the novel “1984,” Jon Davidson of Lambda Legal argued there’s a twisted irony to Gore’s nomination. The litigator is one of many Trump appointees whose backgrounds appear to be totally at odds with the mission of their post (like tapping a charter school advocate to run the U.S. public education system). Davidson, who currently serves as the organization’s legal director, added that putting Gore within the DOJ goes even further.

“We’re going to have a Department of Justice that will not be doing justice,” Davidson said.

For those unfamiliar with the Office of Civil Rights, the department is tasked with upholding the nation’s civil rights laws, which include everything from the Fair Housing Act to federal nondiscrimination laws. Although allegations of identity-based discrimination are generally handed by the Equal Employment Opportunity Commission, such a matter would fall into the DOJ’s hands if the government was the party believed responsible. Davidson said that during the Reagan and Bush administrations, these types of claims were seldom investigated.

“We’ve been here before,” Davidson said. “Under those presidencies, the Civil Rights division was not much of a force for suing for equal rights for Americans. Instead it put its energies elsewhere, including trying to defend the so-called rights of people to discriminate.”

Given Trump’s support of the First Amendment Defense Act, it’s likely that the DOJ will retreat to its discriminatory past. The bill, which is extremely similar to a law passed by Vice President Mike Pence in 2015 when he was the governor of Indiana, would allow business owners to deny services to LGBT customers based on their belief that marriage is solely between one man and one woman. That legislation, which will be debated in Congress this year, is co-sponsored by Alabama Sen. Jeff Sessions, who may soon serve as Gore’s boss in the DOJ. Trump tapped Sessions as his pick for attorney general, although he has yet to be confirmed.

Because Gore worked on the HB2 case in private practice, the district DOJ guidelines on conflicts of interest would likely preclude his further involvement in the debate over trans bathroom rights in North Carolina. Carcaño v. McCrory, the lawsuit filed by Lambda Legal and the American Civil Liberties Union on behalf of UNC employee Joaquín Carcaño and others challenging North Carolina officials for their enforcement of HB2, is currently pending trial in federal court.

What Gore could do, however, is file in a number of pending cases amicus briefs, which are also known as a “friend of the court” brief, when a firm or individual offers its legal guidance on a case to which it is not a party.

Later this year the Supreme Court will hear G.G. v. Gloucester, a case in which a trans student in Virginia, Gavin Grimm, sued his local school district for access to the bathroom that matches his gender identity. Although the Obama administration announced last year that it would extend its interpretation of Title IX of the Education Amendments of 1972 to include protections for transgender youth in schools, Pence has already promised to roll that back. It’s unlikely that under a Trump administration and a DOJ run by Sessions, Gore’s legal opinion on trans rights will be cause for celebration.

In addition to the Grimm case, the DOJ will also oversee two other important cases affecting the LGBT community. One concerns the federal government’s definition of Title IX; the other relates to the national battle over Obamacare. Last month a Texas judge ordered a preliminary injunction halting adoption of Section 1557 of the Affordable Care Act, a provision that would prohibit any “health program or activity any part of which received funding from HHS” from discriminating on the basis of gender identity or sexual orientation.

There’s a crucial distinction, though, between these cases and the upcoming Gavin Grimm trial: The DOJ is actually named as a party in these suits, and that’s not a good thing. Gore’s boss voted against the ACA in 2010.

Gore could do further damage to federal legislation in his new role, as Sarah Warbelow, legal director for the Human Rights Campaign, explained. “The Matthew Shepard and James Byrd Hate Crimes Prevention Act and the Violence Against Women Act both provide explicit protections for sexual orientation and gender identity,” she said. Both of these laws could be in jeopardy if the new head of civil rights elects not to enforce them.

We know where Sessions, who has a long track record of fighting equal rights, stands on these laws. He has voted against reauthorizing the Violence Against Women Act and against recognizing sexual orientation and gender identity in national hate crime legislation, believing that cases of anti-LGBT bias attacks were already being handled appropriately.

When it comes to Gore, his stance something of an open question. What we do know, however, is that he has spent his entire career attacking the rights of marginalized communities. The litigator has repeatedly defended states accused of discriminatory redistricting designed to pack voters of color into districts where their numeric power can be neutralized — as has been the case in Florida, South Carolina and Virginia. The Intercept reported that in two of those states Gore “also intervened on behalf of Republicans to defend new voter ID laws, rules civil rights group have assailed for reducing participation rates among African-Americans.

Following the removal of all references to LGBT people from the White House’s website, advocates believe that Gore’s appointment — which does not require confirmation by  Congress — is another sign that the Trump presidency will devastating for queer people. The POTUS most recently signed an executive order instituting a hiring freeze on all federal jobs outside of national security, which will impact the restaffing of departments like the Office of National AIDS Policy. There’s been little good news for LGBT individuals in the past week.

“This certainly signals to the LGBT community that the incoming administration does not take the community’s needs seriously,” Warbelow said, “and may not intend to be a government for all Americans.”