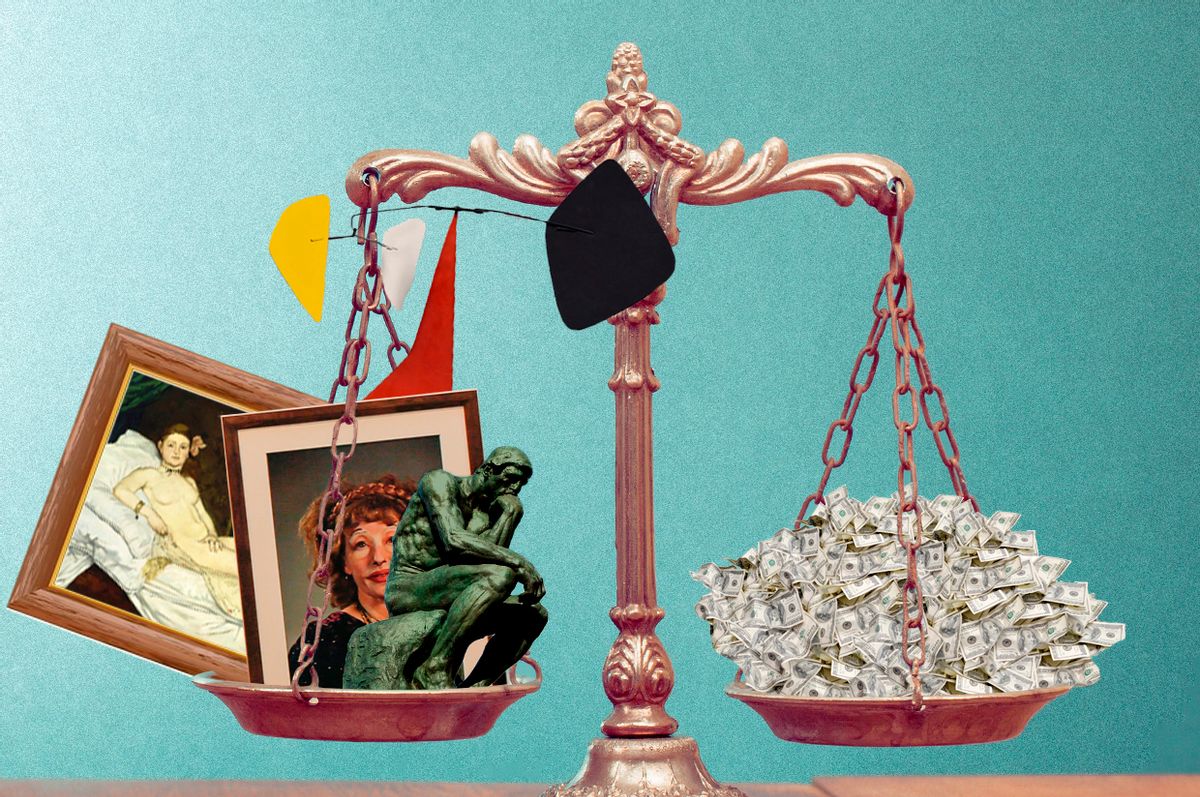 I spent more than a decade working for an organization that defended the National Endowment for the Arts. Every year, like clockwork, some Republican would magically balance the federal budget by gutting two agencies (the NEA and the National Endowment for the Humanities, or NEH) that account for one one-hundredth of one percent (.0001) of federal spending. For reference’s sake, our government spends roughly as much on paper clips and copy paper as it does on all of the nation’s theaters, museums and libraries combined.

I can provide that little factoid because I used to write little opinion pieces whenever efforts came up to eliminate these agencies. I’d help get a lobbyist involved, draft a response, activate tens of thousands of members to write and call their elected officials — the whole big show. Somehow (and it had nothing to do with our efforts) the agencies would survive.

But this is not like those other times. Today, the agencies are in real danger. Long a target of conservatives, there is nothing — and I mean nothing — preventing Republicans from finally achieving their decades-long goal. Paul Ryan, Mitch McConnell and Donald Trump all want them gone. Democratic legislators traditionally sympathetic to the agencies will be too busy trying to preserve little things like Medicare, Social Security and the very concept of public education. Even if the agencies do survive the coming Trump budget, they will be a shadow of their former selves — and they are already a shadow of their former selves.

As cultural leaders, we must face the fact that the NEA and the NEH as we have known them are likely to be completely dismantled in the next 24 months. We must also accept our culpability in the great dismantling, and recognize the critical opportunity before us.

When George W. Bush was elected, Dana Gioia — a critic, poet and pioneer in the marketing of processed foods — was appointed to lead the National Endowment for the Arts. Under Gioia and Bush, funding for the NEA and NEH actually increased, and for a time, arts leaders began to believe that “only Nixon could go to China.” As a marketing executive and conservative poet (a rare bird indeed) Gioia adeptly pursued a shrewd political course — making sure federal funds were strategically distributed to the right congressional districts, building private partnerships with concerned corporate citizens like Boeing, and launching splashy, uncontroversial initiatives like Operation Homecoming, the Big Read and Jazz Masters.   Following a broader trend in institutional philanthropy, the NEA began to emphasize metrics, deliverables, sustainability and the like, and the agency’s tag line reflected this new thinking. The slogan went from “Art for Art’s Sake” to “ArtWorks.”

Under Obama the agencies endured largely due to dysfunction. The arts and humanities were not a priority for Obama.   Although the agencies were eliminated in several House Budget drafts, the government’s inability to pass actual budgets led to one CR after another. (A "CR" is a "continuing resolution," which basically means Congress opted to preserve funding at current levels for the next fiscal year.) The agencies limped along for years, and during those years, the obsession with metrics, deliverables and other corporate business practices only deepened.

I’ve worked in the arts for 25 years. In all that time, I’ve never met a single artist or cultural leader who has said to me, “You know what I’m really passionate about? Improving math scores, creating exports, advancing health care and helping local merchants.” To be fair, the first reason on the list (“Arts promote true prosperity”) does make the case worth making — that the arts are central to our humanity. But even this argument is cloaked in cynical economic parlance. Items 2-10 on the list are the real defenses that arts leaders parrot — that the arts are only valuable insofar as they are economically beneficial, or they are good for the “real” academic disciplines like math and science. (The “social impact” defense argues that the U.S. military uses the arts to “promote troop readiness and resilience.”)

All of it is very clever, and at least some of it is true. But none of it has much to do with the true value of the arts and humanities. The arts and humanities have value because they make us better human beings. That’s basically it. They teach us history and encourage virtue, they help us debate serious issues in a respectful (or sometimes indirect) manner, they make us appreciate beauty, they make us more empathetic and they challenge our own beliefs. All of this helps ensure a skeptical, human and responsible citizenry. And if you don’t think that has value, well — what rock have you been living under?

A humanistic culture does not select a crazy demagogue to lead it. We are no longer a humanistic culture. One of the reasons we are not is because we, as cultural leaders, have abandoned our charge to create that culture, and do so without shame, apology or equivocation. We have spent far too much time articulating the economic and ancillary benefits of our disciplines and not enough time actually building and serving the culture.

Instead of focusing on our core artistic and humanistic missions, many cultural organizations have (out of necessity) become quasi-social service agencies, filling critical gaps in public education, health care and even care for our returning veterans. All of this is laudable work, but why have we done it? Why aren’t our public schools doing it? Why aren’t hospitals and the VA doing it? Isn’t that their job?

If we’d like to discuss metrics, deliverables and results, then we must ask how our interests have fared by employing this economic strategy. The main reason you have a lobbyist is to advance your priorities as central to the republic, and to preserve those federal agencies and policies that support those priorities. Americans for the Arts has spent years and tens of millions of dollars advancing this neoliberal defense. Have we seen a steady increase in funding for agencies like the NEA and the NEH? Or have these agencies teetered on the brink of elimination for more than a decade? Funding for both of these agencies is far below what it was in the early 1990s, even as the federal budget has nearly doubled in size. For too long, arts leaders accepted a foolishly low bar for success: the mere preservation of these agencies has been accepted as victory.

Perhaps private funding for the arts has increased? Not exactly. When it comes to institutional philanthropy in general, we have seen funding for purely artistic and humanistic endeavors shrivel up and die. Gone are the days when national private foundations made unrestricted gifts to cultural institutions simply because it was seen a self-evident public good, or because museums, theaters and libraries obviously need money to continue operating. As a result, we have contorted our programs to serve agendas that would’ve seemed bizarre 50 years ago — after-school care, basic arts education (long eliminated from most public schools, another failure), even job training and cancer care.

Where, exactly, are the results? They are not to be found in the opinions of our policymakers. Regardless of political party, politicians love to mock the worthlessness of the arts and humanities — as Barack Obama, Marco Rubio, Jeb Bush and Donald Trump have all done. You won’t find results in our educational system, which now almost goes out of its way to ensure that our children are not exposed to silly things like virtue, skepticism, empathy and aesthetic beauty. You won’t find results on college campuses, where liberal arts programs are being decimated across the country.

The strategy of advancing the economic benefits of the arts has failed. The failure has been demonstrable and total.

Tellingly, in the predictable outrage over the proposed elimination to the agencies, Robert Lynch, head of Americans for the Arts, did not even bother to appeal to the intrinsic value of the arts and humanities. He seemed to think that the opposition simply didn’t understand, and all would be well once it was explained.

“The NEA is different today. It does work for veterans and the military, benefits the economy and job development and community development," he said to the Washington Post. "President Ronald Reagan thought eliminating the cultural agencies was worth considering, but he changed his mind, becoming a staunch advocate. A number of years later, the Gingrich Congress wanted them eliminated. In both cases, Republicans turned it back.”

The opposition understands perfectly. They’ve got all our little charts, reports and statistics. They just don’t care. They have never cared, and they will never care. We have not succeeded just because our opponents have temporarily been impeded from achieving their political objectives. All we’ve done is slow them down. It’s a Fabian strategy, and while it may have saved us from destruction, the threat will never disappear until we take the battle to Carthage.

That’s something I learned from history. Remember history? We used to think it was pretty important. Don’t we wish everyone had a good sense of history right about now? Wouldn’t it be nice if we’d made it a national priority?

Our opponents actually believe in something, and they have the courage of their convictions. They will always advocate for the elimination of the NEA and the NEH, and they will do so for myriad ideological reasons — to wit: it is wasteful government spending, it is not the government’s job to support the arts and humanities, these agencies are merely pork programs for blue states and liberals, and the arts and humanities are detrimental to the larger conservative agenda.

The opposition does not accept the concept of immaterial value. In fact, the belief in such a concept is viewed as naïve and illegitimate — but sadly not just by the opposition. Cultural leaders and our advocates have embraced that cynicism as well. We have helped our opponents achieve their goals by cozying up to their neoliberal fantasy. We have accepted that the only value in life is monetary, and if something isn’t immediately measurable, then it should not even be discussed.

It is awful that we may now face the elimination of the NEA and NEH, and I will do everything I can to prevent it from happening. But this crisis presents a remarkable opportunity for cultural leaders. We can extricate ourselves from this colossal strategic failure, and return to our true business: rebuilding the culture. We should stop being ashamed to believe in a value that cannot be weighed, measured, cut, or quantified — and to try and convince others to believe it, too.

I’ve floated these ideas to a few of my friends who work in the arts — privately, of course, because one never wants to utter such things in public. Almost all of them have said the same thing, and in the same weary, confused voice: “Well, yeah, Burriesci­­, I mean, I agree — but that’s just idealism.”

That’s all it is.

Matt Burriesci is the author of "Dead White Guys: A Father, his Daughter, and the Great Books of the Western World," and "Nonprofit," which won the AWP Award for the Novel. He is the Executive Director of the Providence Athenaeum, an institution devoted to advancing the humanities. He began his career at the Tony-Award winning Chicago Shakespeare Theater, and has served as Executive Director of both the PEN/Faulkner Foundation and the Association of Writers & Writing Programs (AWP). During his work at AWP, he helped build the largest literary conference in North America.