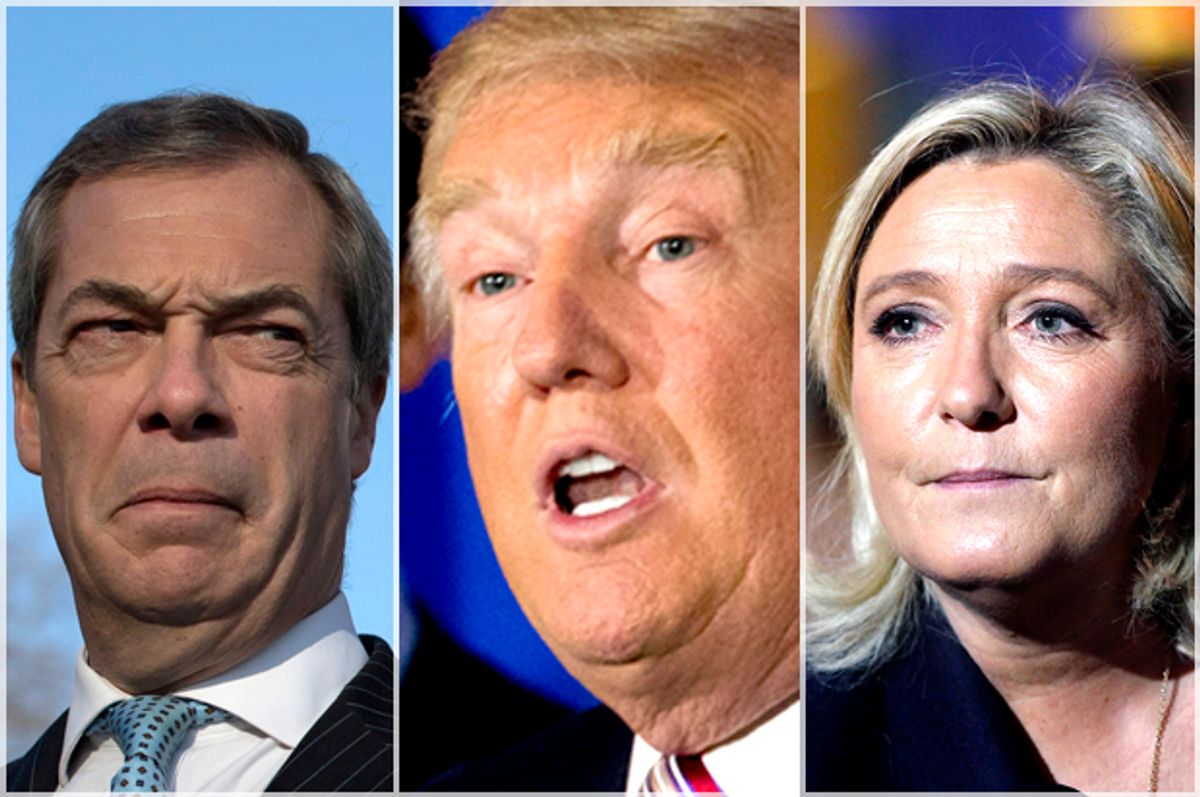 Donald Trump likes to portray himself as a super-patriot who is only interested in restoring America to some misty and mythical former glory days. But as his first week in office demonstrated, Trump's ideology owes as much to European right-wing extremism, including its neofascist tendencies, as it does to any homegrown ideology, extremist or otherwise.

To truly understand Trumpism, it's important to understand how much of it is an imported ideology, lifted directly from the European far right and injected into American political discourse, often without any real effort to adapt it to local conditions.

To be clear, racism, white supremacy and anti-immigrant bigotry have long been problems in the United States, and Trump certainly capitalized on those sentiments on his way to the White House. But what is peculiar about him is how much of his actual ideology is imported directly from the European right, and how he is mainstreaming views into American discourse that really had no traction before.

"We shouldn’t forget that the radical right in the U.S. has been talking about building a wall on the Mexican border" since long before Trump came on the scene, said Heidi Beirich, director of the Southern Poverty Law Center's Intelligence Project, in a phone interview.

But what Trump has done, Beirich continued, is distinctive. He has married these existing American beliefs to an alien ideology, as evidenced by the sudden surge of right-wing obsessions previously unknown in the U.S.

When Trump started running for president, there was little or no indication of any grand plan to align himself with the European right. He opened his campaign with anti-immigrant sentiment, to be sure, but in those early days when he was yipping about Mexican immigrants being "rapists," Trump seemed to channel a homegrown tradition of xenophobia, the kind that led to the "papers, please" law in Arizona and anti-immigrant extremist groups like the Minutemen.

But at some point during his campaign, Trump started pushing borrowed ideas, starting with the focus on Syrian refugees as a major political issue. Beirich noted that she has friends who work in refugee resettlement, and until Trump put the issue on the national stage, they never got negative attention for it.

It's worth taking a step back and really noting how bizarre it is that there's so much hostility to Syrian refugees in the U.S. When Trump started his demagoguery about this issue last August, the U.S. had only allowed 8,000 Syrian refugees to enter the country, compared to the hundreds of thousands who had traveled to Western Europe. The total number of Muslim refugees to enter the country in 2016 was about 39,000, equivalent to 0.01 percent of the U.S. population.

Simply put, most Americans wouldn't even know that Muslim refugees existed at all, if Trump and the right-wing media weren't constantly scaremongering about it. In Europe, racists actually run a chance of encountering the people they hate so much, but in the U.S., the idea of "Syrian refugees" has as much daily impact on people's daily lives as the idea of unicorns frolicking in your yard.

This suggests that one of the main reasons for the Syrian refugee scaremongering — and for Trump's executive order blocking resettlement efforts this week — is to signal to the European right that he and his followers are part of a larger international movement of white nationalism.

“I think that Europe has made a tremendous mistake by allowing these millions of people to go into Germany and various other countries. And all you have to do is take a look. It’s a disaster what’s happening over there," he said.

“There have already been close relationships between Trump and Nigel Farage of UKIP [UK Independence Party]," Beirich pointed out, as well as with former London mayor Boris Johnson, a leading anti-immigration figure in Britain's Conservative Party, and Marine Le Pen, leader of the National Front in France. "All those people are connected through the European Parliament," Beirich noted.

Beirich credits much of the European tilt to Trump's ideology to White House strategist Steve Bannon, former head of the right-wing website Breitbart News, which he used to channel European white nationalism to an American audience. Bannon has been explicit in his enthusiasm for building an international coalition of right-wing radicals, and his site often provided glowing coverage to anti-immigration and white nationalist movements in Europe.

Breitbart itself has expanded into Europe, beginning with a British site and expanding into Germany and France. Media Matters recently highlighted the work of one of the most popular writers for the London edition of Breitbart, an unrepentant racist named Virginia Hale.

"My job involves me going through Euro papers every day -- I see the ruin brought to [the European] continent by invaders," Hale said last May.

This enthusiasm for an international white nationalist movement may also help explain why Trump seems to feel so positively toward Russian president Vladimir Putin, apparently dismissing all concerns over Russia's oppressive crackdown on human rights and its military aggression.

"In Trump’s eyes, the enemy isn’t Russia," Will Saletan of Slate wrote in December. "It’s the part of America that opposes him."

That bizarre set of priorities suggests that Trump doesn't view the presidency as most, if not all, presidents before him have. He isn't really a traditional head of state, here to represent all Americans to the world. He's the vanguard of the American branch of an international white nationalist movement, and as such is likely put the preferences of European right-wing radicals ahead of the national interests of his fellow citizens. His wide-ranging attack on our existing immigration and refugee resettlement systems is likely just the first shot in a longer war.