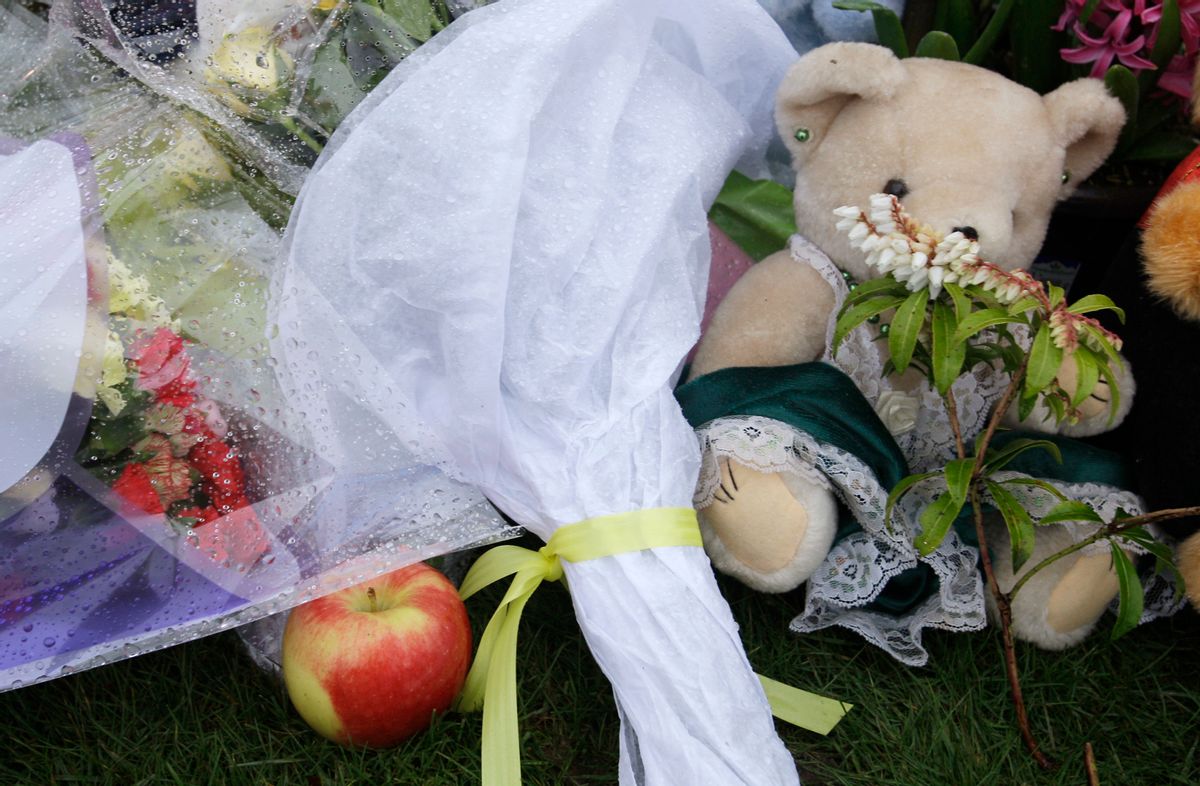 FILE - In this Feb. 26, 2010 file photo, an apple, stuffed animals, and flowers are among the items placed at a growing memorial to slain teacher Jennifer Paulson across the street from Birney Elementary School in Tacoma, Wash. When the economy tanks, school shootings rise, unlike other violent crime, a new study finds. A multi-disciplinary team of researchers at Northwestern University analyzed data from 379 shootings in schools, not just mass shootings or gang involved ones, between 1990 and 2013 and found an interesting correlation between changes in national and local unemployment rates and how frequent the shootings happen. (AP Photo/Ted S. Warren, File) (AP)
--

School shootings rise when the economy tanks, according to a new study of U.S. schools, even as violent crime in general appears to be unaffected.

Researchers analyzed data from 379 shootings in schools between 1990 and 2013 and found a link between changes in national and local unemployment rates and the frequency of shootings.

Most were targeted attacks — often not fatal — and suicides, according to the study in Monday's journal Nature Human Behaviour. Only six percent of the shootings studied were random mass shootings.

Using a complex statistical analyses, researchers found "with very, very high confidence" there are specific time periods when school shootings are higher than others, said study co-author and data scientist Luis Amaral, a physicist and co-director of the Northwestern Institute on Complex Systems.

"Above 5.7 percent (unemployment) you start to really detect an in increase," in the frequency of school shootings, Amaral said.

Some experts not involved in the research did not find the study convincing, in part because different types of gun violence at school — random and targeted, and fatal and non-fatal — often have completely different motivations and root causes.

Criminologist James Fox of Northeastern University said the hypothesis of economic stress and gun violence doesn't apply to younger shooters who wouldn't be thinking of entering the workforce.

Amaral argues that when joblessness is high, "there's sort of a loss of hope and increasing anger," Amaral said. "We think there is a kind of anger that gets pent up as these things happen and it comes out as violence."

And while economic crime goes up with the unemployment rate, the statistics show that the rate of violent crimes like murder and also rape don't go up and down with the unemployment rate, Amaral said, citing existing crime statistics. He said that's the result of a broader and more complex set of factors that affect violent crime rates outside of schools.

Crime From The Wires School Shootings Us Economy