Don't call them inspirational: "Looking at the Stars" chronicles the determination of blind ballerinas in Brazil 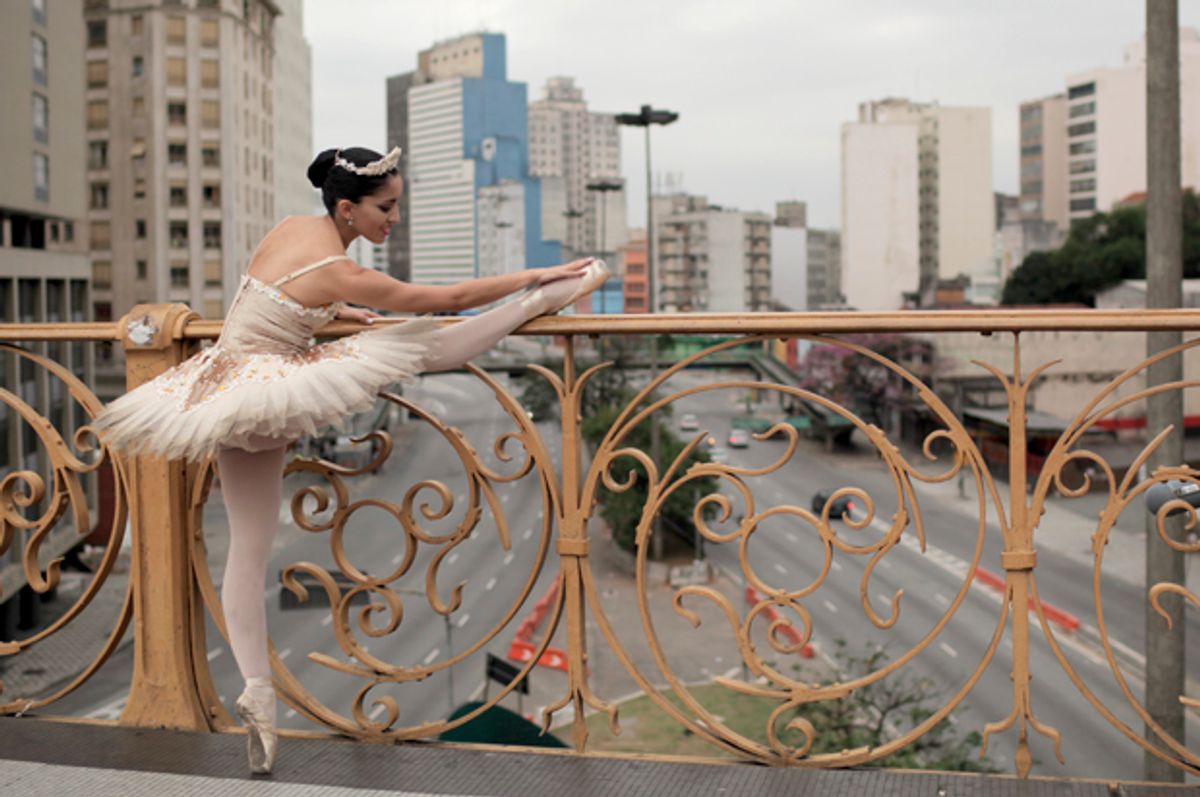 A still from "Looking at the Stars" (Alexandre Peralta)
--

The lovely, heartfelt documentary “Looking at the Stars,” playing at the Dance on Camera film festival in New York City this Friday, profiles dancers from the Fernanda Bianchini Ballet Association for the Blind in São Paolo. Currently, the school enrolls 300 students. Sixty percent are blind or visually impaired. Thirty percent have other disabilities and 10 percent have no disability.

Geyza Pereira, who has been sightless since age 9, was one of the school’s first students. She has since danced on stages in Brazil and become a teacher at the school. One of her pupils, Thalia Macedo, a teenager, is also featured prominently in the film.

Director Alexandre Peralta spent four years making the documentary, having completed a short film version in 2014. While “Looking at the Stars” has some fabulous dance sequences, it is equally strong in showing the quotidian aspects of his subjects’ lives. Scenes depicting Geyza and Thalia rehearsing and performing are contrasted with episodes of Thalia taking a walk or Geyza cooking and washing the dishes.

What emerges is a nuanced portrait of these women, who grapple with independence and insecurity. “Looking at the Stars” is less an inspirational story of overcoming disability and prejudices, and more about the discipline and determination of these fine young dancers.

Peralta chatted with Salon about his documentary.

You started this film by making a short about Geyza and the school a few years back. How did you discover her, and why did you want to make a film about her?

I found out about the school first. I’m from Brazil, and I went to college in São Paolo. In my last year of college — I was studying advertising and marketing, not film — a friend of mine read about the school and said we had to make a film about it. I later realized I walked by the school every day on my way home from college; I lived two blocks away.

The school sounded so fascinating. I wanted to know what this place was. I went there in 2012 and someone told me about Geyza. I decided I wasn’t going to make a film about her, but when I saw her, she had this posture. There was a light on her, and she was incredible. Then I saw her dancing and teaching, and there was no way I could not make a film about her.

Can you talk about your approach to the subject? “Looking at the Stars” is not an “inspirational” story of overcoming disability. It’s a very realistic documentary about these women whose lives are enhanced by dance.

The first time I saw them dancing, there was something about them which was more interesting. Not that the dance is not interesting, but once you know the back story, the dance becomes more powerful. We wanted to show the similarities between Thalia and Geyza. I wanted subjects you got to know — not only their challenges as blind people, but also as humans. That was the idea. It’s one thing to film them onstage or at the school, but being part of their lives, we were very lucky to get the access we did.

The young women balance life and dance. How did you assemble the film to maintain this delicate balance?

The whole process was very organic, and it felt right. We were not looking to make the performance more important than it actually was. I wanted to make it a parallel. The performance is doing something important for the school. There is this choreography and there is pressure, but they are changing in their lives, too.

It was about having this balance; their home life is affected by ballet and ballet is affected by their home life. We were tempted to make a “performance” movie because it’s simpler and easier; you see their challenges and their success. But the turns Geyza’s life took influenced how we structured the film. You understand the first hour how important ballet is for her [and Thalia]. So in the last act, you really feel their emotions.

Geyza explains that she “transforms herself through dance.” I thought it was a beautiful expression. Can you talk about that?

I think, as she says, ballet saved her. She lived in the mortheast of Brazil, in a rural area, and she gets sick and loses her sight at the age of 9. A month after that, she learns to dance with Fernanda, and in a way, ballet replaced her sight. That is how she sees the world now. It’s an important part of her life. Things change, but she will do everything she can to dance. She’s nothing without dance.

Thalia says she is “more goofy than delicate.” I like that she is not aspiring to dance professionally, but does it more for love. What observations do you have about her character?

Thalia was one of Geyza’s students. She came in late to the class, and I felt there’s something about this girl! I wanted to know more about her. She has a charisma and a personality. She doesn’t need to say much and you really like her. She was having fun [dancing] but she’s very shy — though she doesn’t seem that way in the movie.

It was a process to get to know her and get her to open up, but she is very relatable. She’s really a teenager who goes through the same challenges teenagers do. She might not become a dancer. She may find another path. She wants to do what she likes. There is a key sequence where Sandra, Thalia’s mother, talks about accepting her daughter’s blindness. What can you say about including Sandra’s perspective?

One of the important aspects of the school are the moms, who are there every day supporting the kids. What happens in Brazil is that mothers give up their jobs to raise kids. So they are in the school and they wait the whole day. They do makeup and costumes for the performances. They are very important. There wouldn’t be a school without the moms.

I wanted to get to know one of the moms. Sandra is very honest. She is realistic, and that’s what I liked about her. Her relationship with Thalia is so beautiful; it’s like Fernanda and Geyza’s relationship. Thalia’s story is so complicated. It made sense to have a mother there.

I love Thalia’s comment that “change comes from them” in response to how prejudices towards disabled people are broken by those that hold the prejudices. It is, Thalia feels, more important for others to acknowledge her than for her to have to concede to others. What can you say about how “Looking at the Stars” addresses this point?

I heard from other girls in the company that people are almost afraid to approach them. [Able-bodied] folks don’t realize that people with disabilities are aware they are not getting attention in situations like [when they are] waiting to cross the street — where they hear people walking, but no one stops to help them. It’s that feeling [of being] ignored; that’s where a lot of the prejudice comes from. Disabled people are just like us and have the same challenges.

These dancers don’t have their sight. They still have to do the same things we all do. We followed another dancer, who talked to us about prejudices. Geyza didn’t because Geyza is so grateful for what she has. Thalia is upset, but she’s confident about who she is, and that’s how ballet helps her. She has this community and knows people are there for her and she can be herself. She’s a regular teenager. Can you talk about capturing moments of each dancer’s independence and insecurity?

One moment that surprised me — talking about insecurity — was when Geyza gets a serious boyfriend. She said she didn’t think he would like her. She feels she is lucky to have this guy in her life, and you would think it would be the other way around. She’s an independent woman, dancing, and earning a living. So why does she need to “serve” this guy? But that’s part of [women’s roles in] Brazilian society. She can take care of herself, but she is not sure she can take care of someone else.

On that same note, there is an image Geyza has of ballerinas being “perfect.” Yet your film shows that imperfection is fine, too. Can you talk about this idea of perfection?

I think that in a way, that’s what makes the performance fascinating. It’s not about disability; it’s about putting on a good performance. That’s the focus. I don’t want people applauding because they are blind. I want people applauding because they are good dancers. Talking about perfection is Geyza’s arc. In the beginning she’s perfect, and that’s what she wants to be. But by the end, it’s OK for her to dance and not be perfect, but to be happy. There’s this image of perfection she’s trying to achieve by dancing. But ultimately, it’s more about the feeling she has dancing.