Bowie, both insider and outsider, marked his 50th year with an album full of the electronic textures of the 1990s 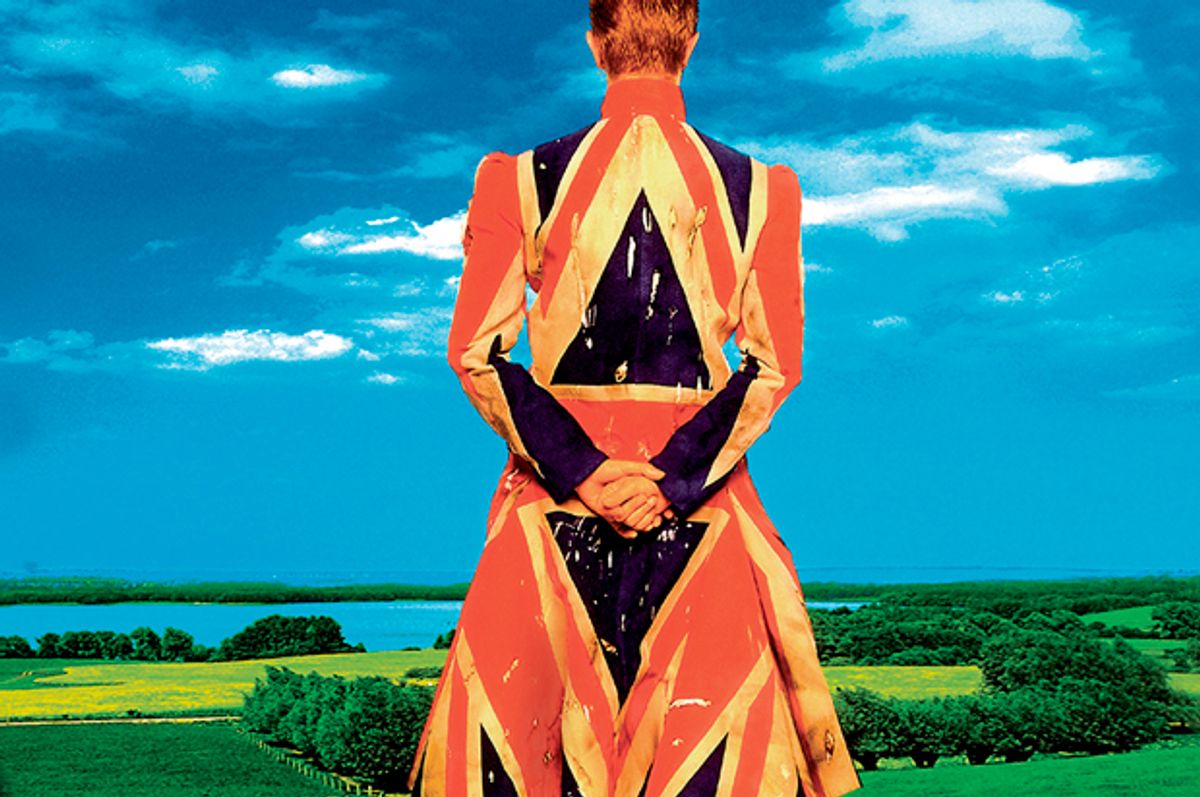 Context is everything when it comes to music fandom. Anyone who became a fan of the Rolling Stones circa the disco-fied hit "Miss You" likely views the band entirely differently than someone who first saw Mick Jagger and Company on "The Ed Sullivan Show." The same goes for Prince: Fans who fell in love with him during his "Purple Rain"-era MTV heyday have a far different take on his career than anyone whose first exposure came when he was known as a glyph.

Pointing out that context matters isn't meant to be a value judgment, of course. Purity tests used to determine when someone started liking a band or artist are pointless and divisive rather than unifying. When someone is first exposed to an artist at an odd stage of his or her career (a time of unorthodox sonic exploration, for example, or after the release of a dud album), however, it permanently colors perception in intriguing (and often unexpected) ways.

David Bowie music fandom is an especially interesting case study. During his days as a bleached-blond MTV icon, Bowie projected a rather mainstream persona. Seeing him tanned and dapper in the 1983 video for "Let's Dance" or striking a bar-band leader pose in 1984's "Blue Jean" video made his '70s otherworldly TV interviews and deliberately weird performances (such as on "Saturday Night Live") seem like a distant memory.

But by the '90s, when the misfits and freaks he once cavorted with suddenly became mainstream, Bowie became both an insider and an outsider. On the one hand, he was cooler than ever because a younger generation worshipped him. Nirvana covered "The Man Who Sold the World" on "MTV Unplugged." Bowie toured with Nine Inch Nails, a band riding high on 1994's "The Downward Spiral."And his 50th birthday bash, held in 1997, featured acts such as The Cure's Robert Smith, Smashing Pumpkins' Billy Corgan and Foo Fighters. Bowie was one of the alternative movement's patriarchs, the godfather of unorthodoxy.

At the same time, he was deeply engaged with modern music and his own current creative endeavors, which placed him in the odd situation of being both a living legend and a vibrant contemporary artist. Bowie had faced this problem in the 1980s as well, and turned to his fallback coping mechanism: dramatic reinvention. He formed the band Tin Machine and re-established his weirdo credentials by playing Jareth the Goblin King in "Labyrinth."

"Tin Machine was very important, 'cause it decontextualised me," Bowie told the Independent on Sunday in 1995. "After that, nobody had any idea what I was supposed to be. It enabled me to rebuild what I enjoyed doing the most."

And so Bowie in the '90s approached his legacy by modernizing it — and, in some cases, trying to one up it. That led to one of his most underrated studio albums, "Earthling," which turns 20 years old on Feb. 3. Co-produced by Bowie, Reeves Gabrels and Mark Plati, the bracing LP incorporates the serrated drum 'n' bass and electronic textures dominating music in the 1990s.

Two "Earthling" highlights, "Little Wonder" and "Battle for Britain (The Letter)," boast skittering drums that careen like a pinball machine, as well as industrial-flavored guitar aggression. The latter song also possesses sliced-and-diced, mad-genius piano. Distorted vocal effects and club-worthy programming — as on the stomping, dystopian Day-Glo highlight "Dead Man Walking" and the 8-bit-synthrock hellmouth "The Last Thing You Should Do" — further smear the lines between the organic and synthetic.

"I wanted to go whole-hog and do a real combination of hard rock and jungle, and I think that two or three times on the album, we come really close to it," Bowie told Pulse in 1997. "'Little Wonder' is a really good song and 'Battle for Britain' is a really extraordinary piece of music," he said.

"Then again, I tend to like and favor songs that at the time are not liked or even noticed, really," Bowie continued. "I stick with those and often I’m proved right in the end. None of my [favorites] were big singles or anthemic pieces, yet I knew those songs were good and lasting."

This reads like typical Bowie contrarianism or eclecticism, although the statement is acutely self-aware. At the time, the phenomenon of artists' incorporating then-fashionable electronic textures into their music felt suspiciously like trend hopping. Bowie, in contrast, observed that drum 'n' bass is "jazz-based," as he told The Baltimore Sun in 1997. "From its inception, it had such interesting breakbeats that any drummer worth his salt wanted to work out how on Earth he could get involved in it. I guess it's the nearest thing that we've had to a respectable version of [jazz] fusion."

When performing live, "you've got to realize that [the breakbeats are] the boss, and that you are there to support and enhance them, not the other way 'round," he added. "You're all the time finessing and honing back what you're doing. So you end up playing actually quite severely disciplined parts."

Accordingly, the frenetic rhythms and programming on "Earthling" reflect this methodical mindset and amplify the talents of then-band members such as drummer Zac Alford. In a Seattle Times interview, Bowie revealed, "We didn't just take parts from other people's records and sample them. On the snare drum stuff, Zac went away and did his own loops and worked out all kinds of strange timings and rhythms. Then we speeded those up to your regular 160 beats per minute."

Although the production and instrumental approach on "Earthling" admittedly sound slightly dated today, the record's songs feel more resonant than ever. During the '90s, Bowie's ongoing fascination with alienation morphed and expanded to take on political and personal significance. "Earthling" especially zeroes in on the experience of being an "other" — feeling like a stranger to religion, home and optimism and being suspicious of someone else's motives.

"If there’s anything that’s been a continuum in what I’ve written for 30 years, that’s it — that allegorical or metaphysical opting for a search for a spiritual life that’s fundamental to me as a person," he told Pulse. "It's the very simple question, 'Where am I with the cosmos?' They’re very easy questions, but very hard to answer. It has always created anxiety for me, so I vacillated and flitted, butterfly-like, from one religion to another."

In that sense, "Earthling" is on a continuum with the apocalyptic, conceptual bent of Bowie's entire '90s output. Curiously, his work from the 1990s has largely been overshadowed by the rest of his catalog, partly due to perception (the '90s rockers-going-electronic moments aren't exactly revered) and partly because he was quietly making some of the most inscrutable, challenging music of his life.

Atop that list is 1995's "1.Outside," a sprawling album co-produced by Brian Eno that's a gnarled, prog-electro concept record. Technology had finally caught up with Bowie's ambition, and he was able to harness new computer programs — such as an app that automated his infamous randomized lyric-writing process — to create the record's thematic anchors.

Bowie delighted, however, in the collision of the traditional and futuristic. Exhibit A: "The Hearts Filthy Lesson," a decaying electro-rock single from "1.Outside" sprinkled with shards of piano and repetitive rhythmic whirrs. And then there's 1993's "Black Tie White Noise," which also combines traditional genres (jazz, soul, R&B) with sharp-edged trip-hop, contemporary pop flourishes and (on the horn-peppered title track) an Al B Sure! cameo. "Black Tie White Noise" also presaged 1993's "The Buddha of Suburbia" soundtrack, an obscure collection heavily influenced by jazz and ambient music. In hindsight, it's easy to draw direct parallels between this era and 2016's "Blackstar."

The decade's outlier might be 1999's "hours. . . ," which was more subdued and meditative, despite the presence of aggressive tunes as the grinding, disoriented "What's Really Happening?" and the glammy "The Pretty Things Are Going to Hell." The record missed charting in the Top 40, which might explain somewhat why Bowie returned to more straightforward musical climes in the 2000s.

Much like U2, which also spent much of the '90s experimenting with all manners of electronic music, Bowie had the foresight to be fearless when opportunities presented themselves. Not everything was successful, sure — but there's still a lot more to excavate from Bowie's '90s catalog than perhaps meets the eye.