Trump wants to focus counterterrorism exclusively on Muslims. Is this a thank-you note to white supremacists? 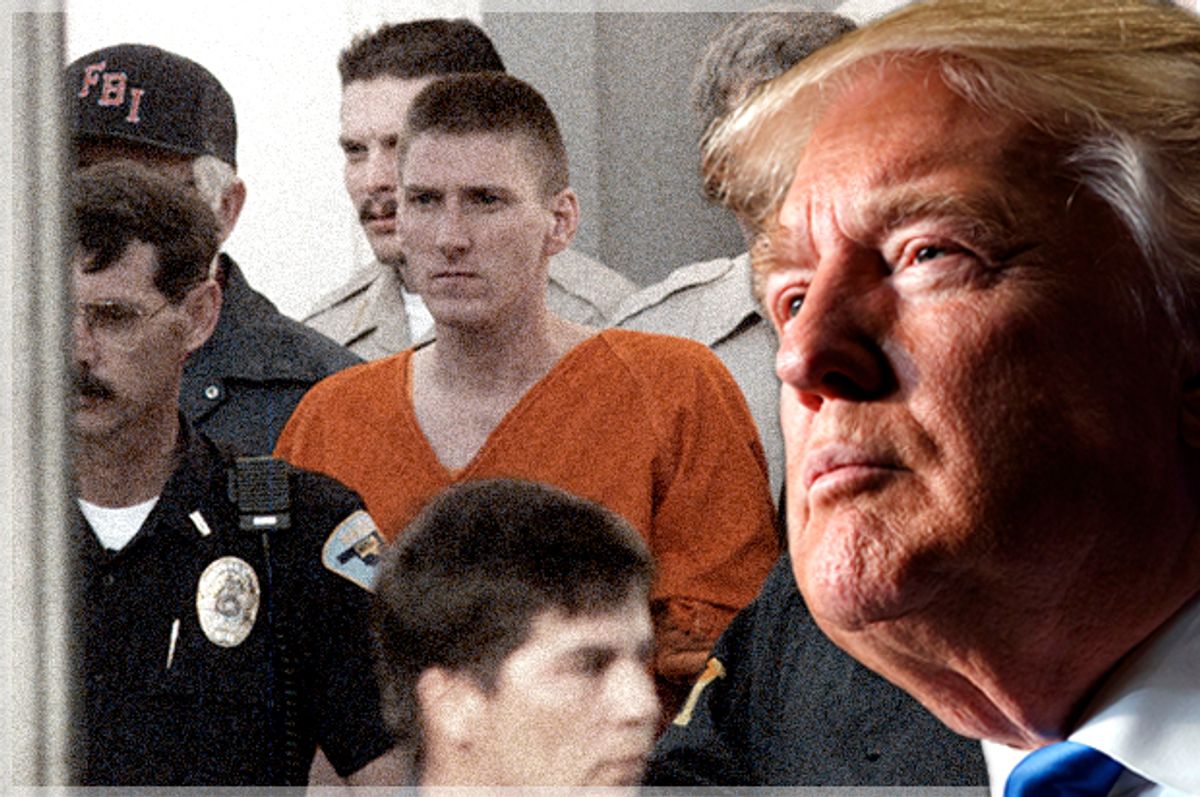 During the 2016 presidential campaign, Donald Trump promised to "take care of our African-American people." Given Trump's embrace of overtly or implicitly racist "law and order" policies, his history of racial discrimination against African-Americans and other people of color at his properties and his vigilante threats to commit a public lynching against the "Central Park Five," there was always an element of menace to that declaration.

The threat is now confirmed. On Wednesday, Reuters reported as follows (with italics added):

The Trump administration wants to revamp and rename a U.S. government program designed to counter all violent ideologies so that it focuses solely on Islamist extremism, five people briefed on the matter told Reuters. The program, "Countering Violent Extremism," or CVE, would be changed to "Countering Islamic Extremism" or "Countering Radical Islamic Extremism," the sources said, and would no longer target groups such as white supremacists who have also carried out bombings and shootings in the United States.

Steve Bannon and Stephen Miller are two of Donald Trump's closest advisers. They both admire and are affiliated with white nationalists and white supremacists. Is this policy change a quid pro quo directed at the overt racists and neo-Nazis who supported Trump with enthusiasm? The American public will likely never know the answer. Nevertheless, the implications should be frightening: When the federal government declines to use its counterterrorism resources to combat violent white supremacy, it amounts to the same thing.

This decision by the Trump administration is part of a bigger pattern in which (white) Republicans and conservatives — and their media offshoots — systematically try to suppress information and investigations about the threat posed by right-wing militias and hate groups.

I explored this subject in an earlier article for Salon, following the arrest of three white men in Kansas who called themselves the Crusaders:

On these matters, white privilege also imperils public safety. Since 2002 more Americans have been killed by white Christian right-wing terrorists than by Muslims or Arabs. As reported by Duke University’s Triangle Center on Terrorism and Homeland Security in 2015, “Law enforcement agencies in the United States consider anti-government violent extremists, not radicalized Muslims, to be the most severe threat of political violence that they face.” In its announcement about the arrest . . . the FBI also referred to the Crusaders as “domestic terrorists.”

But the right-wing media and the Republican Party have chosen to actively suppress that information — as was the case with West Point’s Combatting Terrorism Center’s findings about the threat posed by right-wing anti-government groups, which were met with protests, derision and threats to cut research funding. In all, the image of the Muslim-Arab bogeyman with a suicide vest hiding under the beds of white middle America does more political work for conservatives than a mature discussion of the significant dangers posed by white right-wing radicals and terrorists in the “sovereign citizens” and militia movements.

Trump's decision to ignore the dangers posed by white supremacists comes at a perilous moment. As compiled by the Southern Poverty Law Center and other groups, since the November election there have been at least 900 documented hate crimes, an almost unprecedented increase. The FBI recently released information suggesting that white supremacist groups are actively trying to infiltrate police and other law enforcement agencies with the goal of targeting nonwhites for harassment and violence. The so-called Sovereign Citizens movement — whose members identify with white nationalism and white supremacy — also represents a major threat to public safety and order.

These are life and death matters. Last week, a white nationalist Trump supporter was arrested after allegedly killing six Muslims at a mosque in Quebec. In 2015, Dylann Roof — who was radicalized online by white supremacists — murdered nine African-Americans during a prayer session at their church in Charleston, South Carolina. These examples do not include the many other domestic terrorism plots by white supremacists and other right-wing groups that have been prevented by law enforcement.

The Trump administration's decision to shift resources away from investigating white supremacist hate groups and focus exclusively on "radical Islam" leaves America less safe and less secure. As president of the United States, Trump is the nation's chief law enforcement officer. He is supposed to ensure that the Constitution's promise of "equal protection under the law" is properly fulfilled.

For Trump, those obligations do not appear to apply to African-Americans, Arab or Muslim immigrants and other people of color. As he suggested he would do all along, Trump is targeting Muslims and African-Americans. Now he appears to be rewarding his white supremacist supporters by extending them special protection.