Swept up by the militarized monitors of social media, our hero finds himself in a writers' gulag 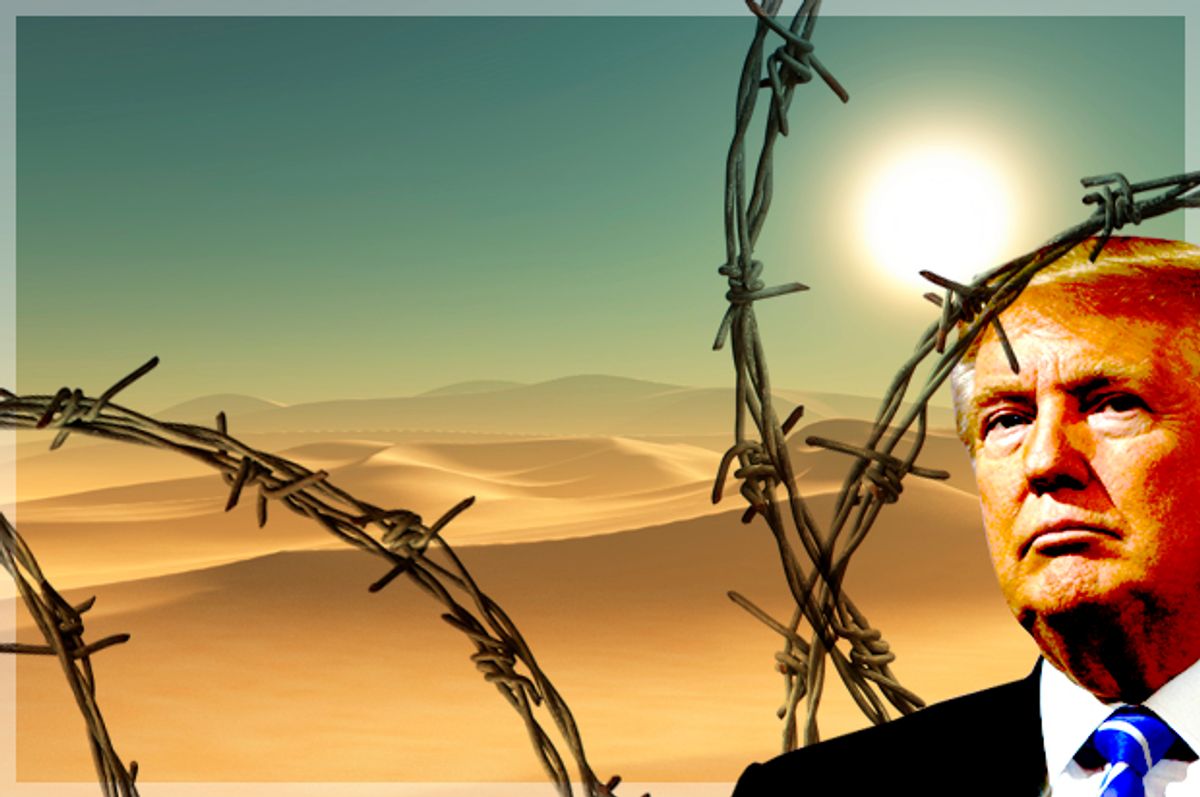 The old van lumbered, grim and relentless, across some blasted rural red state prairie road. The landscape was scrub grass, oil stains and the occasional mashed-up skunk or possum that had emerged from the brush at the wrong moment. Next to me, a young woman wearing a hand-knitted pink pussycat ski cap pecked at her phone, desperately seeking a signal.

“I don’t know what happened,” she said. “I published a piece for a fashion blog making fun of Ivanka’s state dinner dress, and eight hours later there was a knock on my door.”

One by one, the writers had been disappearing. At first, while worrisome, it was also exhilarating because that meant more bylines for the rest of us. But gradually, it began to dawn that no one would escape the sweeps. One day I retweeted something that said, “Steve Bannon looks like an old pumpkin that got drunk as fuck,” and just like that, my glorious career was over.

The van turned right, drove through a flimsy gate and pulled up to a series of bland concrete buildings, arranged in a quad around a recreation area that contained a basketball court and, surprisingly, a hot tub. Later I learned that tub was for the travel writers, who demanded a free vacation no matter the circumstances.

They dumped us out unceremoniously. I walked into an office. A bored-looking functionary, who was not happy to have this posting, droned, reading a form without looking at me.

“I retweeted something mean about Steve Bannon.”

“When will you people learn?” she said.

She stamped a form.

“What does that mean?” I asked.

“You’re being assigned to Bunkhouse 7,” she said. “It’s gender nonspecific. That’s what you idiots want.”

I took my roller bag over to the bunkhouse. There were my mates, including a former writer for Rolling Stone, five novelists, six poets, a couple of bloggers and Elliott Rosenblow. A former Justice Department official, Elliott had been on CNN for a while, but when he started posting articles like “Seven Ways to Definitely Know You’re Being Doxxed by an Autocrat,” it was over for him. He vanished in the first wave. I had met him once at a book party.

The poets were sitting around a hot plate, trying to re-create Hillary Clinton’s risotto recipe from memory.

“It’s a pain,” one of them said. “We can’t get any arborio rice out here. It’s white rice only, and it just turns to mush.”

“I brought some Reggiano in my backpack,” said another. “So at least it tastes a little like home.”

Over on a bunk sulked a sad-looking millennial, ski cap pulled down nearly to his eyes. He wore a sign around his neck. The sign read, “I WILL NOT BE SILENCED.”

“I have no idea,” Elliott said. “He hasn’t spoken a word since he got here.”

“Mail call!” I heard a voice chirp from the doorway. I looked over.

No one seemed eager to talk to him.

“You’re a collaborationist,” said a novelist who was also a podcaster. I later learned she’d been sent out for an episode titled “Science Is Real.”

“Just because I do odd jobs for the staff in exchange for a private apartment and meals doesn’t make me a collaborationist,” Safran Foer said, raising a fist. “Solidarity, my brothers and sisters. Resist!”

“You won’t say that when I tell you your New Yorker subscription is here,” he said, throwing a slender magazine on the floor.

The writers, never able to resist The New Yorker, scrambled toward the magazine as if it were a piece of cheese.

“I have a story in this issue,” Safran Foer said.

What a suck-up, I thought.

After he skipped away, I asked, “Is that the only reading material you’re allowed here?”

“Nah,” said a novelist who also reviewed novels written by his friends who worked at BuzzFeed. “We’re allowed to read books, but only if we’ll buy them from Amazon. So we’re boycotting.”

“We support independent bookstores,” said another. “Also, no books published by Simon & Schuster.”

A young woman burst through the door, looking confident and unruffled. It was Lauren Duca, the Teen Vogue writer and leader of the resistance.

“I’m back from the cooler,” she said. “They’re never going to gaslight me.”

The writers gathered around her, telling her she looked beautiful and that she had totally owned Tucker Carlson that one time on TV. Then she noticed my presence.

“Girl, I was writing before you were born,” I said, showing her my hands.

“I hope those hands know how to dig,” she said. “Because we’re tunneling out of this dump.”

I looked out the dusty window, wondering where it all had gone. Two nights ago, I’d slept in my own bed, with an electric fire going in the hearth, and the next morning I had woken up to a fine Arabica roast. Now I was here, with only David Remnick’s weekly President Obama profile to read. In the distance, I could hear the grackles.

They were saying something.

But they did not speak to me.