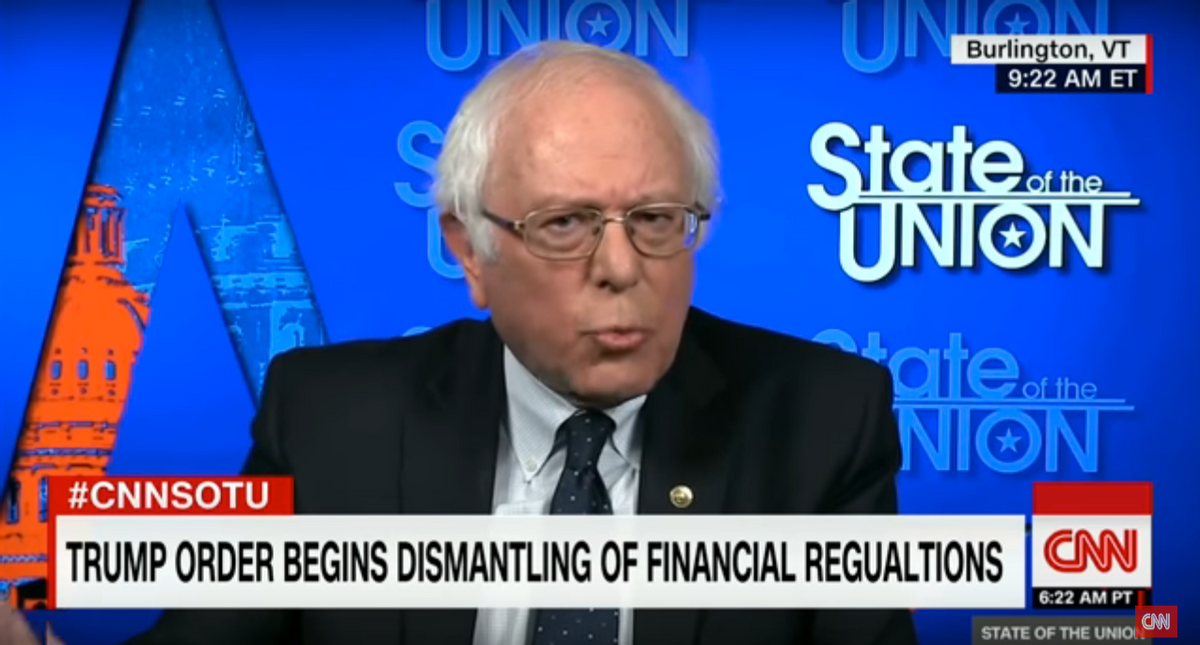 If President Donald Trump had won the election by running a campaign that touted Wall Street and slighted the welfare state, then Sen. Bernie Sanders would have no problem with the results. "That's fine, that's democracy," he said in an interview Sunday on CNN.

"But you have a president who, I think in a totally fraudulent campaign, said that I am going to stand up for the working people. Look at his Cabinet: We have never had more billionaires in a Cabinet in the history of this country," Sanders said.

The former Democratic presidential candidate ran on a platform that in many ways resembled the populist, anti-establishment campaign of President Trump. Two weeks into the new administration, Sanders is convinced that Trump was lying all along.

"I have to say this, Jake, and I don't mean to be disrespectful, but this guy's a fraud," Sanders said to CNN's "State of the Union" host Jake Tapper. "This guy ran for president of the United States, saying, 'I, Donald Trump, am going to take on Wall Street. These guys are getting away with murder.' Then suddenly, he appoints all these billionaires. His major financial adviser comes from Goldman Sachs. And now he is about to dismantle legislation that protects consumers."

For Sanders, Trump's assault on the Dodd-Frank financial regulations is just the beginning. The progressive believes that Trump's Cabinet choices signal that he intends to eliminate the welfare state.

After the primaries, when Sanders suffered a defeat to Hillary Clinton, there were concerns that Sanders loyalists would not remain loyal to the Democratic Party. Results from the election in November suggested many Sanders supporters turned to third-party candidates. Some even voted for Trump.

On Sunday Sanders had a message for these Americans:

"I hope that all those folks who voted for Mr. Trump because they thought he would stand up for working people — man, this guy is a good showman. I will give you that — he is a good TV guy — but I think he is going to sell out the middle class and the working class of this country."