Trump is gaslighting us — again! — with his silly terrorist attacks list, but journalists can fight back

Donald Trump and Kellyanne Conway made up attacks that didn't happen; now they want to change the subject 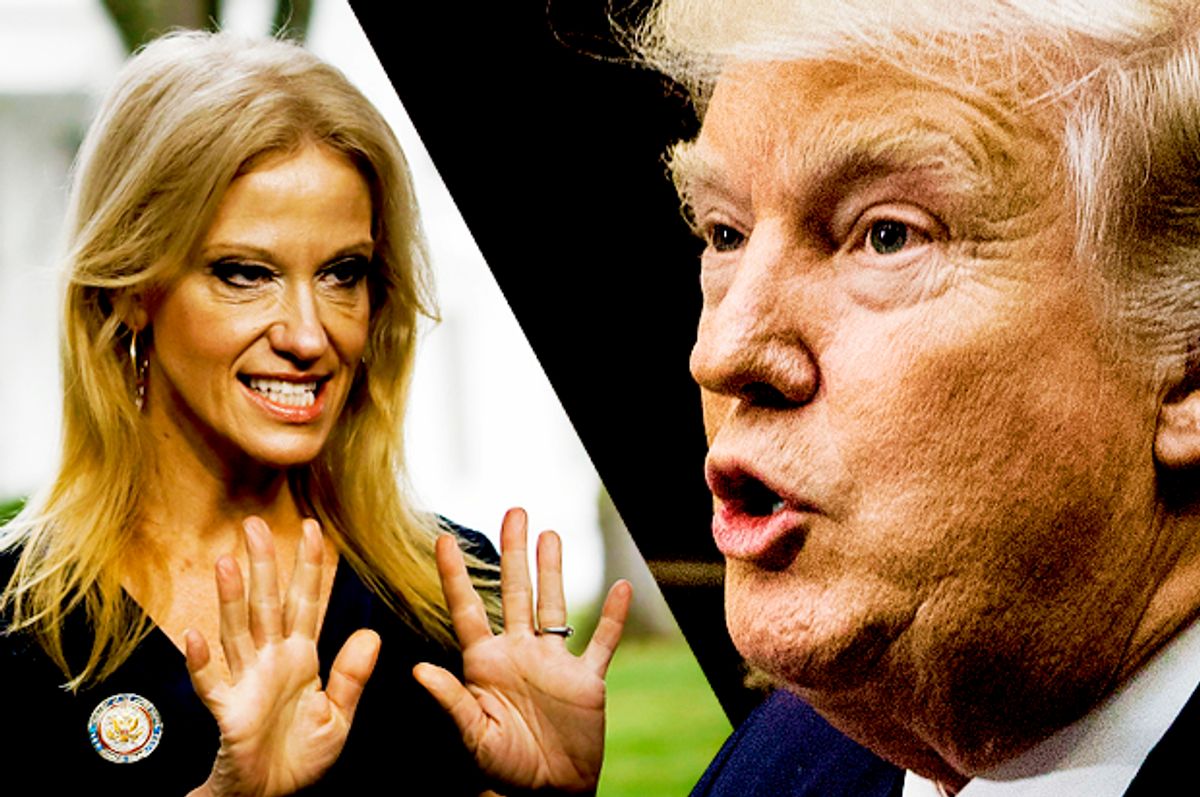 Most people who have been in abusive relationships have endured the "gaslighting" experience, which is when abusers try to distort victims' perception of reality.

Here's how it typically goes: The victim confronts the abuser about his abuse, whether it's physical or emotional. Rather than accept responsibility for his behavior, the abuser then tries to turn the tables on the victim by making false accusations. (The term is derived from the 1944 film "Gaslight," in which Ingrid Bergman is a woman slowly being driven insane by her husband.)

Typically, the abuser will accuse the victim of being "crazy" or "paranoid." These qualities have the advantage of being slippery and ill-defined; they can be used literally or as metaphors. To make things worse, the abuser often reserves the sole right to define what constitutes "crazy," making it almost impossible for the victim to defend herself.

It's enough to drive one crazy. It's also exactly what Donald Trump is doing to the media, with his fake-news debate over whether terrorist attacks are somehow underreported.

This latest round of Trumpian gaslighting started with a concrete, specific accusation being made about the Trump administration — that it's grossly exaggerating the threat of terrorism and sometimes lying about it, in order to drum up support for the Muslim travel ban.

This accusation is solid and specific, based on extensive evidence that exists on tape.

Last week White House adviser Kellyanne Conway, told MSNBC's Chris Matthews that something called the "Bowling Green massacre" happened. It did not. When she attempted to claim she misspoke, two other interviews surfaced — one with Cosmopolitan and one with TMZ — making clear that she had used the term "Bowling Green massacre" on multiple occasions and that this was something more than a momentary lapse.

Then Trump himself told a massive whopper, telling a Monday press conference that terrorism was occurring "all over Europe" and had "gotten to a point where it’s not even being reported." He added: "And in many cases the very, very dishonest press doesn’t want to report it. They have their reasons, and you understand that.”

Trump's accusation was perfectly clear and indisputably false. He claimed that terrorist attacks happen frequently and that journalists had deliberately refused to report on them, for unspecified but sinister "reasons." As was the case with the "Bowling Green massacre," this was an example of Trump and his team inventing terrorist attacks that never actually happened, in order to scare people.

As Aaron Blake of The Washington Post reported, "Trump doesn't appear to have totally invented this theory on the fly." Instead, the conspiracy-theory website Infowars, which Trump has praised in the past, has been running false stories about media cover-ups of terrorism for months now.

But when confronted with the accusation that Trump's team is falsifying stories about terrorist attacks, White House press secretary Sean Spicer went straight to gaslighting the press.

The president, Spicer said on Monday, "felt that members of media don’t always cover some of those events to the extent that other events might get covered — like a protest gets blown out of the water, and yet an attack or a foiled attack doesn’t necessarily get the same coverage.”

It was the equivalent of watching an abuser, when confronted with evidence of the specific harm he has caused, changing the subject: The real problem, see, is that his wife is paranoid and crazy.

This gaslighting campaign went to the next level when the Trump administration released a list of 78 attacks it claimed "did not receive adequate attention from Western media sources," even though many of them — the Paris attacks and the San Bernardino, California, shootings, in December 2015; the Orlando nightclub shootings of June, and the Nice, France, truck attack in July — received wall-to-wall coverage for days on end from every cable news channel.

This is classic gaslighting. Accusing the media of inadequate coverage of terrorism is like accusing a woman of being "crazy." The target has no means of defense. Just like determining what counts as "crazy" is hard to pin down, what constitutes "adequate attention" to a terrorist attack is unclear. The Trump administration has apparently assigned itself to be the sole arbiter; its citing the coverage of the Paris and San Bernardino attacks demonstrates that no possible amount of reporting will ever be enough.

By shifting the discussion to an unresolvable debate over what constitutes enough terrorism coverage, the Trump administration has shifted focus away from a concrete problem, which is that both the president of the United States and one of his principal advisers have talked wildly about terrorist attacks that never happened.

In response, many journalists attempted to defend themselves, playground-style, by demonstrating that they did so cover terrorist attacks. Anderson Cooper ran a reel of his coverage. The BBC went down the list to prove it had covered every single one of those stories, even though some of the items were vague, which may have been a purposeful move by the Trump administration to induce second-guessing and doubt.

When it comes to interpersonal relationships, however, the best advice is to let go of the desire to prove yourself to the gaslighter. Psychoanalyst Robin Stern, author of "The Gaslight Effect: How to Spot and Survive the Hidden Manipulation Others Use to Control Your Life," explained this to Oprah magazine:

To break the pattern, Stern suggests, take small steps in standing up for yourself by not engaging in silly arguments. "If he accuses you of something you know is ridiculous — being 20 minutes late when it's really only three minutes, for example — not saying anything is sometimes the best response." Another option: "Oh . . . my watch says three minutes . . . but it's so great to see you!" Or "It doesn't make sense to argue about our watches — let's order and enjoy our time together." But if the "gaslighter" continues to browbeat you for being late, you may have to walk away from the table to protect yourself.

Similarly, journalists should be wary about engaging in unwinnable arguments over how false the false accusations leveled against them really are. Instead, treat the false accusations as self-evidently bizarre, and steer the conversation back to the real issue from which the administration is trying to deflect attention. In this case, it's time to demand answers about why major figures in this administration keep on saying things that aren't true.