It's a win: He appeased the GOP base by attacking a woman, and the odious Jeff Sessions is now our attorney general 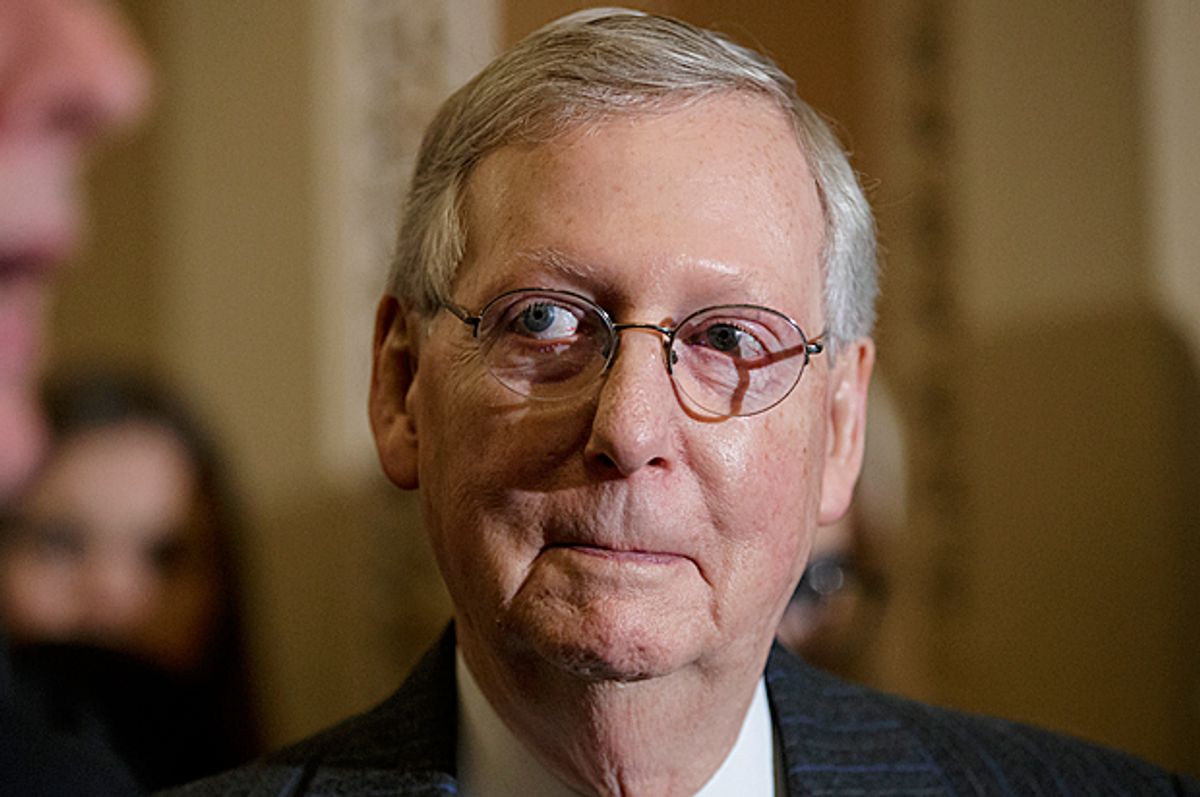 On Tuesday night Mitch McConnell stood up in the Senate and within the space of a minute or so managed to enrage Democrats, women, civil rights activists, the ghost of Elizabeth Cady Stanton, you name it. By invoking the rarely used Rule 19 of the Senate to stop Sen. Elizabeth Warren from reading into the official record a letter penned by the late Coretta Scott King in 1986, in opposition to a judicial nomination of Jeff Sessions, McConnell created an immediate firestorm and gave the left a new martyr.

The general consensus of writers and political observers was that the normally careful McConnell had made a rare misstep. Not only did he silence a popular liberal firebrand, but in a way he also silenced the widow of civil rights hero Martin Luther King Jr. With Warren facing surprisingly low approval ratings in Massachusetts, he may have just given her 2018 re-election and a possible presidential run in 2020 a high-profile boost. He may have even coined a slogan for both campaigns: “She was warned. She was given an explanation. Nevertheless, she persisted.”

Another reason McConnell’s move seemingly made no sense was that it immediately ensured that everyone on the planet would want to hear the King letter, which Warren was happy to read outside the Senate chamber for a video on Facebook Live that, as of this writing 24 hours later, has received 9.5 million views. Had McConnell not intervened, the reading of the letter would have remained an unnoticed moment in 30 hours of floor debate over Sessions’ nomination, which would have then been voted through without a fuss.

Instead, the majority leader reinvigorated the opposition to Sessions and to the GOP Senate majority. Even hard-core Democrat-hating conservative Ben Shapiro, the former Breitbart lackwit whose antipathy toward Donald Trump in no way mitigates the fact that he is still a terrible human being, could not quite believe McConnell was scared enough of Warren to justify shutting her down.

And while there are good arguments to be made that McConnell had a rare moment of panic, or that this was one more example of Republicans going all in on their well-earned reputation for being a party motivated almost entirely by racism, I think much of the reaction missed one simple motive: McConnell was throwing red meat to his base by going after a high-profile liberal whom Republicans hate. By doing so, he was trying to counter any blame directed at him for the near failure of the push for Betsy DeVos' confirmation as education secretary and maybe for the general perception that he looks weak in letting Democrats slow down the approval process for other nominees, much to the public anger of the president and his most rabid defenders.

The fact of the matter is that even if the majority leader stumbled into this ploy, the base of the Republican Party loved seeing McConnell shut down Warren. High-profile members were not shy about sounding like misogynistic jerks about it, as befits a party that has turned into the pure id of every straight white male. Even Lindsey Graham, one of the few Republican senators who occasionally seems to believe in sticking to the old norms of the chamber, applauded the move.

Amid the partisan shrieking of social media and website-comment sections where so much of our political discussion is conducted, this moment will briefly galvanize the left. Warren and the Democratic Party will likely do some solid fundraising off it. The senator from Massachusetts, who recently saw her stock slide by voting to send Ben Carson’s nomination as HUD secretary to the full Senate, probably grabbed back some credibility.

But it’s a stretch to say, as some have, that McConnell was trying to elevate a weak candidate in some senatorial version of 11-dimension chess. The majority leader saw an opportunity to give his base something to cheer about and a chance to compel Democrats to spend the Sessions debate talking about Warren's silencing, instead of the terrible civil rights record of the man whose nomination they were supposedly debating. The moment might feel like a momentary victory to Warren and her partisans, but in the long run that's giving the whole dustup too much credit. Jeff Sessions is now attorney general, and the Trump confirmation machine rolls on.