You are what — and where — you eat: From the Lanford Inn seafood buffet to those "Crazy Ex-Girlfriend" organic strawberry donuts 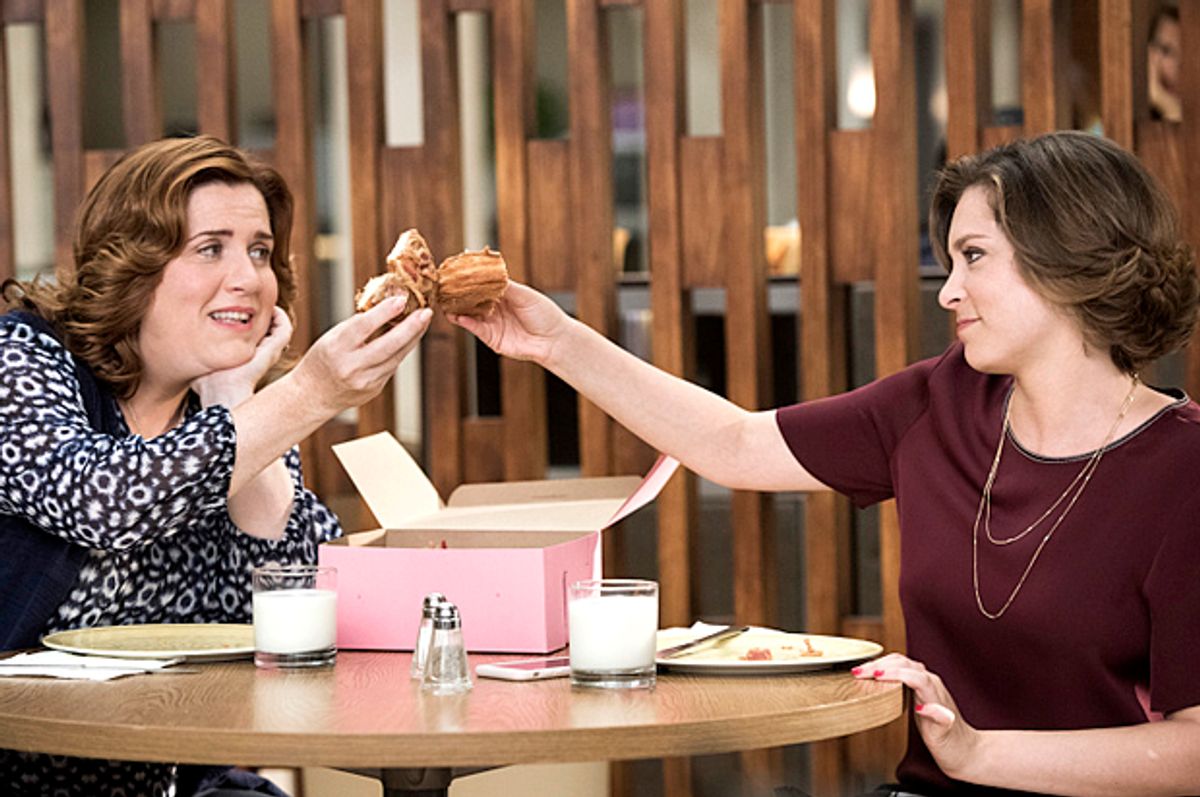 Around 100 A.D., the Roman satirist Juvenal coined the phrase “bread and circuses” to describe how the government elite won the affections of the common people: by distributing cheap grain and putting on overblown chariot races. In modern parlance, the masses were appeased by fast food and faster entertainment.

For the longest time, we could put both food and entertainment into these tidy boxes with well-defined boundaries. High and low culture. Fine dining and fast food. Art films and laugh-tracked sitcoms. Chain-bought burgers wrapped in grease-soaked paper would have fit in Juvenal’s bread box. Anything on a primetime cable slot qualified as circus.

But -- as a recent Nobel Prize winner once said -- the times, they are a-changin’.

In the advent of serialized television that presents itself more like film -- with shows like “Fargo,” “True Detective” and “The Leftovers” -- and cartoons that are both incredibly puerile and socio-politically astute ( here’s looking at you,“South Park”), conceptions of high and low have been  jumbled.

The same can be said for food.

Wes Avila is a Le Cordon Bleu graduate who spent time staging for Alain Ducasse. Now he is the owner of Guerrilla Tacos, a food truck based in L.A. In a 2016 Lucky Peach interview, Avila  said that if he unwrapped his tacos and presented the fillings on an actual plate -- instead of passing them through the window of a truck -- he could charge $20 more per customer. His menu includes items like clam ceviche, wild boar picadillo, furikake, Persian cucumbers, and micro-herbs. All for around $6 a taco.

It’s white tablecloth quality rolled up in a tortilla and rolled around on wheels, and it’s emblematic of a shift in how both chefs and consumers view “fine dining.” Like our entertainment, it’s evolving into something experimental and quality-driven. In turn, questions of taste (which, to scholars like Juvenal, once seemed so cut and dried) have been further complicated.

But as the scope of what constitutes gourmet becomes more nuanced -- and as boundaries continue to erode between pop and fine culture -- it’s worth considering how TV sitcoms have historically portrayed fine dining, what it meant, and how it’s changing on television today.

In a 2015 Eater story “How Scripted Television Is Artfully Focusing its Lens on Food,” Joshua David Stein writes that TV settings like delis and coffee shops have traditionally served as blank backgrounds for the real drama of an episode; only in recent years have television directors finally taken advantage of food choice and preparation as a commentary on character, and restaurants as an obvious location to truly build out scenes.

On the other hand, looking back at the portrayal of fine dining on scripted TV over the last two or three decades, it’s a veritable buffet of purpose. Sometimes it’s the setting for an important announcement -- an engagement, pregnancy, or divorce. (“Everyone breaks up at Pomodoro,” said Jerry on "Seinfeld.")

More often, it’s where writers launch into a caricatured plot point overflowing with a predictable cast of characters: the snobbish maître d', the avant-garde chef, the haughty sommelier. There are customers too. The persnickety critic, the poor guy who forgot his wallet, the “I just want a steak and potatoes (regardless of what’s on the menu)” diner.

Why the need for the exaggerated tropes? That depends on the characters acting opposite them.

While fine dining has historically been viewed as inaccessible — and indeed is, both culturally and economically, to many — TV shows, especially network sitcoms, are designed to appeal to the masses. One key example from the late ’80s and early ’90s is Roseanne Barr’s groundbreaking working class family sitcom “Roseanne.”

Early in the series, Roseanne Connor and her husband Dan (John Goodman) head out to dinner at the Lanford Inn. Despite the fact that the restaurant, to our eyes now, looks like a hopeless sea shack -- plastic lobsters hanging from the ceiling, tiki cocktails galore -- it was meant to be the swankiest place in town. It’s fancy enough that Dan was required to shave and slap on a tie, and expensive enough that the couple could only afford it by using a two-for-one coupon to raid the buffet, which was displayed in an oversized boat -- oars included.

Roseanne sums up the experience in one line: “It's nice going to a restaurant that don't have a drive-thru.” It’s not a major revelation in the scope of the episode, but rather a succinct reminder of the financial realities of the working class that underpinned the series until it finally concluded in 1997.

On the other end of the spectrum, we have characters like Hester Fields from the 1980s British sitcom “Fresh Fields.” She’s an empty-nester with a knack for French cooking, so she begins working as a fill-in chef one night a week at a local restaurant. Plot points in the episodes center around preparing for a critic’s visit, waiting anxiously for her aspic to set, and agreeing to make her husband shepherd’s pie after he has grown tired of dinner after dinner of boeuf en croûte au foie gras.

Though it’s set up as a sitcom, “Fresh Fields” -- like “Frasier” in the U.S., which is one of my personal favorites -- doesn’t always seem meant for the masses. Both shows delight in their innate snobbishness involving food, wine and coffee. However, they are not without grounding characters.

In the season one episode “Dinner at Eight,” Frasier Crane (Kelsey Grammer) and his brother Niles (David Hyde Pierce) offer to take their dad, ex-cop Marty (John Mahoney), out on the town. The brothers envision a night at Seattle’s hottest new restaurant, Le Cigare Volant. It’s not exactly Marty’s idea of a fun time, but he agrees to go along. And after the group finds out their reservation has been lost — and because it’s a fine dining restaurant on TV, the staff won’t accommodate them — Marty comes up with an alternative plan: The Timber Mill.

The Timber Mill couldn’t be more different: It’s a very rustic steak joint where waiters roll through the restaurant with the “meat trolley.” Where Dan Conner had to throw on a tie to get into the Lanford Inn, Frasier and Niles’ ties are cut off by The Timber Mill staff. It’s a very obvious culture clash that results in some bad attitudes from the brothers, leading to an impactful speech from Martin about the difference between being refined and being a snob. Everyone can relate; and in this instance we realize that sometimes lampooning the Frasier Cranes of the world, with their predilection for French food and vintage reds, feels good.

These opposing high-low relationships to fine dining are especially digestible in the compact sitcom format. In many respects, these settings serve a similar purpose -- they are tied intrinsically to characters’ understanding of their own social status, and offer gentle commentary on it.

But as the New York Times’ critic at large Wesley Morris wrote in his 2016 article “TV’s Dwindling Middle Class,” television is still “a medium struggling to understand ‘average,’ ‘ordinary,’ ‘normal,” leading us to the question: “What does the ‘average’ relationship to fine food look like today?”

Returning to Joshua Stein’s Eater article, he writes that the appetite for food on television has grown exponentially in recent years, and  “as much as it pains me to say, today's golden age only exists thanks to the vast popularity of smaller-minded shows — like 'Top Chef' and 'Iron Chef' — that came before them.” In 2015, more than 400,000 people on average watched Food Network at some point during the day.

Thanks to those shows, many of today’s “average” viewers are also amateur foodies who understand that there’s a world between white tablecloth and a fast-food sack -- perhaps gourmet tacos? This development comes with societal complications of its own, but I’d argue that today’s masses have an understanding of the food and culture landscape that is far less stratified than scripted television previously made it seem; and one far more complex than Juvenal would likely give them credit for.

Perhaps one of the shows that best makes this point currently is The CW’s “Crazy Ex-Girlfriend.” In and of itself, the series is a genre-bender -- a sitcom with extravagant, campy musical numbers as well as refreshingly real depictions of mental health, sexuality and love.

It also offers a variety of high and low (and everything in between) dining options scattered throughout each episode: artisan donuts; sports bar grub; Panda Express; upscale tacos; a fondue restaurant that delivers and will melt the cheese right at your kitchen table, providing diners with disposable fondue skewer forks before disappearing discreetly into the night.

Some of the foods are presented as part of a normal day’s experience, eaten as casually as George Costanza chowing down on a basic hamburger at Monk’s. Others -- like main character Rebecca Bunch’s (Rachel Bloom) favorite fresh, gourmet strawberry donuts -- are eaten with near orgasmic delight.

As one of those “average” TV viewers with an appetite for good food on- and off-screen, the show’s depiction of food feels very real. For that reason, even the fine dining scenes resonate. There’s a particularly heartwarming example found toward the end of the first season, during the episode “Josh Is Going to Hawaii.”

In it, Darryl Whitefeather (Pete Gardner) -- Rebecca’s endearingly awkward, mustachioed attorney boss -- has come to terms with the fact that he is bisexual. So he decides to ask the man who elicited these feelings, Josh Wilson (better known in the series as White Josh, played by David Hull), out on a real date.

The camera zooms in on their booth. Darryl, dressed in a sharp charcoal blazer, demurely sips from his spoon, while Josh struggles to kep the sleeve of his borrowed jacket from dipping into his tomato soup.

“This place is nice,” Josh says. “I’ve never been to a place where they give you your own jacket.”

At this point, we sort of sense that the writers are in on the joke. They’ve taken a dated trope -- the clichéd underdressed date -- and modernized it. Then they push it a step forward. Darryl tells Josh he wants him to meet his coworkers; Josh kindly replies that maybe Darryl needs to relax just a little bit.

Josh says: “This is kind of our first date, and this is the restaurant where my parents came for their silver wedding anniversary.”

It’s funny in a devastating, takes-all-the-air-out-of-you sort of way. We watch them navigate the rest of the meal. Darryl, who is almost old enough to be Josh’s father, drains his white wine in one gulp. Josh, dressed in board shorts and flip-flops, looks supremely out of place.

“Crazy Ex-Girlfriend” used the setting itself to heighten the tension. No gimmicks, no stereotyped secondary restaurant guests. The writers realized that their audience probably knows how these places feel, and trusts them to connect the emotional dots.

Ultimately, though, Josh encourages Darryl to try dating apps and to see other people -- they aren’t meant to be a couple. Perhaps some things don’t change. Everyone breaks up at Pomodoro, after all.