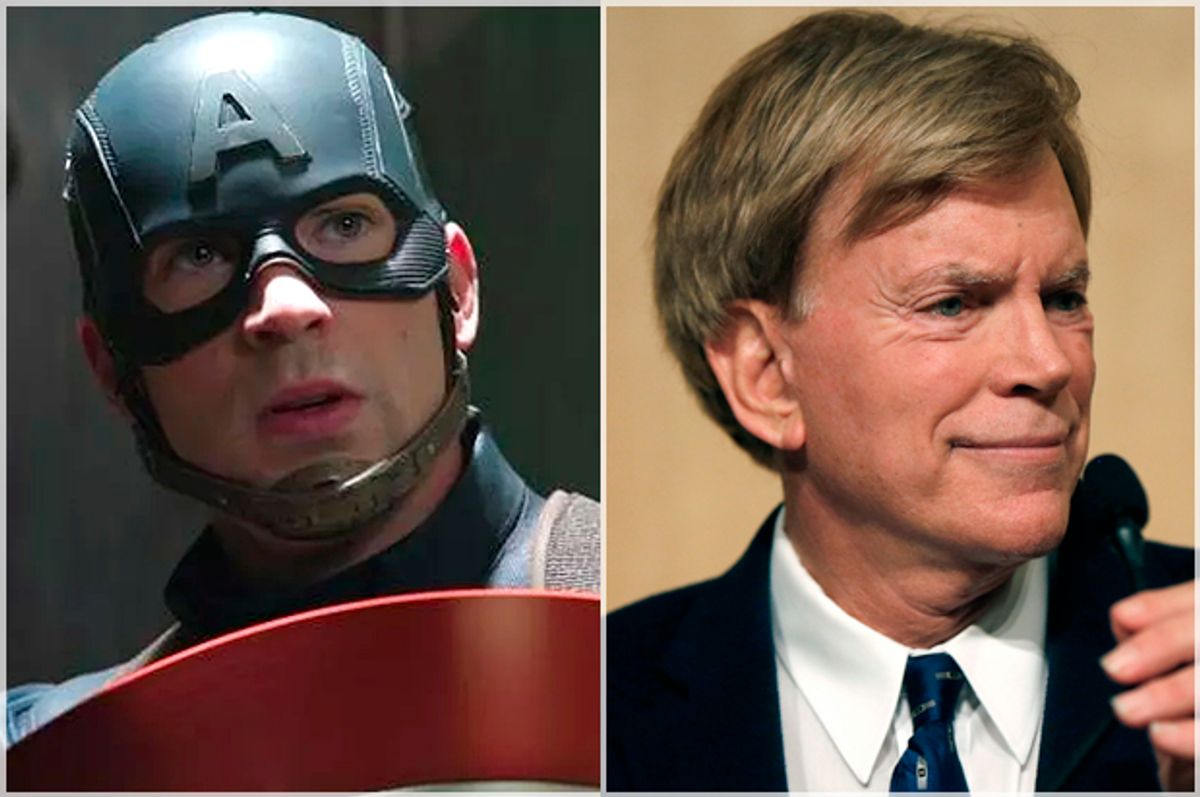 A recent Twitter exchange between former Ku Klux Klan leader David Duke and current Captain America Chris Evans raises some important points about separate, but not entirely unrelated, issues involving prejudice and celebrity culture. These are thorny subjects that America has been grappling with for years, and will almost certainly continue to confront in the future, so it is absolutely necessary that we learn from them.

If David Duke . . . . DAVID!...DUKE! . . . thinks you're right, then you are unequivocally wrong. The confirmation of @jeffsessions is beyond words. https://t.co/CuLUznwO6S

Typical dumb actor - if everything I say is wrong, then when I say I oppose these Zionists wars, you must be for them, Captain America!? https://t.co/fsxQHgzdWD

@DrDavidDuke well if these nuggets of bigotry are some of your OTHER thoughts, then I stand by my original tweet https://t.co/YSrOCDuyBw

Lesson 1: Always be on the look out for the sneakier ways that bigots try to convert us.

At first I was a little puzzled by the wording of Evans’ reply. When Duke wrote about “Zionists wars,” he was invoking an anti-Semitic conspiracy theory that posits that foreign policy in America and other Western countries is unduly influenced by Jews.

Evans’ tweet responded by ignoring the slur and deflecting to Duke’s “other thoughts,” which could have been viewed as an implicit agreement with them. Then I saw that the list of Duke quotes that Evans attacked with his citation included many that were anti-Semitic, suggesting that Evans had either chosen to ignore Duke’s use of bigoted code language or simply didn’t pick up on it.

Lesson 2: Sometimes pop culture winds up reinforcing narratives that, though their creators may not be fully aware of them, have dangerous real-world assumptions.

There is an uncomfortable irony in the fact that the character of Captain America was last seen in the movie “Captain America: Civil War,” whose main plot involved him opposing international organizations that oversee the powerful and hold them accountable (which I discussed last year in more detail).

Yet here we are, with the actor who played Captain America speaking out against a president whose foreign policy is governed by a logic very similar to the one promoted by that character (and in the year that Trump was elected president, no less). The opposition to internationalism isn’t even particularly American anymore, at least insofar as our modern history.

Trump’s ideology when it comes to organizations like the U.N. and NATO or free trade agreements like the North American Free Trade Agreement and the Trans-Pacific Partnership will  reverse internationalist beliefs that have prevailed in American policymaking since World War II (coincidentally the time frame of the movie in which Evans’ Captain America is first introduced).

Lesson 3: Celebrities’ opinions are matters of great political consequence. This is an objective fact whether we like it or not.

There is a rich hypocrisy about the way Duke used “typical dumb actor” as an insult to discredit Evans’ opinions. We’ve all seen this before: conservatives attempting to diminish the relevance of outspoken progressive celebrities on the grounds that we shouldn’t take them seriously just because they’re famous.

That said, there is a much more important political fact to acknowledge, namely that celebrities’ opinions matter. While this is mainly the doing of the political right wing, it is only fair that the left join in and try to use its celebrities for empowerment. A recent poll found that 66 percent of Democrats and independents want someone totally new to run for president instead of the current crop of Democratic leaders. Not surprisingly, many people are turning to a former celebrity as a potential front-runner for the 2020 Democratic presidential race: Al Franken, who is already an accomplished U.S. senator from Minnesota.

The era when we can profess surprise at the fact that celebrities express political opinions is over. The last major career achievement of the man currently sitting in the Oval Office was hosting a reality-TV show literally called "The Celebrity Apprentice." Chris Evans (whose uncle is Rep. Mike Capuano, D-Mass.) has every right to have his political opinions taken seriously, as do Meryl Streep, Alec Baldwin, Colin Kaepernick and anyone else with a platform whose voice people decide deserves to be taken seriously — whether it’s Donald Trump or another person.

Personally, I hope that even more celebrities stand up to Trump. Sixty years ago a large chunk of Hollywood worked with the right-wing demagogue Joe McCarthy as he ruined the lives of many innocent people in show business and throughout America. Today, when a right-wing demagogue is president and the stakes are even higher, show business has united to humiliate him on television, on Twitter and even at his inauguration.

Since the power of celebrity has been used to get America into this mess, thanks to Ronald and Donald, I see no reason to not applaud those who wield that power to try to get us out of it.