Adventures in old Brooklyn: Here's to the real ones, in a rapidly changing neighborhood

From his stoop in Bed-Stuy, I can see gentrification creeping up on my old friend O.G. and his housemates 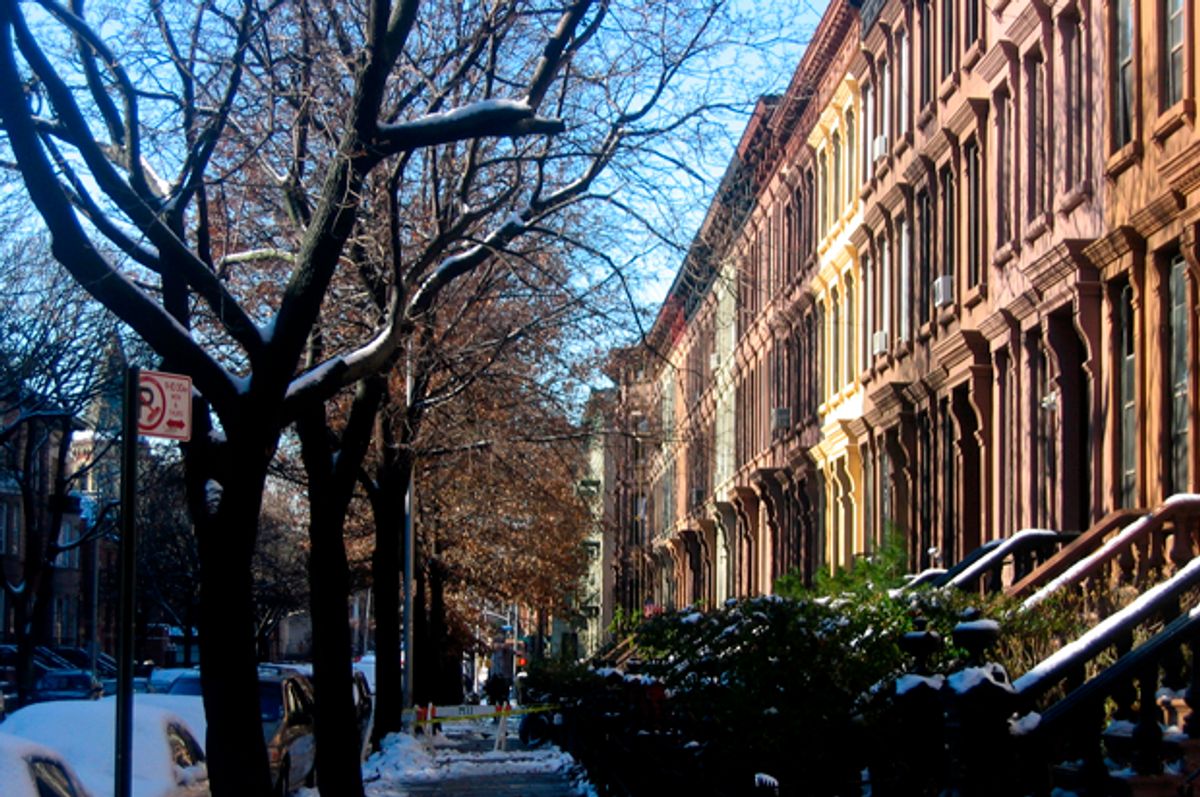 Who could have been happier than me that afternoon leaving a boring meeting with some boring people at a forgettable restaurant in Fort Greene, Brooklyn? I exploded out the door into a breezy New York day, their phony goodbyes and “we’ll be in touch, D!” following me out.

Left, right and straight ahead, the streets all looked the same to me: gentrified. I didn’t really know which direction to head in. So like most non-New Yorkers, I whipped out my iPhone and opened the Lyft app. My driver was four minutes away.

“Is that Lil Dwight?” yelled an older guy in a puffy army coat and new Yankees cap with a tilted brim. “Lil Dwight, D. Watk! What it do, baby boy?”

I squinted as he walked closer. His New York accent was heavier than his husky frame.

“It’s been like ten years, duke!” he replied, dapping me twice and then pulling me in for a bear hug.

The Lyft driver pulled up.“O.G., hop in this cab with me!”

“Nah, duke! I’m from Brooklyn, I ain't with that funny cab shit. Take a walk with ya uncle though. My spot up da block!”

O.G. is Brooklyn — the old Brooklyn, an original, not one of those transplants. You know them: The tradition erasers who swoop in, force rents to rise and start naming and claiming the blocks as their own, as if they were born there with roots that sink five generations deep. His mom didn’t name him O.G., but he is one — and since he’s old Brooklyn, he probably wouldn’t want his name tossed around in the press.

“I saw you on TV, duke!” He said, biting the plastic rapper of a Black & Mild and spitting it out. “You really bought B-more to CNN, like raw, too! It brought back hella memories! I was like, that’s my lil n***a! Salute da God!”

"But you just said you don’t call fouls?"

“Now I do because I’m from Brooklyn!”

Those rants on the court got him into a bunch of fights­­. Sometimes he won, sometimes he got stomped out, but he always came back, and that’s how he earned the respect of so many people in Baltimore.

“Word, Lil Dwight — I mean D. — my n***as I stay with were saying I don’t know you! We watched all of that wild-ass riot shit in B-more and you just kept popping up," O.G. said. "My man's daughter's reading your shit for school. They're gonna flip when we hit the crib.”

We strolled through a bunch of random blocks, the kind that make up the new Brooklyn, full of bearded blacks and whites who all dress the same: dark designer frames and cuffed skinnies with crazy-print socks over Air Jordans, Red Wing boots, shell-toe Adidas or worn-out Stan Smiths. The women dress mostly the same, too, except the ones who look like they buy their clothes from the closet of a '90s drug dealer: Moschino tees, big Coogi sweaters, Air Force 1s and bomber coats. (Imagine a skinny 20-something white girl in Park Slope auditioning to play a goon in a Nas video from '99.)

“You rich yet, lil homie? Out here grabbing a funny cab when you should be in limo — you rich and cheap, like them white n***as?” OG asked.

“Well, you should be rich! Not saying this 'cause you my lil homie, saying it because the news stay hiring these whitewashed fake n***as," he replied. "Let a real n***a like me manage you; we’ll get to the paper!”

He dapped me again. O.G. is old Brooklyn, so every conversation comes with 60 handshakes.

We banged a left onto Flatbush, catching up on everything from sports to mutual friends in federal prison to our own little episode of "Where Are They Now: East Baltimore Edition." O.G. had just come off a 10-year bid three years ago. Catching federal time was easy back in the early 2000s. Black dudes were being slapped with 10 years just because their names were popping up in conversations about drug crews. Imagine being flat broke and being charged as a kingpin.

O.G.’s crib was on Chauncey Street in Bedford-Stuyvesant. A dude with a skinny beard, built and dressed similarly to O.G., sat on the steps. “Yo, Fox! Look who I found, B.!” O.G. said, reaching out to him for handshake.

“Oh shit, bro, what’s good? Let me go get Turk!” said Fox, shaking my hand with both of his, presidential-style. “His daughter's reading your stuff for class! We really got an author in the hood!”

Fox went inside. I posted up out front with O.G. He pulled the Black & Mild out of his ear and sparked it. Mostly black and brown people passed us as we sat out front. Every once in a while a white jogger with an iPod arm strap ran by­­ — a key indicator that Bed-Stuy was prepping to become the next Fort Greene.

“I met Fox in the joint. He was a wild gun slinger back in the day,” said O.G., passing me the Black & Mild. “His cousin Turk got an uncle that owns this crib. He lets us rent it for cheap. Not sure how long before he wanna flip and make a money play. Shit, everybody else doing it.”

Fox and the other guy came out of the house and joined us on the steps: “Oh, big homie! We got a writer on the block! Salute, fam! I’m Turk,” the other guy said. “My daughter's class is reading your book up in Washington Heights, B! I ain’t read it yet, but if it’s anything like O.G. say about B-more, I know it’s raw!”

My friend Antoine, who's also from Baltimore, lives in New York now and is an administrator at a KIPP charter school way uptown near 170th Street. He worked really hard to get the school to purchase 100 copies of my first book "The Beast Side," and we're planning an assembly for the students later on this school year. Turk’s daughter is one of those students.

Turk dipped into the crib and came back out with three plastic cups and a fifth of Hennessy. “Gotta do some shots with the writer! They don’t come around here. Never! Watkins, you a real one!”

“Nah, it’s writers around here for sure. They just don’t really fuck with us," Fox interrupted. "All these damn white people with the laptop bags, all these n***as in glasses. Shit, somebody's writing something!”

I took long pull off the Black & Mild — the longest — inhaling the smoke until the ashes almost burned the plastic tip. “Yo. Honestly, I’ll feel like a clown if I wrote about black issues, the issues that affect black people, but not able to sit out here and be comfortable in my own skin,” I said.

O.G. agreed, holding a cigarillo in his left hand while slicing it down the center with his right index finger, allowing blunt guts to sprinkle out, dusting over his tattered Timb boots and the cuffs in his boot-cut jeans. Old Brooklyn. Turk filled our cups, and we toasted: "To being real ones."