Not everybody can agree about what makes a great romance, but this list has something for everyone 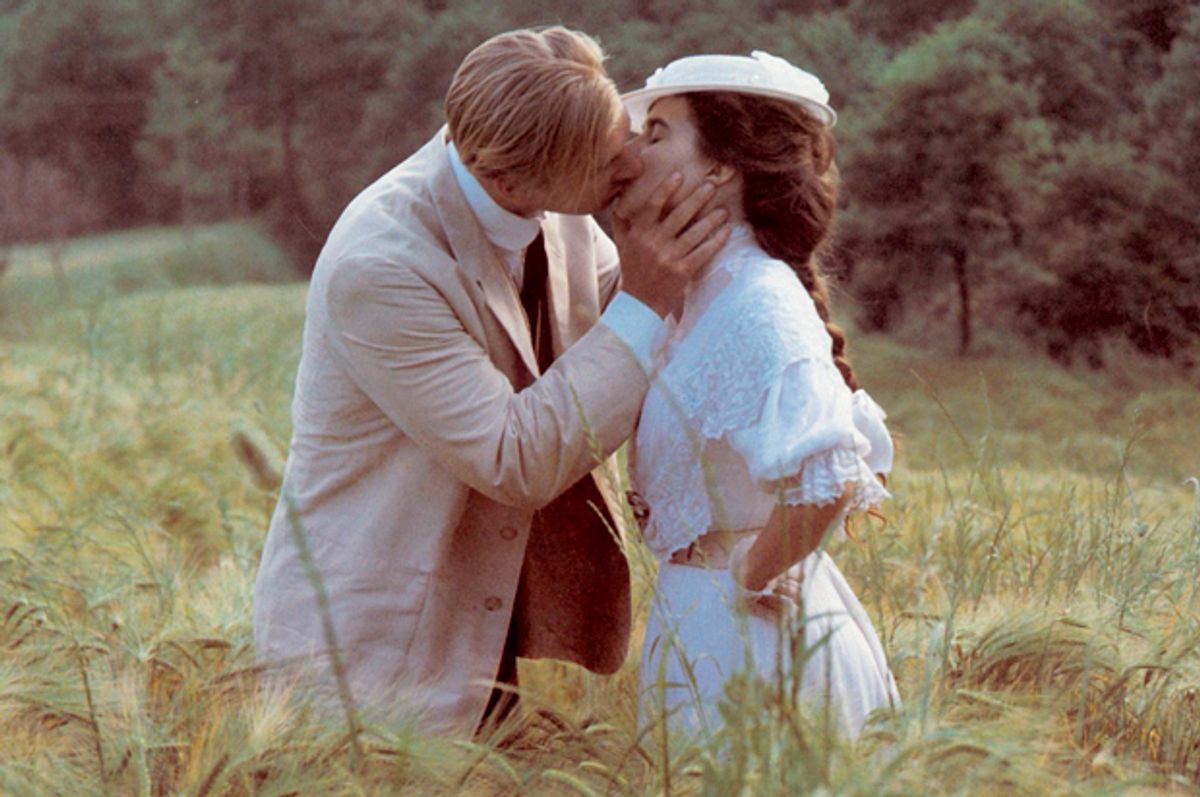 "A Room With a View" (Curzon Film Distributors)
--

Romance, like movie tastes, involves very personal passions. What makes one person swoon might not appeal to another. In preparing this column, I asked some friends about their favorite romantic films. I received some very diverse responses. My gal pal Wendy said, “Without apology, the final scene in ‘An Affair to Remember’ is my favorite romantic scene of all time.” She acknowledged it’s sappy, but it’s a classic Hollywood tearjerker, and I respect that.

My friend Bob offered a completely unexpected choice. “Pride of the Yankees,” he said, emphasizing that the relationship between Lou and Eleanor Gehrig (Gary Cooper and Teresa Wright) was for him truly romantic. His wife Jennifer shook her head at this suggestion, wondering what he was thinking. But then again her idea of a date film is “Who’s Afraid of Virginia Woolf?” They both, however, love “Shop Around the Corner,” so they are romantics.

In contrast, my pragmatic friend Chris thinks “The Bitter Tears of Petra von Kant” is a great, romantic drama. But he is a slow-burn kind of guy.

So what are the most romantic films for Valentine’s Day? Certainly not the Garry Marshall hodgepodge “Valentine’s Day.” I do appreciate “The Princess Bride,” but I don’t watch it repeatedly. Many people love “Love Actually,” but I absolutely abhor that film (save Bill Nighy). When I saw it in the theater, I recall wanting to race up the aisle as folks inanely rushed to the airport. (I know I’m not alone; several people I spoke with, including my pal Aaron, insisted I call out “Love, Actually”). But I do understand that people like my friend Janet actually love “Love Actually.” And that’s fine. It just gives me a rash, not ecstatic joy.

So while I am a total sucker for “The Notebook” — my friend Meghan observed that when we saw it that I unashamedly cried more times that she did during that fabulous, tearjerking weepfest — I don’t go for treacle like “The Bridges of Madison County.” Granted, my experience viewing that film was unusual. As a cigarette’s ash worth of the dowdy Francesca Johnson (Meryl Streep) was being scattered at the film’s end, my friend Carol, the pathologist, said to me, “I thought there’d be more of her than that!” As I burst out laughing — because Carol said exactly what I had been thinking — there were several viewers shouting at us, “Stop laughing. It’s beautiful. You’re ruining it!”

So here are the five films that stole my heart and made me weak in the knees. Maybe you will think fondly of them, too, or maybe you’d rather watch “Love, Actually” or perhaps even “Pride of the Yankees” — as I believe, when it comes to romance and movies, there’s no accounting for taste.

Jane Austen’s romantic dramas are much beloved, but for me, James Ivory and Ismail Merchant’s classic film version of E.M. Forster’s novel “A Room with a View” is truly swoon inducing. On tour in Italy, Lucy Honeychurch (Helena Bonham-Carter) faints in the main square in Florence and is rescued by the strapping gentleman George Emerson (Julian Sands).

All at once, he observes, “Something tremendous has happened.” And it has: George has fallen in love with Lucy. Not soon after, he swaggers up to her in a field and kisses her passionately. His confidence is sexy, and it’s all impossibly, gloriously romantic, especially with the Italian opera swelling on the soundtrack. (Viewers’ hearts will likely swell to bursting at the beauty of it all).

Yes, Lucy is troubled by her feelings for George — considering that she is engaged to Cecil Vyse (Daniel Day-Lewis) — but George is smitten. I feel his giddiness as he walks back to the hotel in the rain with a bounce in his step, knowing that fate has brought them together. It’s all so dreamy, and the emotions are completely palpable. “A Room with a View” is the Merchant-Ivory team working at the height of its powers. And for the record, while I care less for the filmmakers’ subsequent Forster adaptation, “Maurice,” it does have a truly erotic scene involving Scudder (Rupert Graves) entering the bedroom of Maurice (James Wilby) for a passionate tryst.

Stanley Donen’s sparkling romantic thriller has Reggie (Audrey Hepburn) chased by a trio of men in Paris. They don’t want her, just the money her late husband hid somewhere. Reggie doesn’t know anything about it, so she enlists the aid of the rakish Peter Joshua (Cary Grant), who tells her he’s the only man whom she can trust. Given all the lies and deception she encounters, however, is he after her money, too?

The mystery in “Charade” is clever but it also contrives to bring together the attractive leads in a series of romantic clinches, from a nightclub game of passing oranges that generates some real sparks to a scene where Reggie is charmed by Peter (renamed “Dyle”) showering with his clothes on. But the clincher is their cruise on the Seine, where he tells her, “Hasn’t it occurred to you that I’m having a tough time keeping my hands off you?”

As they pass by a series of lovers, illuminated by spotlight, all kissing on the banks, “Charade” becomes pulse quickening in the romantic sense. It’s a moment that prompts Hepburn and Grant to kiss, and viewers may likely feel amorous, too. In fact, I am convinced my father seduced my mother in a not-dissimilar fashion.

When I was a kid, I watched Claude Lelouche’s “And Now My Love . . .” endlessly on cable TV. The film isn't nearly as well-known as Lelouche’s romantic classic “A Man and a Woman ” but I prefer it. “And Now My Love . . .” has a man (André Dussollier) and a woman (Marthe Keller) leading separate lives before they meet up in the film’s final scene. I was reminded of “And Now My Love . . .” when I saw the enchanting Argentine romantic comedy “Sidewalls ” about Martin (Javier Drolas), a web designer, and Mariana (Pilar López de Ayala), a window-display designer, who live near each other and are perfect soul mates — if only they would meet!

Writer-director Gustavo Taretto’s film celebrates the architecture of Buenos Aires and makes viewers active participants in the game of connecting the dots between the two would-be lovers.  The film contains witty, clever sight gags, and the actors are both adorable. “Sidewalls” deserves to be discovered, especially by folks who enjoy Woody Allen’s “Manhattan” or “When Harry Met Sally.”

Barry Jenkins is gaining tremendous attention for “Moonlight,” but his first feature, “Medicine for Melancholy,” is just as deserving of praise. Micah (Wyatt Cenac) and Joanne (Tracey Heggins) are two African-Americans in San Francisco who spend the day together on one long quasi-date. They ride their bikes through the city, discussing housing issues, racial issues and art, among other things.

Jenkins’ film is not unlike other romances about a couple spending a day together — be it one of Richard Linklater’s lovely “Before Sunset/Sunrise” films, the fantastic Costa Rican romance “Viaje” or even the recent Obama drama “Southside with You.” But “Medicine for Melancholy” is a refreshing, low-key charmer and sure to cheer up even the most cynical romantic. I find Jenkins’s film tender and passionate in part because of the slow-burn nature of their relationship. It’s how I like to fall in love.

When it comes to our favorite romantic movie, my partner Mike and I both immediately think of Everett Lewis’ gem “Luster.” Seriously, if I cue the film up and he hears the music, Mike runs into the room like Pavlov’s dog. Jackson (Justin Herwick) is a blue-haired slacker-skater-poet in Los Angeles who works in an indie music store. His best friend Sam (the fantastic Shane Powers) is secretly in love with Jackson, but the goofball slacker is far too distracted (read self-absorbed) to notice.

Instead, Jackson is intrigued by a bad boy named Billy (Jonah Blechman), who is all wrong for him. Jackson is also ignoring the flirtatious Derek (Sean Thibodeau), a nice guy who falls in love with him at first sight. This is because Jackson finds himself unexpectedly attracted to his sexy cousin Jed (b. Wyatt), who arrives from Iowa out of the blue. What makes “Luster” shine is that Jackson’s crushes and heartbreaks are all so heartfelt. Mike and I cheer and ache at the romantic roundelay that plays out as the characters all couple up with one another (or try to). Lewis has made a sweet, scrappy little film, and we have the same affection for his characters as he does. And what’s not to love about a seductive movie that opens and closes with its characters getting naked in the name of love?