"I think this is Pearl Harbor for the true Trump supporters," Roger Stone says 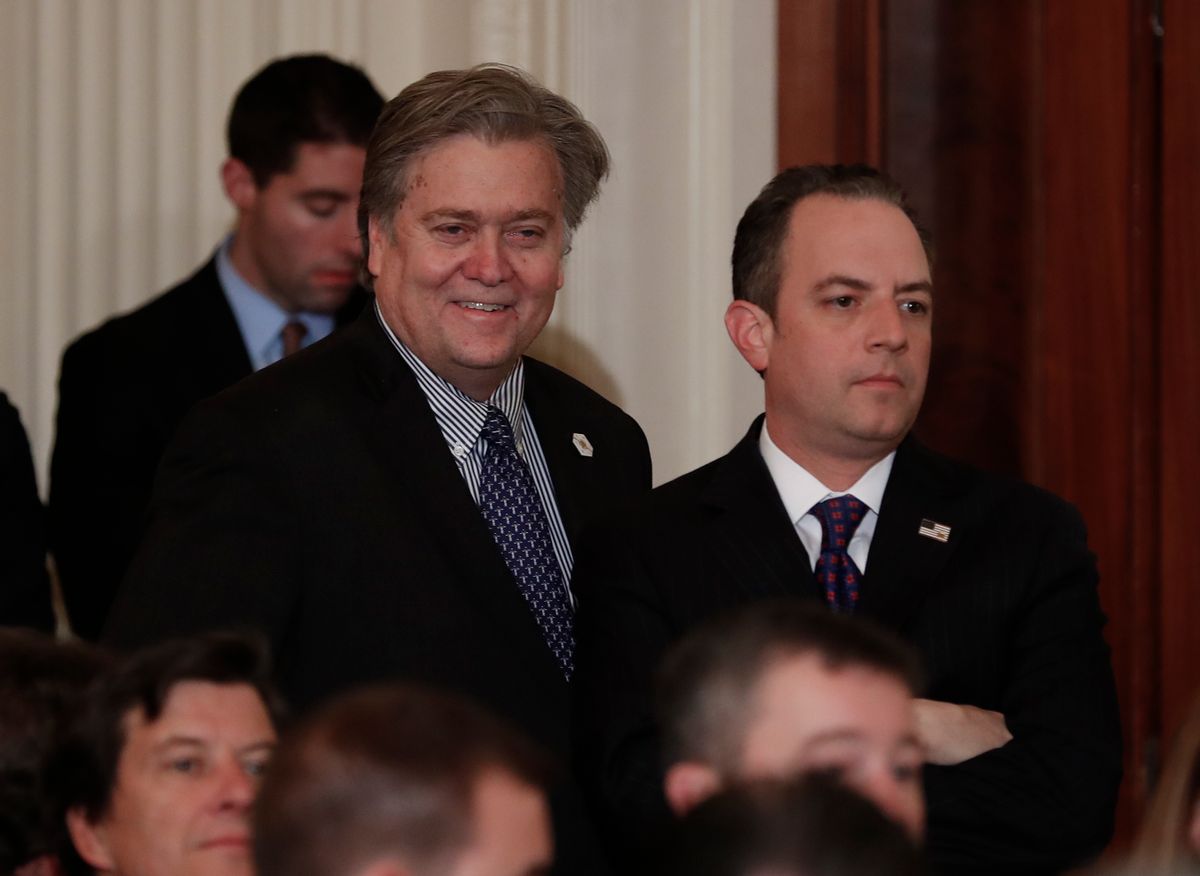 Several of Donald Trump’s most vocal right-wing supporters have rushed to inoculate the beleaguered president from the latest scandal to engulf his administration by attempting to set off a civil war between his closest White House aides.

Petty infighting is playing out in anonymously sourced media reports that depict a White House inundated by chaos and dysfunction. But amidst even a time of deep turmoil within the administration, one particular report stands out as an obviously transparent attempt to scapegoat chief of staff Reince Priebus for a series of high-profile stumbles.

On Tuesday, Breitbart published a blistering report blaming Priebus for the cascading controversies that have consumed the new administration's first few weeks in office.

Matthew Boyle, Breitbart’s political editor who has covered Trump sympathetically in the past, cited three unnamed sources close to the president to speculate that Priebus’ time in the White House may be short. Boyle’s anonymous sources portrayed Priebus as in over his head and ineffective at working with Congress.

[Priebus] is not effectively working Republicans on Capitol Hill like his friend House Speaker Paul Ryan to push through key legislative items that Trump campaigned on, like the repealing and replacing of Obamacare and tax reform among other initiatives. Sources close to the president question whether Priebus will be able to stomach pushing through major pieces of legislation down the road, like the president’s infrastructure plan, a plan for the promised border wall, or the building up of the military among other things.

Also breaking late Monday was the revelation that House conservatives in the House Freedom Caucus and Republican Study Committee — led by Rep. Mark Meadows, R-N.C., a key Trump agenda ally on Capitol Hill — are now going to pressure House GOP leadership on repealing Obamacare faster since Ryan, and by extension his friend Priebus, have failed to get the Trump healthcare agenda moving in the first few weeks of the new administration.

Breitbart went on to accuse Priebus of knowing about Obama administration holdovers acting as “sleeper cells” to undermine the Trump administration. Boyle’s unnamed sources blamed Priebus for the damaging leaks coming out of the White House.

“White House and other government sources say there are as many as 50 of them throughout government, and Priebus has full knowledge of their whereabouts, who they are, and what potential for damage they may cause,” Boyle reported.  “He is not doing anything about it, these sources add.”

Boyle’s report was widely regarded as an effort by allies of Bannon, the former CEO of Breitbart, to scapegoat his rival and ensure he doesn’t take blame for recent scandals like the resignation of Gen. Michael Flynn as Trump's National Security Adviser. It was of little coincidence that the report of a power struggle between competing spheres of influence within the White House appeared in an outlet that the president likes to read.

“All of this could derail Trump’s presidency if he doesn’t fix it soon, and quickly bring in someone new as Chief of Staff who can smooth out the rocky start and get things back on track sooner rather than later,” Boyle wrote in an article in which the name “Bannon” is never mentioned.

Another unnamed senior White House official told the Washington Post that although Flynn lied to Vice President Mike Pence, who only found out about the FBI’s investigation when it was reported in the media, Pence was willing to allow Flynn to stay on as National Security Adviser, but that Priebus “didn’t want to let it go.”

But Bannon was quick to pushback on claims that his camp is using the Flynn scandal as cover to undermine Priebus -- even though if Priebus were to be sacked, Bannon would be able to consolidate his already powerful White House position. (The New York Times reported that it was actually Bannon who asked Flynn to resign over the weekend.)

Bannon told the Atlantic’s Rosie Gray that Breitbart’s report was “absurd.” And, according to Axios, Bannon called Boyle and gave the Breitbart editor "both barrels," according to a source familiar with the conversation.

The Breitbart story “false in every single possible respect,”  a senior White House official, who dismissed the notion that Bannon had been behind it, told the Atlantic.

According to The Hill, White House press secretary Sean Spicer, who only days earlier sat with the news outlet for an exclusive interview in the White House, also sent Breitbart a testy missive.

“What are you talking about? What possibly could have been done to get [Attorney General Jeff] Sessions done quicker? Is there some way he could have made Democrats vote?” Spicer said in an email to Boyle.

The White House has gone so far as to suggest that Bannon and Preibus have such a close working relationship that it is akin to “co-parenting,” according to CNN:

One alliance that appears to be solid right now is that of Priebus and chief White House strategist Steve Bannon.

They have a close working relationship, several administration sources told CNN, and Bannon sees Priebus as a partner.

Still, the long knives are definitely out for Priebus — even if they aren’t being directed by Bannon.

Priebus entered the White House facing deep suspicion from Bannon and others in Trump’s inner circle, who view the former Republican National Committee chairman as a representative of the GOP establishment.

According to CNN, “Multiple Trump sources describe aides as worried that on any given day they could get fired because of a leak, or because another White House staffer may be out to get them.”

“I think this is Pearl Harbor for the true Trump supporters, the Trump loyalists,” Roger Stone, longtime Trump loyalist and former Trump campaign adviser, told Gray. “I believe Reince Priebus moved on General Flynn and I think he intends to move on Steve Bannon and Stephen Miller next. He is not serving the president well. The people he hired are loyal to the Republican National Committee, not the President of the United States.”

After his longtime friend, CEO of conservative Newsmax, Chris Ruddy, called Priebus "weak" this weekend, the president made a point of telling reporters Monday that Preibus is doing a "great job."