Is YouTube sensation PewDiePie really a Nazi? His intentions matter less than his effect

The YouTube superstar has become an alt-right hero, mirroring the nerd-to-Nazi transition of 4chan and others 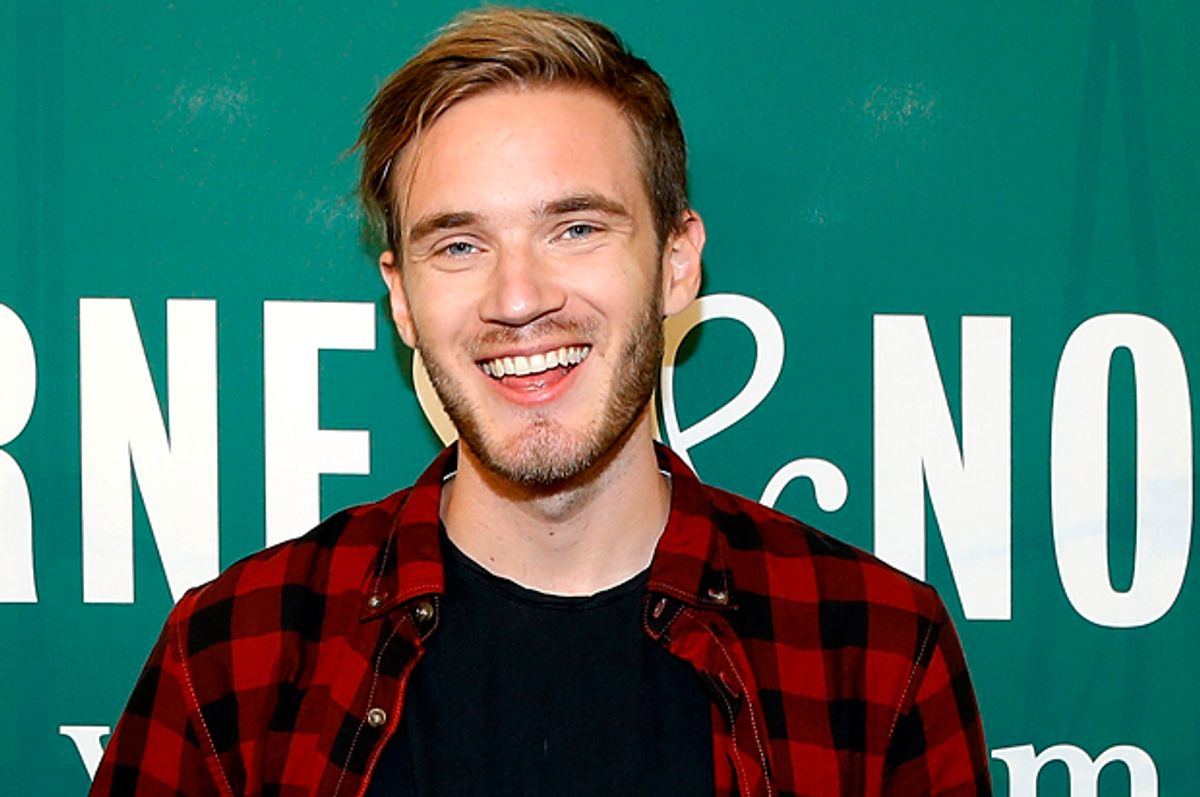 Regular Salon readers have likely never heard of the YouTube celebrity PewDiePie — or at least not until very recently. PewDiePie, whose real name is Felix Kjellberg, belongs to a growing legion of vloggers being cultivated by Google and other media companies desperately seeking a way to monetize the internet traffic of younger adults who love ad blockers and hate stodgy political punditry.

With more than 50 million subscribers on YouTube, PewDiePie is currently the video-hosting service’s No. 1 poster. He has also become the focus of controversy after The Wall Street Journal noted that several clips that Kjellberg recently uploaded incorporate Nazi imagery. Another, which is still online, features two men whom Kjellberg paid to hold up a sign saying, “DEATH TO ALL JEWS” while dancing around and laughing.

In November Kjellberg tweeted a response to a fan who had asked him when he had become a Nazi, saying that he was “aryan, superior genetics since birth.”

After the Journal report, Disney announced that it was removing Kjellberg from its Maker Studios program. Later Google announced that it was canceling a second season of his online show “Scare PewDiePie.” The internet giant did not remove all its advertising from his commentary clips, however, and has not banned him from YouTube.

In a response posted on Tumblr, Kjellberg said that people shouldn’t be offended at his clips and that his apparently anti-Semitic video is being taken out of context.

“I was trying to show how crazy the modern world is, specifically some of the services available online. I picked something that seemed absurd to me — That people on Fiverr would say anything for 5 dollars,” Kjellberg wrote.

He also denied that he backed neo-Nazis:

I think it’s important to say something and I want to make one thing clear: I am in no way supporting any kind of hateful attitudes. As laughable as it is to believe that I might actually endorse these people, to anyone unsure on my standpoint regarding hate-based groups: No, I don’t support these people in any way.

Ultimately, only those who know Kjellberg personally can comment on the accuracy of that assertion. Even if he's joking, however, the reality is that many neo-Nazis on the alt-right think Kjellberg’s antics are genuine. In the past few weeks, the Daily Stormer, the internet’s most popular racist blog community, rebranded itself as “the world’s #1 PewDiePie Fansite,” complete with a banner image of Adolf Hitler and the YouTube star.

The Daily Stormer graphic also includes a photo of Ainsley Harriott, a British celebrity chef whose image appeared in a supposedly humorous meme about gassing Jewish people. A photo cutout of Harriott was featured in a January clip that Kjellberg released, in which he satirically attempts to summon the spirit of Hitler after playing the anthem of the German National Socialist Party.

Andrew Anglin, Daily Stormer’s creator, has praised Kjellberg profusely for months. He was ecstatic over the Harriott clip:

A guy with 52 million YouTube subscribers is subtly pushing esoteric Hitlerist magic to his base under the guise of humor. This is for real. 2017 and PewDiePie is a leading neo-Nazi white supremacist.

In a September post, Anglin enthused about another Kjellberg clip in which he attacks a YouTube content alert program. According to Anglin, the community alert program was a Jewish plot and Kjellberg is a hero for criticizing it:

PewDiePie has the biggest audience of any media figure in the world. At 26-years-old, he is making a million of dollars a month [sic]. And yet, he is willing to risk this job by standing up for the White race, endorsing Hitler and Trump and attacking the [Jews].

Kjellberg may deny having any sympathy for Anglin's views, but in many ways the road he has been treading is very similar to the route taken by many of his racist fans, particularly those affected by the culture of 4chan and its offshoots, which began as no-rules forums catering to socially unsuccessful nerds angry and frustrated at a world that was frequently cruel.

Over time, just like their favorite musical star Moon Man, the popular image board's posters transitioned via libertarian nihilism into the self-described “full-on Nazis” who now comprise the bulk of the extremist group now known as the alt-right. (Which, as I have previously explored, did not begin as an overtly racist movement.)

The process by which 4chan became a forum for white supremacists and neo-Nazis has been been documented occasionally over the years by a handful of geek-culture writers and academics. Perhaps the best and most comprehensive discussion was published just a few days ago by liberal comic artist Dale Beran in a lengthy Medium post that chronicles his observations of the site after he began reading it two years after its 2003 founding.

As Beran noted, 4chan may be one of the most influential websites in the English-speaking world. Originally created as an American answer to a Japanese site that catered to geeks obsessed with anime and the complicated and elaborate systems associated with it and science fiction generally, the message board also included random discussions and humor about the news and popular culture. Many popular internet memes and subcultures, from "lolcats" to "rickrolling" and "bronies," and even the concept of an internet meme itself, originated on 4chan.

From the beginning, 4channers gloried in being offensive. Their civil libertarian attitude toward virtually anything soon led to the idea of web posting being performance art, a sort of nihilistic dadaism that exalts in exposing absurdity and striking back against the powerful and the pompous. The site’s convention of having no usernames (all users post as “Anonymous”) encouraged and catered to that sensibility as posters fled their isolation in the “normie” world to band together in the web collective, which they soon realized could achieve much greater power than any one of them could have done individually. At last, the weak could become strong.

After achieving some success in exposing the secrets of Scientology and sharing decryption keys for Blu-ray DVDs, some users within the 4chan community began to think that caring about things just might be OK. Part of that faction split off and became the left-leaning group of hackers calling itself Anonymous.

All the while, people on 4chan continued to post random racist, violent and pornographic images, supposedly just for the lulz (or laughs). Eventually, many users of the site began backing the presidential campaign of Rep. Ron Paul, the political candidate who epitomized their culture, both politically and personally. The former Texas congressman seemed to be an almost perfect fit. Painfully nerdy, he is doctrinaire about nearly everything. He is also extremely committed to a strain of libertarianism of such high order that it rejects the Civil Rights Act and frequently defends the Confederacy.

After Paul’s two Republican presidential bids (in 2008 and 2012) went nowhere, 4chan’s cabal of libertarian nihilists completed their transition from telling Nazi jokes to actually believing Nazi propaganda. Anglin, a longtime 4chan poster in his own right, described the metamorphosis of the site’s “politically incorrect” /pol/ board thusly:

Anti-Semitic and racist jokes had been a key feature of /b/, but on /pol/ the sentiments behind the jokes slowly became serious, as people realized they were based on fact. . . . Non-ironic Nazism [began] masquerading as ironic Nazism.

The pent-up energy that had accumulated during the intervening time was unleashed by “Gamergate,” a massive protest against what the 4channers saw as an encroachment of leftist feminism into the traditionally male-dominated world of video gaming, one of the few places of refuge for self-proclaimed “neckbeard” nerds to congregate.

The cyber-activist campaign against feminist game developers and the left-leaning industry journalists the 4channers saw as enabling them went mostly unnoticed by the political media. But it led to some real changes within the gaming world and also gave the newly minted activists a real sense of cohesion and purpose, as Beran described it:

The campaign of Ron Paul enabled the proto-alternative right to understand that the GOP establishment and the [William F.] Buckley conservatives were dishonest and would never respect the will of the people or play fair according to the previously established rules. GamerGate taught the right-wing members of it how to fight the media establishment and win.

No one can say for certain if PewDiePie is stuck in a Nazi feedback loop. Certainly there are observers, including Jewish people, who believe he isn’t.

At the end of the day, however, PewDiePie's content, and how others understand it, may matter more than his conscious intentions. As the Daily Stormer’s Anglin put it in a January post:

Some may ask "is Pewdiepie really racist? Is he really a Nazi? Does he really want to kill all Jews?" Who knows. He could be doing all this only to cause a stir things up [sic] and get free publicity. Ultimately, it doesn’t matter, since the effect is the same; it normalizes Nazism, and marginalizes our enemies.