"Men and women see that relationships are not working out the way they used to": Verónica Echegui stars in “You’re Killing Me Susana”

Playing a writer who leaves a jealous lover, Echegui doesn't share the character's ambivalence, but honors the role 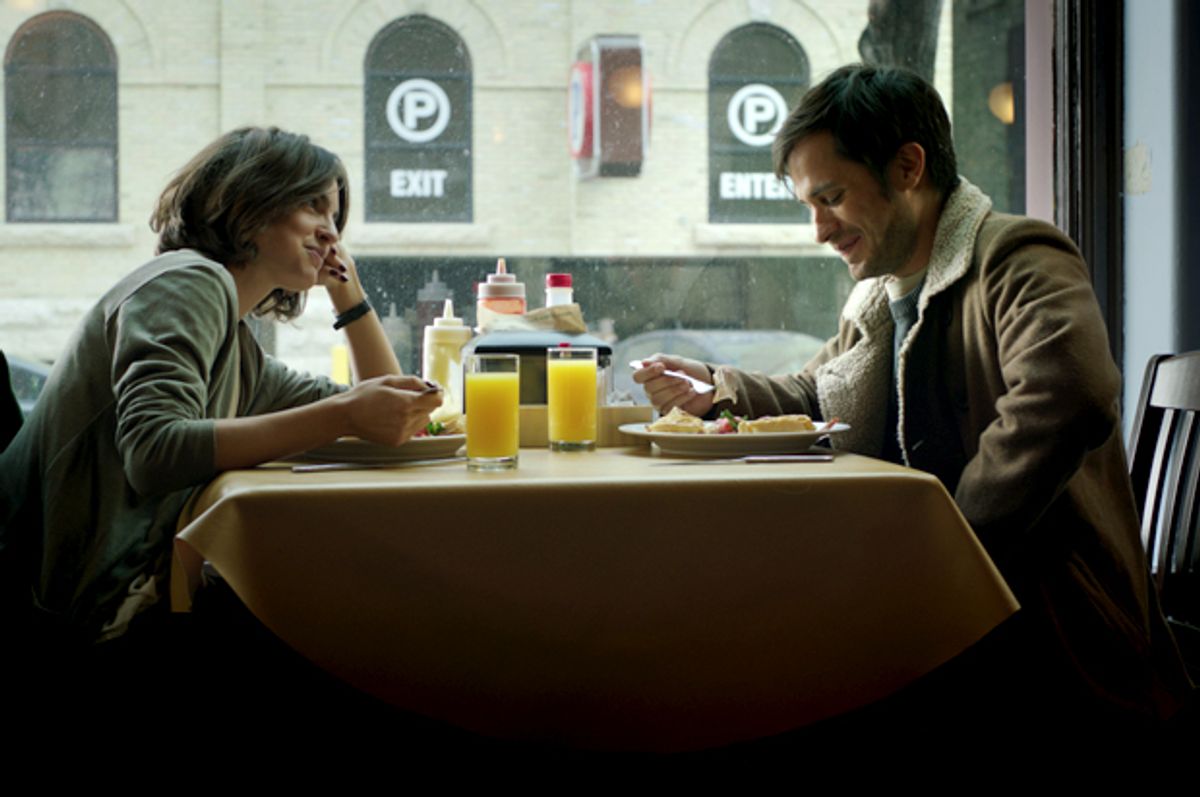 "You're killing me Susana" (Cuévano Films)
--

As the title character in “You’re Killing Me Susana,” Verónica Echegui leaves her feckless boyfriend Eligio (Gael Garcia Bernal) in Mexico and heads to a writer’s workshop in the American Midwest. Happily living and writing on her own, she is surprised when Eligio shows up, wanting to reconcile. She’s willing to go back to him, but their relationship is complicated by Susana’s attraction to Slawormir (Björn Hlynur Haraldsson) a Polish poet, a situation that causes Eligio to become jealous. But in an alpha male double standard, Eligio flirts with Irene (Ashley Grace) an American girl, complicating things further.

Director Roberto Sneider plays the romance in “You’re Killing Me Susana” as anxious farce, with intense moments of the characters fucking and fighting. Echegui portrays the lovelorn Susana as a complex woman who seems to love her independence, the thrill of the chase and also her partner, however flawed he is. The Spanish actress, who was also featured in the Henry Cavill thriller, “The Cold Light of Day,” gives a vibrant performance as Susana.

Echegui spoke with Salon about her character, her observations on relationships and her sex scenes.

Susana has an air of mystery about her; it’s like Elegio says, “I like her but I don’t get her.” What did you think about Susana’s character, her strengths and weaknesses, and how did they align with yours?

When I read the book [the film is adapted from], I loved that Susana was a feminist. When we did the film, she was portrayed as a more vulnerable woman. I would have loved to have been a more feminist Susana, but Roberto [Sneider, the director,] loved that my character wasn’t a super-powerful woman. He wanted to focus on her weakness.

Why she can’t stop and tell Eligio what she is feeling rather than escaping from him? Instead of confronting him, she keeps running away. Why is she unable to confront him? So [Eligio's] very macho, which is what Roberto wanted. My process was to justify her behavior. The love story is the story of two people who can’t find a common ground with each other. They want to communicate, but they aren’t able to.

It’s a toxic relationship. Elegio is unable to be empathic, and he is so selfish and possessive. She does not put limits on him or express what she needs; that’s why she’s mysterious. She’s strong, but she is also a lost little bird.

Do you think Susana likes the chase? That she trusts Eligio to come back? That her leaving is a way of controlling the relationship?

Of course, that’s a consequence. She feels that’s the only way she can be in control. That’s when she sees how much he loves her. It is a mousetrap. They run in circles but can’t face their problems. They are immature.

What are your observations about marriage and relationships? Have you had a relationship that mirrors the love-hate relationship between Eligio and Susana?

Not really. When I was younger, I played games in relationships I had that weren’t serious. But now I talk about what I feel, even too much maybe. I don’t play power games.

There seems to be a real double standard for Eligio, a Mexican macho; he can flirt and sleep with other women but he is incredibly jealous of Susana when she behaves the same way. What are your thoughts on that in terms of how the film shows it and how life is?

Wah! It’s terrible! But it’s a reflection of the patriarchal society we have and how women and men behave. Not me! I think we all have this tradition where we inherit information. When [I read the film's script] I am portraying something I don’t agree with. There is this comic side of it, but it’s tragic and dramatic because we’re talking about sick people. In the process, I never judged Susana, but I thought all my friends will kill me [for playing a weak woman like this]. But it’s true that people like Susana exist.

Do you think the film might change the macho behavior it exposes?

If you see something that mirrors your own situation — even if it’s someone else’s story — that’s a powerful way of understanding it. I work hard on equality, and when I work things out with my boyfriends, I try not to behave in a way that is like being in service to them. But that is what is ingrained in our DNA. Our ancestors have been passing down the same information, and women, generally speaking, are taught to “serve” and please men.

If I screw up things, I ask for forgiveness. But we need to free ourselves from that, and if we change, everything around us will change as well. Men and women see that relationships are not working out the way they used to, so we are trying to find a new way of connecting. It’s a job. Machismo is everywhere. We need to re-educate. Men are trapped in their archetypes. It’s ridiculous.

Much of the film has been improvised. Can you talk about that process and how you worked with Gael in those scenes?

We didn’t really have rehearsals. I studied two weeks before shooting to get a Mexican accent, since I was playing a Spaniard living in Mexico for seven years. We shot in Winnipeg. Roberto [Sneider] spent an hour or two before shooting to discuss and try things. It was relaxed, and he was open to trying things.

There was one 10-minute scene when Eligio finds Susana in the writers’ residence. We shot that scene for two days and it was exhausting. That was the process. We tried the lines and we changed things. It was good that we could improvise, but the problem was we didn’t have enough rehearsal time!

You got to have on-screen sex with Gael Garcia Bernal. What can you say about that experience?

He’s very nice and very funny. I felt comfortable with him. He’s a happy relaxed guy and very laid back. We talked about the scenes first. He created something very good.

I found your nude scenes uncomfortable, even when they showed a vulnerability to your character. But I also felt the scene where you are naked in the hotel room was showing Susana in a position of strength and defiance. Can you talk about how Susana uses her body?

The way you use your body can be the opposite of what it seems. I felt like she shows herself the way she is. In the hotel room, she is the most exposed she is in that moment. He’s interrupted her fucking someone. What can she say? “I’m fed up with you invading me my space and my life? Just come in. I’m not going to apologize!”

Do you think Susana and Eligio deserve to be together?

I don’t know. They could be like that for ages. They have an addiction. I see them as addicts. They love each other, and that’s healthy, and they enjoy each other, but the other part of them is that they aren’t solving the problems. This is the first time [apart] after seven years. This is her breaking out and trying to get his attention. She’s trying to find herself and go for her dreams.

We can be more positive, and I’d love to see that film. I’m fed up with watching films about love rotting and melting away. I’d like to see more films about people coming back and building something new. “I love you” forever is not realistic. We are lacking stories that are in the middle of those extremes.

Susana is a writer. I’m curious to know what authors you like to read?

You have worked in British, American and Mexican films, which rely on you playing Spanish. Can you talk about being an international actress and working outside your home country?

It’s weird, because in the last eight years, things have been changing very fast. It used to be hard to play in American films. A Spanish actress, Laia Costa, played in the [German] film “Victoria,” and so everything is getting to a place where it’s so global and open. I love languages and traveling, and while I love Spain and want to keep working there, there are so many interesting talented people everywhere. I [want] to keep the doors open.

I loved making an Italian film. I want to make a French film. I have access to that, and it’s quite overwhelming. It used to be you dreamt of Hollywood and winning an Oscar and being a star, and now there are talented people everywhere and there’s a huge, growing market. You can do an amazing film in Poland and show it off in Los Angeles and then end up in an American independent film. I want to keep working outside Spain. I love the United States and your TV series. But the market is so global and international.