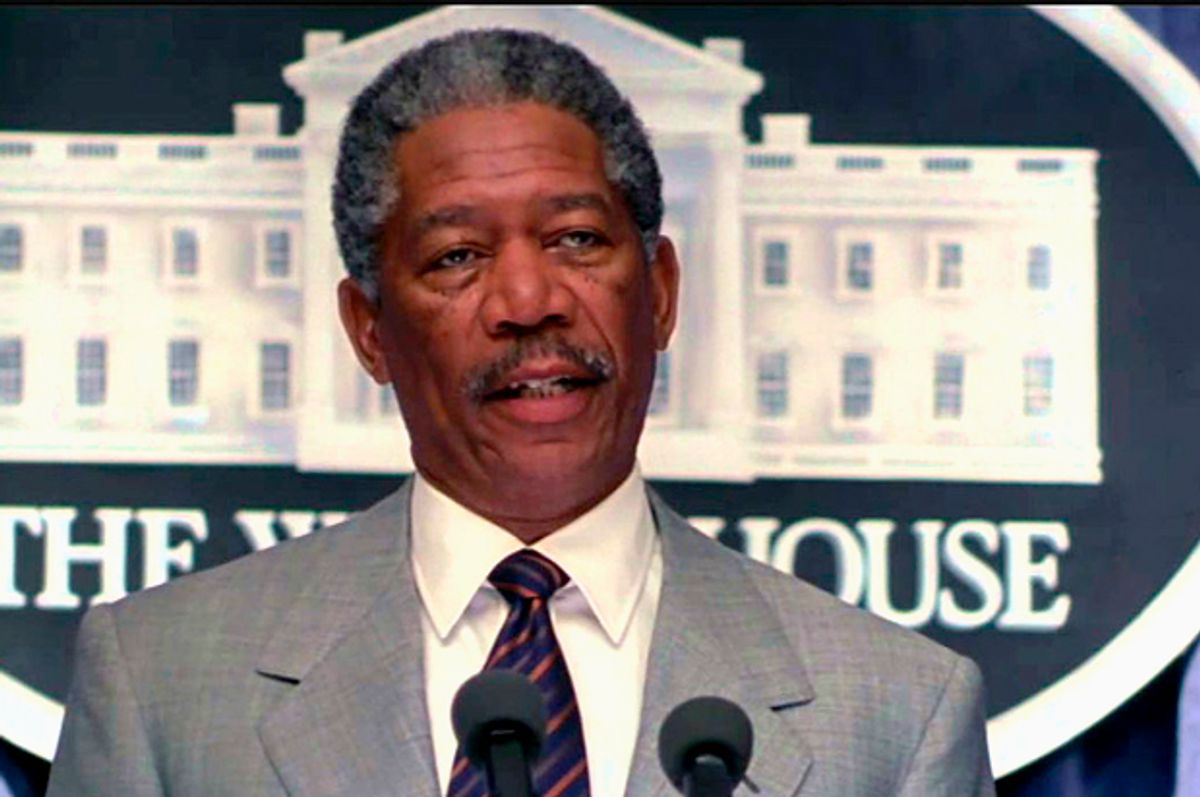 “Anyone can be president” is one of the taglines for Robert Altman’s film, “Secret Honor,” about Richard Nixon. And that sentiment certainly seems to be true with the current administration. So in honor of Presidents’ Day, here are fictional cinematic presidents, ranging from comedic to dramatic to downright sinister, that we would rather see in office.

Dave Kovic (Kevin Kline) works part-time as a presidential impersonator. When POTUS Bill Mitchell (Kline) falls into a coma (during an extramarital assignation with a staffer), his power-hungry chief of staff, Bob Alexander (Frank Langella), asks Dave to pose as the commander-in-chief to prevent both the potential sex scandal and the VP, Gary Nance (Ben Kingsley), from assuming office. Of course, acting as president Dave is less inclined to serve Alexander’s needs, and instead serves the people. He also gets Ellen (Sigourney Weaver), the First Lady, to fall in love with him — because she isn’t aware of the switcheroo. So a regular guy can be president, and do some good in the midst of corrupt politicians.

2. President Merkin Muffley in “Dr. Strangelove or: How I Learned to Stop Worrying and Love the Bomb”

Stanley Kubrick’s blistering black comedy about politics and the Cold War has General Jack D. Ripper (Sterling Hayden) starting a nuclear war with Russia without President Merkin Muffley’s (Peter Sellers) knowledge or authorization. Oops! This event prompts a hilarious hotline phone call where President Muffley informs Soviet Premier Dmitri Kissoff what has occurred. It’s hard to imagine 45 displaying Muffley’s patience and humility in a real-life phone call. This may be why, more than 50 years after it was made, “Dr. Strangelove” remains such a timely and cogent satire.

In director Rob Reiner's romantic comedy-drama, written by future “West Wing” scribe Aaron Sorkin, the fictional title character Andrew Shepherd (Michael Douglas) is a widower and father who is attacked after he unexpectedly falls for lobbyist Sydney Ellen Wade (Annette Bening). In a rousing, inspirational speech, he attacks his rival for spreading fear and blame. He talks about the Constitution, citizenship and freedom. And he passes an energy bill that fights the effects of global warming and throws out a crime bill. Yes, Andrew Shepherd is the kind of (liberal) president with character and American values who can make America great again!

In Mike Judge’s comedy, set in 2505, President Camacho (Terry Crews), shoots off a semi-automatic during his State of the Union speech to quiet the angry South Carolina representatives. He understands that “everyone’s shit’s emotional right now,” what with the dust storms and the lack of French fries. He asks Joe (Luke Wilson), the smartest man alive, to fix things, like healing the economy, and curing acne and carsickness while he’s at it. Shortly after Joe becomes vice president, he ascends as Camacho’s successor, hoping to perhaps reverse the dumbing down of America. And that is a president to celebrate!

5. President Benjamin Asher in “Olympus Has Fallen” and “London Has Fallen”

Mike Banning (Gerard Butler) is a Secret Service agent whose efforts to save President Benjamin Asher (Aaron Eckhart) result in his wife (Ashley Judd) dying. While Banning is disgraced, he gets a chance at redemption when Korean terrorists attack the White House. President Asher is taken to a bunker for safety, and is later taken hostage. Asher may spend much of his screen time strung up and powerless,  but he does get to head-butt a traitor and take down a few guys. Still, Banning is the muscle here and he keeps Asher alive to honor the fallen and return for the sequel.

In “London Has Fallen,” President Asher’s new wife (Radha Mitchell) is expecting. But before the baby comes, Asher has to head to London to pay respects to the late prime minister. Unfortunately, the city is attacked and a double-cross has Asher ambushed by a terrorist who wants to execute him live on the Internet. “London Has Fallen” again puts the president in a hostage situation, which requires Banning’s help to resolve, in decidedly jingoistic fashion.

Maybe because he directed a successful president-in-peril film (“In the Line of Fire”), Wolfgang Peterson was asked to direct this serviceable thriller. In “Air Force One,” President James Marshall (Harrison Ford) visits Moscow after working with the Russians to capture Ivan Radek (Jurgen Prochnow), a Kazakstani dictator who was stockpiling nuclear weapons. En route back to America, Air Force One is hijacked, and the president’s safety will be exchanged for the release of Radek. However, President Marshall, an ex-soldier who was honored for his heroism in Vietnam, is not going to let the terrorist win or his family die. Yeah, if another actor were ever to become president, you kind of want it to be Harrison Ford.

President Tom Beck (Morgan Freeman) is concerned about his federal budget, but then comes the news about a comet headed toward Earth. President Beck tries to be reassuring (hey, it is Morgan Freeman, after all), but then the country’s bad financial situation is exposed, and the prez kind of has to admit that a world-ending catastrophe might happen in the next year. A mission is deployed to try to blow up the comet, but it hits snags and all hell breaks loose. And while he may appear to be grace under pressure (hey, it is Morgan Freeman) Beck declares martial law, and chaos reigns. Will the comet end life in Earth? Spoiler alert: “Deep Impact” features an inspirational presidential speech (is there any other kind?!) and a scene of the Capitol being rebuilt.

Don’t you hate it when an alien invasion ruins your plans for fireworks? In this Oscar-winning blockbuster, President Thomas J. Whitmore (Bill Pullman) learns of an impending alien attack on July 2. He escapes to Air Force One while the aliens destroy major cities. However, when Whitmore meets the aliens, they immobilize him — but not before he was able to “see their thoughts” and figure out their nefarious plan of moving from planet to planet to consume every natural resource. Whitmore then orders, “Nuke ’em! Let’s nuke the bastards!” Talk about a take-charge commander-in-chief! He even joins the mission, firing missiles in an effort to destroy the alien spacecraft.

Before he played President Bartlett on “The West Wing,” Martin Sheen was a psychopathic president in “The Dead Zone.” A panicked empath, Johnny Smith (Christopher Walken), determines he must stop Stillson from wreaking havoc on the world. How evil is Stillson? During a sniper scenario, he is seen using a young child as a shield, which is not very presidential. In fact, it prompts the headline, “No Future for Stillson.” It’s a chilling portrait of power run amok.

President Alan Richmond (Gene Hackman) probably isn’t a good role model for Presidents’ Day. He’s a drunk. He’s having affairs. He likes rough sex. He is responsible for a woman’s death. His cabinet is filled with amoral folks. And he suffers from hubris, thinking he can get away with it. Hmm. . .

Absolute Power Air Force One Dave Deep Impact Dr. Strangelove Or: How I Learned To Stop Worrying And Love The Bomb Idiocracy Independence Day London Has Fallen Olympus Has Fallen The American President The Dead Zone