Milo, Donald Trump and the outer limits of hate speech: When does absolute freedom of speech endanger democracy? 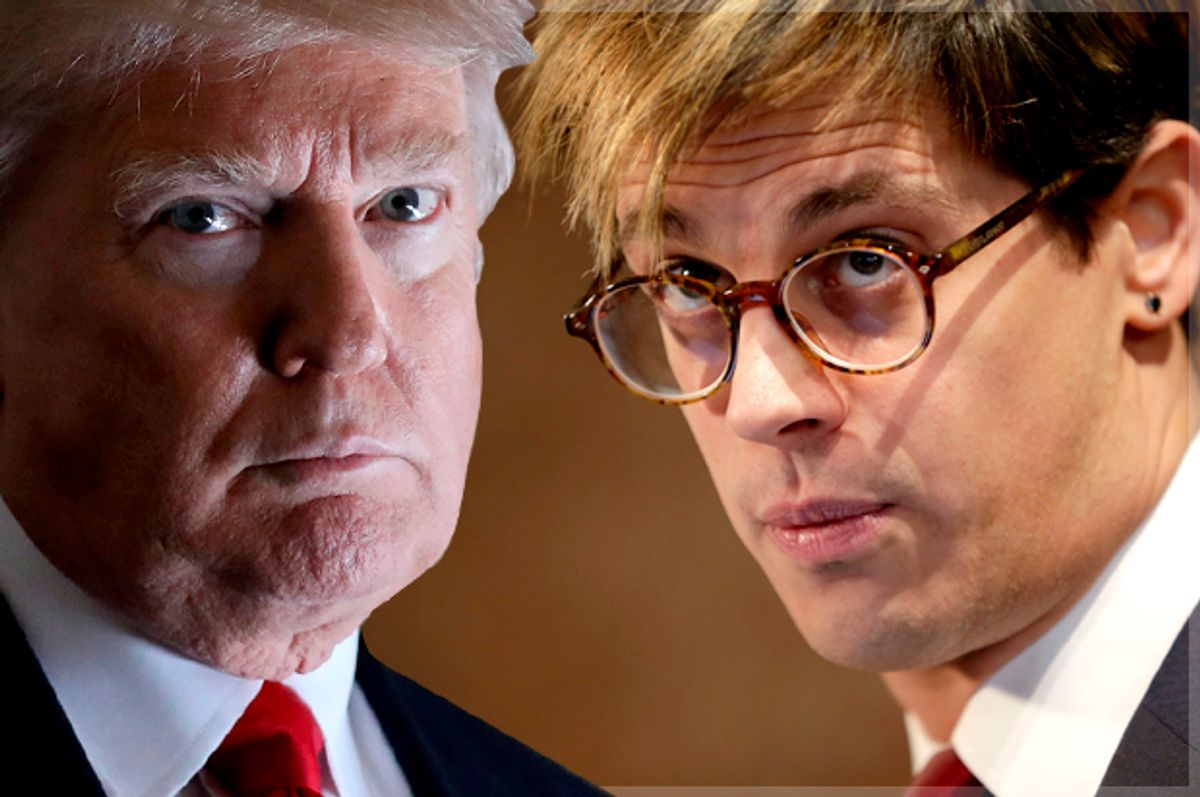 Everybody loves free speech until they don’t. The exact opposite is the case with “deplatforming,” which is what recently happened to former Breitbart editor and professional troll Milo Yiannopoulos. He was originally scheduled to speak this week at the Conservative Political Action Conference but saw his invitation rescinded after videos resurfaced in which he appeared to defend pedophilia. Shortly after CPAC’s decision, Simon and Schuster cancelled Milo’s $250,000 book deal and he resigned from Breitbart, whose editor-in-chief called Milo’s comments “absolutely indefensible.”

In the offending video, Yiannopoulos jokes that he learned how to perform certain sex acts from his Catholic priest (to whom he’s grateful). But let’s be clear: This isn’t the first time Yiannopoulos has made such remarks. For example, during a college talk last year he said this about himself: “I know what you’re thinking. If every priest looked like this, those little boys would stop complaining.” In a podcast appearance, host Joe Rogan brought up the supposed tradition in Papua New Guinea of “men who take these young boys and inseminate them, and put cum in their mouths and their asses to make them grow.” To which Yiannopoulos responded, “Sounds like homosexuality. Sounds great.”

So it turns out that Republicans are morally fine with, say, Donald Trump bragging about sexually assaulting women in the crudest language possible, as well as going backstage at beauty pageants to see women getting dressed. Nor do Republicans have a problem with Trump's saying that Mexico is sending its “criminals” and “rapists” to the United States. They also don't have a problem with Trump’s comments about a Mexican judge, which House Speaker Paul Ryan described as “sort of like the textbook definition of a racist comment.”

But when it comes to ostensibly pro-pedophilia comments from a C-list “Internet supervillain,” the line must be drawn.

Why? I suspect it’s because the "moral badness" of pedophilia, as philosophers would put it, is relatively easy to understand. One need not be the victim of a pedophile to grasp why such acts are morally abominable.

Unfortunately, this is not the case with a wide range of other immoral actions, including “hate speech,” of which Milo has become the most lionized contemporary champion. Is it really a surprise that the most vocal supporters of allowing hate speech in the name of free speech are white men? After all, this demographic is the least likely to ever experience verbal assaults based on gender identity or skin color. As Louis C.K. once quipped, “I’m a white man. You can’t even hurt my feelings. What can you really call a white man that really digs deep? ‘Hey, cracker!’ ‘Oh, ruined my day!’”

The First Amendment provides no exceptions for hate speech, although many European countries proscribe certain kinds of hateful expression, making the U.S. an anomaly in this respect. While Yiannopoulos has repeatedly argued that words are not weapons and thus cannot cause harm, many psychological studies show this to be empirically false. Children who are verbally bullied end up with psychiatric problems and even neurological abnormalities. Hostile workplace environments can cause “debilitating anxiety, panic attacks, clinical depression . . . and even post-traumatic stress,” according to the Workplace Bullying Institute. Chronic high levels of stress hormones can lead to a range of health problems, including cognitive impairment. Furthermore, psychological injury is often worse than physical injury because it’s more difficult to overcome.

So, no, “fuck your feelings” is not an enlightened statement.

It follows then that if the ultimate goal of public policy is to implement laws that maximize human flourishing, happiness and productivity, one can reasonably argue that certain forms of hate speech should not be free. Insofar as they cause genuine harm, they should be appropriately regulated. One of the most influential liberal thinkers, John Stuart Mill, appeared to agree when he said “there are many acts which . . . if done publicly, are a violation of good manners and, coming thus within the category of offenses against others, may rightfully be prohibited.”

Mill added, “Acts of whatever kind, which, without justifiable cause, do harm to others, may be, and in the more important cases absolutely require to be, controlled by the unfavourable sentiments, and, when needful, by the active interference of mankind. The liberty of the individual must be thus far limited; he must not make himself a nuisance.”

Just as we have laws that restrict individual liberty for the greater good — for example, the state imposes penalties for committing murder — so, too, should we have some limits on speech. This, in fact, is already the case: The Supreme Court has ruled that many forms of expression, such as shouting “fire” in a crowded theater or possessing child pornography, are not protected by the First Amendment. Why? Because speech of this sort has real, measurable, bad consequences for society — consequences that civilized nations ought to prevent.

As the aforementioned psychological studies show, certain kinds of language can have bad consequences as well. So, one might ask, what’s the difference? Perhaps we should say the following: Restrictions on speech, including hate speech, are in principle acceptable, but only if such restrictions can be morally justified, since all forms of authority must always be justified. In other words, the burden of proof is on those who would like to impose speech restrictions. The question thus becomes, “Are there any good moral arguments, grounded in empirical facts, for restricting certain kinds of hate speech?” And the answer appears to be “It sure seems so.”

One might object that this could open the door to Big Government restricting more and more types of speech until this freedom — a fundamental pillar of democratic states — has completely eroded. But this argument is unconvincing: Few would maintain that limitations on defamation, for example, constitute a slippery-slope threat to the First Amendment, even if there are real questions about what exactly counts as defamation. So why would rules prohibiting hate speech constitute a more serious threat?

Many philosophers have defended a variety of speech restrictions on moral or ethical grounds. For example, Stanley Fish argues that free speech is a value that must be weighed against other democratic values, with which it is sometimes in tension. Consequently, one must not be a fundamentalist about free speech as a principle that applies, no matter what, in all possible contexts. Rather, we should seek a “balance” according to which we "consider in every case what is at stake and what are the risks and gains of alternative courses of action.” There are cases in which free speech could undermine cherished democratic values, such as the equality of all people..

Added Fish: “I am persuaded that at the present moment, right now, the risk of not attending to hate speech is greater than the risk that by regulating it we will deprive ourselves of valuable voices and insights or slide down the slippery slope towards tyranny.” That essay was published in 1994 but seems no less applicable today, and perhaps more so.

Furthermore, the philosopher Karl Popper famously claimed that a maximally tolerant society will contain the seeds of its own destruction. As he put it, “If we extend unlimited tolerance even to those who are intolerant, if we are not prepared to defend a tolerant society against the onslaught of the intolerant, then the tolerant will be destroyed, and tolerance with them.”

Social theorist John Rawls echoed this sentiment when he wrote, “While an intolerant sect does not itself have title to complain of intolerance, its freedom should be restricted only when the tolerant sincerely and with reason believe that their own security and that of the institutions of liberty are in danger.”

Our institutions of liberty are clearly under threat by the alt-right and its authoritarian leader, Trump. Consider the president’s ongoing campaign to delegitimize the free press by calling it the “opposition party” and the “enemy of the American people,” joking about killing journalists, referring to them as “scum” and promising to expand libel laws so the government can sue news outlets that publish unfavorable articles. The Trump presidency constitutes a genuine danger to the free press and therefore democracy itself, as intellectuals from Steven Pinker to David Frum have convincingly argued.

It is encouraging to see Republicans and conservatives finally stand up to the moral rot that has made Milo Yiannopoulos famous. Perhaps with an expanded circle of empathy — one that reaches beyond victims of pedophile abuse to include trans people, lesbians and gays, women and minorities — conservatives will begin to recognize just how harmful unfettered hate speech can be.