Trump's stale CPAC ramble: Another airing of old grievances — that left the right-wing audience in rapture 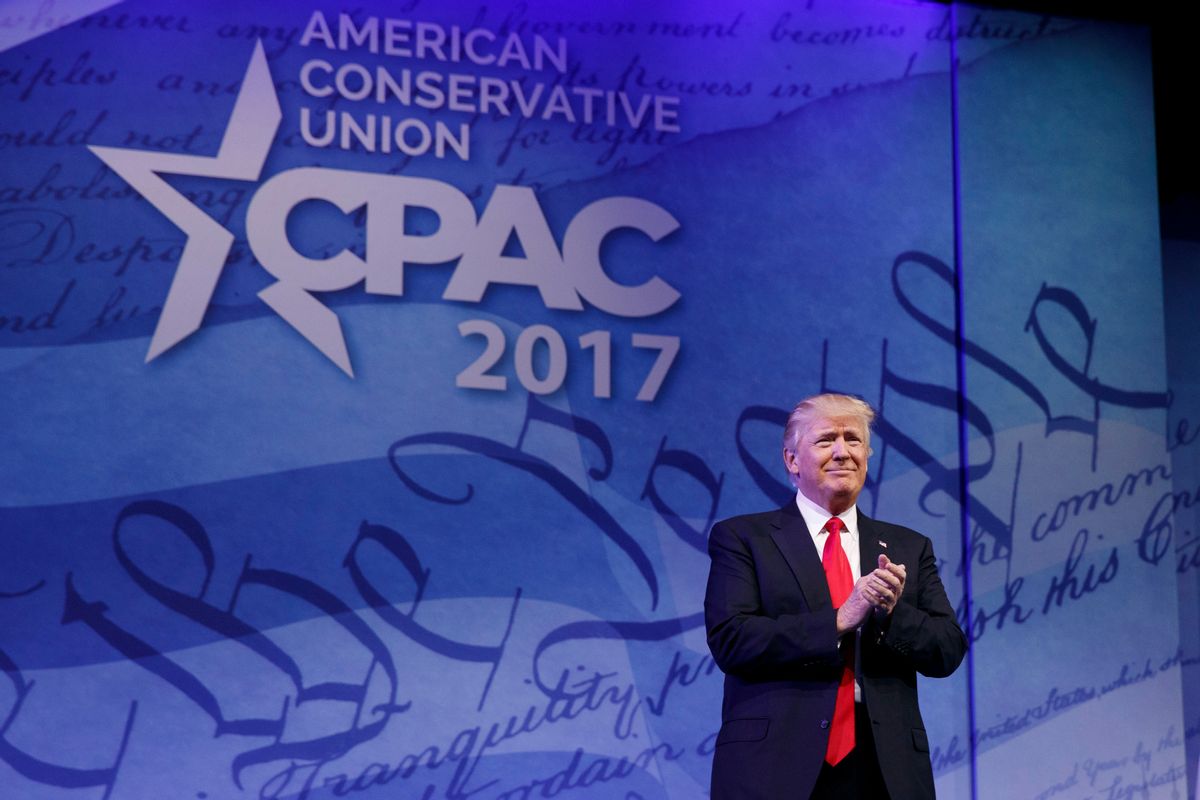 President Donald Trump showed up at the Conservative Political Action Conference today and gave the one speech he always gives. Even if you’ve only paid intermittent attention to politics, you’re likely familiar with the one Trump speech: the rambling asides, relentless self-aggrandizement, generous peppering of applause lines, still more self-aggrandizement and vituperative attacks on the domestic enemy of the moment (the media). During the 2016 campaign Trump figured out what he needed to say to make a Republican political audience applaud him, and he hasn’t deviated from that formula since.

When explaining what he plans to do with the authority he supposedly earned on Election Day, Trump stayed within the comfort zone of a flamboyant braggart with no real policy knowledge: He served up a stale menu of right-wing talking points liberally spiced with superlatives and invective. He called the Affordable Care Act a “failed health care law that threatens our medical system with absolute and total catastrophe.” As for what he intends to do about this “catastrophe,” Trump said only that “we’re going to make it much better.”

For those of us outside the bubble of CPAC and Trumpism, Trump's one and only speech is quite dull by this point. Even the portions that are meant to provoke outrage, like his attacks on the media, are hard to get too worked up over. But the CPAC audience ate it up. Trump’s threats against the press were greeted with lusty applause. His mention of Hillary Clinton’s name touched off a “lock her up!” chant.

While it’s tempting to say that this is a sign that Trump has conquered the conservative movement, that’s not quite accurate. All Trump has done is skate to where the puck was already going. CPAC has long been a preening ground for the cranks, performance artists and bomb-throwers who figured out that popularity in right-wing politics demands little more than being outlandishly opposed to liberals, undocumented immigrants or other enemies of the movement.

The absurd own-goal CPAC’s organizers scored against themselves this year by inviting Milo Yiannopoulos to speak is a fine example of this phenomenon. Yiannopoulos, an alt-right provocateur who spouts loathsome opinions so he can gain publicity for being denounced, secured a slot at CPAC (and a sympathetic tweet from Donald Trump) for no other reason than having one of his speaking engagements canceled after violent protests by UC Berkeley students.

Yiannopoulos made liberals mad; therefore he was an acceptable CPAC invitee. “Milo has exposed their liberal thuggery and we think free speech includes hearing Milo’s important perspective,” one of CPAC’s organizers said by way of justifying the invitation. Then controversy erupted as video emerged of Yiannopoulos defending pedophilia, and CPAC’s organizers were ensnared by their own idiotic definition of “free speech.” Yiannopoulos was quickly disinvited.

But while Milo got the boot, Donald Trump knocked CPAC dead by doing little more than sprinkling a few right-wing bromides in between his discursive attacks on the approved list of conservatism’s enemies. This dynamic is not new, and Donald Trump didn't create it. He has, however, managed to ride it much further than any CPAC attendee before him.