WATCH: Bill Maher tells the media that it's time to earn the public's respect

Maher has a rule for the media: It's time to press back 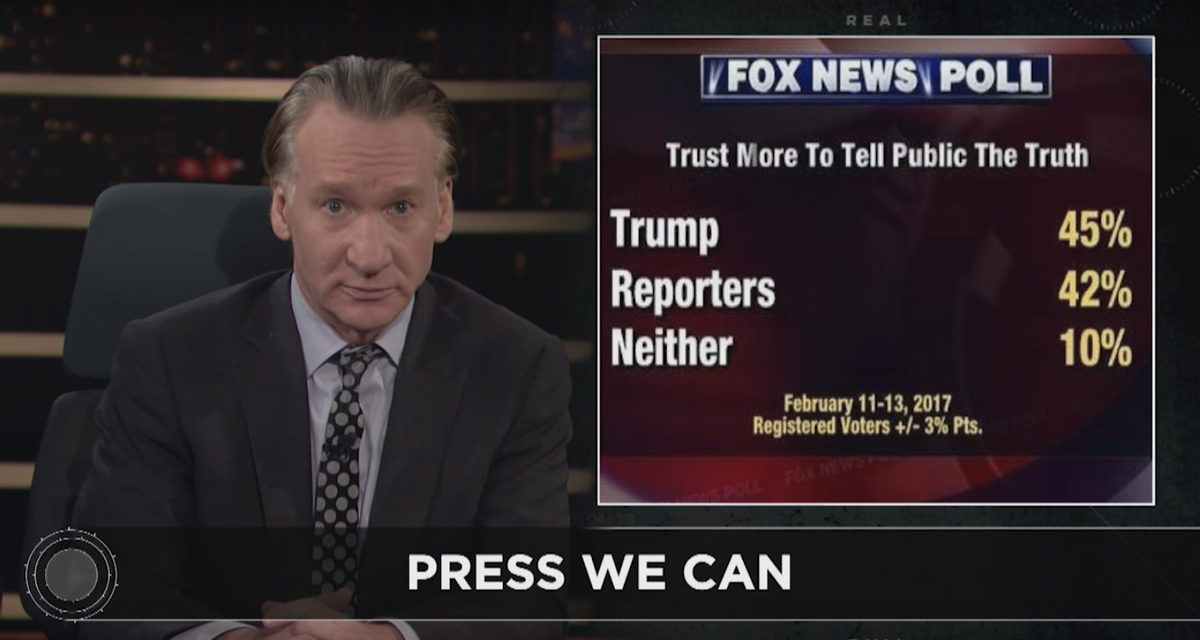 The media has had a rough year or so. After following around then-candidate Donald Trump, and giving him one of the largest platforms one could possibly imagine, the media finds itself made the enemy of the president, and untrusted by the public, according to some polls.

"Now that polls show that the public finds the news media less trustworthy than Donald Trump, they have to fight to get their reputation back," Bill Maher said during Friday night's "Real Time with Bill Maher."

"For the press to be effective, these numbers have to change," Maher said. "Can you imagine how this must make a reporter feel? To be losing a truthfulness contest to Donald Trump? It's like losing a rap battle to Mitt Romney. You can be made at me to 'giving a platform' to Milo, But Donald Trump is the apotheosis of the alt-right and the media gave him the biggest platform ever.

"They covered every rally like we put a game show on the moon.  They made him look like he was president before he was. Even during the primaries, Donald Trump got three times the coverage of the rest of the field. Although Marco Rubio was able to break through one week because he gave a very important speech about how Trump had a small cock."

Maher said that the press has fallen into the problem of finding news to fit the least-common-denominator, or, as he put it, "The news media lost trust because they became eyeball-chasing click-bait whores, who bumped the stories about climate change for ones about grizzly bears and the Jacuzzi." He showed that, although the New York Times said on their front page that Trump lied, and although Kellyanne Conway was grilled on "alternative facts," the nightly network news is filled with stories seemingly unimportant topics, like hugs, a 78-year-old weightlifter, a unicorn sighting and a panda.

"Trump has the White House, he has Congress, he has a crazy loyal fan base," Maher said. "What do we have? Pussy hats. But we also have people under them. There is something about getting in the street that makes a powerful statement that we care, that we're not afraid and that we feel so strongly we're willing to use a port-o-potty."