What's the one great movie in this year's Oscar race? It has a hairy Bulgarian monster, and you haven't seen it

I swear, I'm not trolling: The bizarre and hilarious "Toni Erdmann" is a comic odyssey through late capitalism 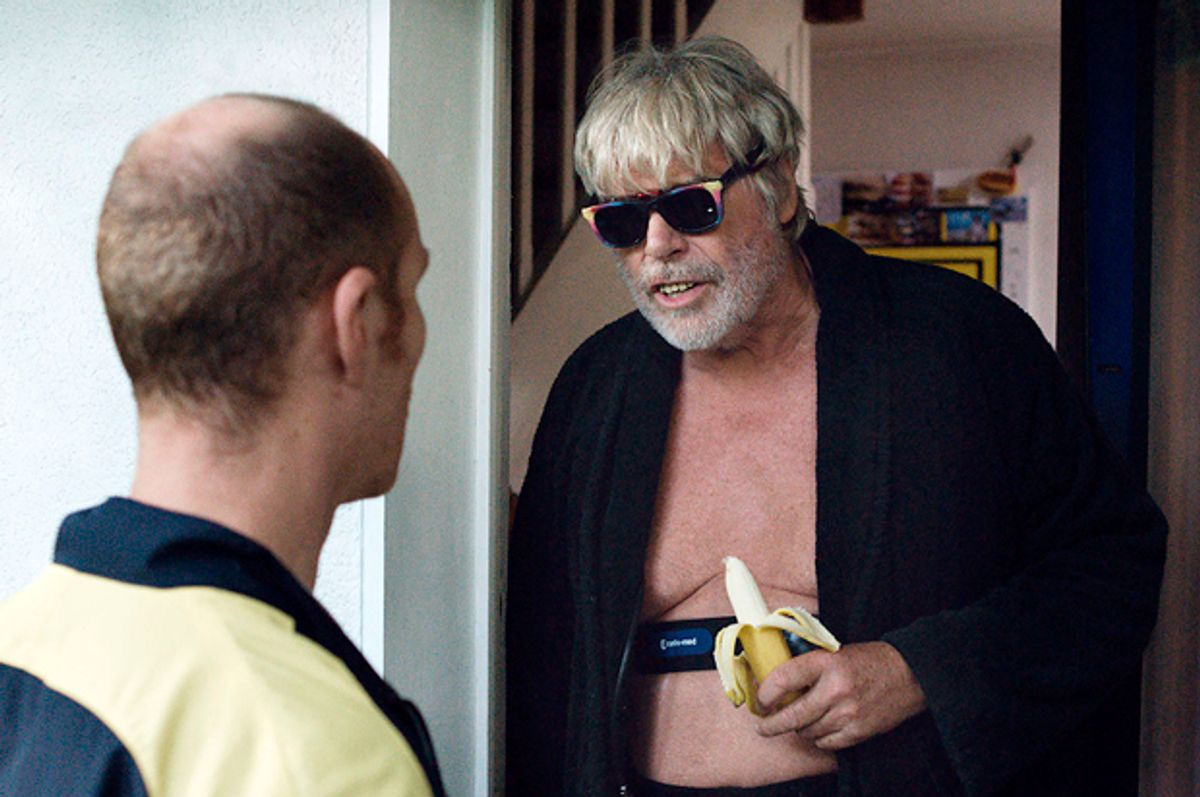 All the movies nominated for Oscars this year were made before You Know Who became president of the United States, but in that curious cultural kismet that so often pertains, many of them seem to speak to the present moment. There’s no shortage of social relevance to be found among this year’s roster of nominees, starting with the fact that Oscar is #notsodoggonewhite this time around.

“Hidden Figures” and “Fences” represent important Hollywood milestones, not because those films rooted in African-American cultural history couldn’t have been made in an earlier era but because they wouldn’t have been made at that level of industry prestige, or met with the same level of success. Barry Jenkins’ “Moonlight,” a gorgeous and intricately worked piece of visual and aural poetry — and the American independent film of the year — is a movie that could barely have found an audience outside the festival circuit even a decade ago, and never before could have been a significant Oscar contender.

Three of the five Oscar-nominated documentaries, as I’ve previously discussed, were made by black filmmakers about black subject matter. Furthermore, each is outstanding in a completely different vein: While I would argue that Ezra Edelman’s multi-part epic “O.J.: Made in America” may be the greatest single accomplishment in the long American tradition of documentary journalism (and will probably take the prize), you can’t really compare it to Ava DuVernay’s angry historical investigation “13th” or Raoul Peck’s impressionistic James Baldwin portrait “I Am Not Your Negro.”

Even “La La Land,” the much-debated musical by Damien Chazelle that is likely to be the big winner on Sunday night, has a peculiar political resonance. If it strikes some viewers now as a lily-white appeal to nostalgia or an overt attempt to escape from painful reality, that perception is loaded with unintentional irony: It’s partly true and also deeply unfair. Chazelle is a meticulous formalist and a deep student of music, film and drama, who is trying to recover and Americanize a European tradition — specifically, the tradition of Jacques Demy’s classic musical “The Umbrellas of Cherbourg” — that is entirely unknown to most contemporary viewers. As a film artist, he has a lot more in common with “Moonlight” director Barry Jenkins than it may appear; I can say with high confidence that they admire each other’s work and that Chazelle is not some closet Trumpian, working to make the movies white again.

But I’m here to make the borderline heretical case that the one truly great film among this year’s Oscar contenders — the one that embodies the highest level of cinematic achievement, the greatest political and social relevance (even if it’s largely covert) and the most surprising insights into the human condition, circa 2016 — is none of those listed above. Not that many people have seen it and it won’t win anything on Sunday night. It’s “Hacksaw Ridge”! No wait, I’m kidding, although that is definitely the winner of the annual “American Sniper” award as best picture in the red states. It’s “Moana”! Still kidding, though the songs are pretty good.

Actually, it’s “Toni Erdmann,” a foreign-language nominee by German director Maren Ade that didn’t reach American theaters until Christmas Day and will shortly be available on home video. If you said “Toni who?” and mentally turned the page back to Outrage of the Day, you are definitely not alone. This movie is the definition of a tough sell: It runs two hours and 40 minutes, it’s in German (at least the parts that aren’t in Romanian, or bad corporate-speak English), it has no name actors or recognizable faces and it isn’t about Beethoven or Goethe or Hitler or some other charismatic figure from the past. There’s no sex, which in years gone by was a major reason Americans went to see European movies. (Actually, there’s a little sex; it’s really, really bad sex, involving the Romanian equivalent of cupcakes.) The title conveys no information, and may even be slightly disheartening: It’s a movie about some guy.

Well, yeah, it is. It’s a strange, rambling tale of light and darkness, which seems kind of pointless at first and then turns hilarious, tragic and profound. It’s about some guy. He’s a cantankerous German retiree who invents a ludicrous alter ego — yes, that would be “Toni Erdmann” — in an overtly pathetic attempt to reconnect with his workaholic adult daughter. That’s an unmistakably familiar comic premise, familiar enough that an American remake is already in development, which supposedly will star Jack Nicholson and Kristen Wiig. That’s perfect casting, good enough to raise the possibility that whoever Paramount Pictures enlists to write and direct the remake won’t totally screw it up.

Don’t be fooled. I have five words of advice about why you should seek out the real “Toni Erdmann” as soon as possible, and not wait around for the friendlier, shorter and more “accessible” Hollywood version. Those words are “Let the Right One In.” (They could actually also be “The Girl with the Dragon Tattoo,” although by my count that’s six words.) How many people in the dorm-room, group-household cult surrounding Swedish director Tomas Alfredson’s 2008 tween-vampire classic even noticed or cared that an English-language remake (Matt Reeves’ “Let Me In”) followed two years later? And the remake wasn’t even terrible! It made a sincere effort to translate the spirit and tone of the original without slavish mimicry, but it couldn’t get around the fact that the specific European and Scandinavian quality of “Let the Right One In” was more than a setting. It was also about theme and tone and story and identity. It was central to the soul of the work, and that’s at least as true of “Toni Erdmann.”

First of all, no filmmaker in his or her right mind — in Germany or America or anywhere else — would make a wry, whimsical father-daughter comedy that runs 162 minutes. But Ade, a 40-year-old woman who has directed two previous features, has done just that, which suggests that isn’t an adequate description. It might be pretentious film-critic speak to claim that “Toni Erdmann” is not really a story about an elderly crackpot and his corporate-fembot daughter but something closer to a story about the condition of the human soul under capitalism. But I think that’s entirely accurate, and moreover it’s a story that builds up from within the movie, organically, without announcing itself and without some prescriptive ideological agenda.

No American film would allow the awkward Bucharest cocktail parties and tense business meetings to go on as long as they do; no American film would ever conceive of the scene when Toni wanders off into the woods, partly because he’s just gotten an oil-field worker fired, and partly because he has to take a dump. If “Toni Erdmann” is a story about capitalism, it’s shaped by the strange and specific quality of European capitalism, where the long, slow decay of social democracy collides with the remnants of ancient folk culture, aristocratic high culture and an imported corporate ruthlessness that sometimes seeks to outdo the American version.

The central character, whose real name is Winfried (played by the magnificent German stage actor Peter Simonischek), presumably has the freedom to follow his daughter, Ines (Sandra Hüller), to Bucharest and play-act his idiotic new identity as a flamboyant “lifestyle coach” with bad teeth and a 1970s rock-star wig because of the generous benefits provided to seniors by the German state. Ines, meanwhile, is making outrageous bank but has no life as a harried executive at some diabolical consulting firm that convinces companies (in Romania!) to “modernize” their operations by downsizing and outsourcing and firing as many people as possible.

That setup could easily veer into stereotype, am I right? You can almost taste the sugary, heartwarming Hollywood climax. But “Toni Erdmann” is never a simplistic or moralistic yarn about how Ines works too hard and can’t enjoy life and is redeemed by the zany if embarrassing soulfulness of her dad. One of the reasons the movie is so long is that each of Ade’s scenes takes its time to go off in some unexpected and surprising direction, and so do all her characters.

Even Ines’ unctuous boss, an “Office Space”-worthy corporate tool played by Thomas Loibl, ultimately reveals moments of vulnerability, as does her co-worker and lover Tim (Trystan Pütter), the individual implicated in the aforementioned cupcake sex. There are a few justifiably famous scenes in “Toni Erdmann,” including Ines’ impromptu decision to host a cocktail party without getting dressed first, and the Bulgarian “hairy monster” costume worn by Winfried/Toni for their climactic reunion. (I don’t even want to bring up Ines’ performance of “The Greatest Love of All,” but I guess I just did.)

But you can’t pull any of those things out of context as hilarious surrealism, the way a 21st-century American comedy will inevitably do, and have them work the same way. They’re funny not because they’re funny, but also because they come from the profound lived experience of a people, a nation and a continent struggling to make sense of incomprehensible change. “Toni Erdmann” isn’t about Donald Whatever-His-Face, or about Angela Merkel either. It isn’t about immigration or trade or racism.

But it might be about greed and love and the fact that they can never completely be disentangled, which means it’s about all those other things too. It’s about the fact that we never quite forgive people we love for hurting us, and we’re never quite able to learn the right lessons from new experiences. But we keep on trying as long as we’re here, and sometimes the results can be amazing.