Tom Brady can be more than a historically great athlete 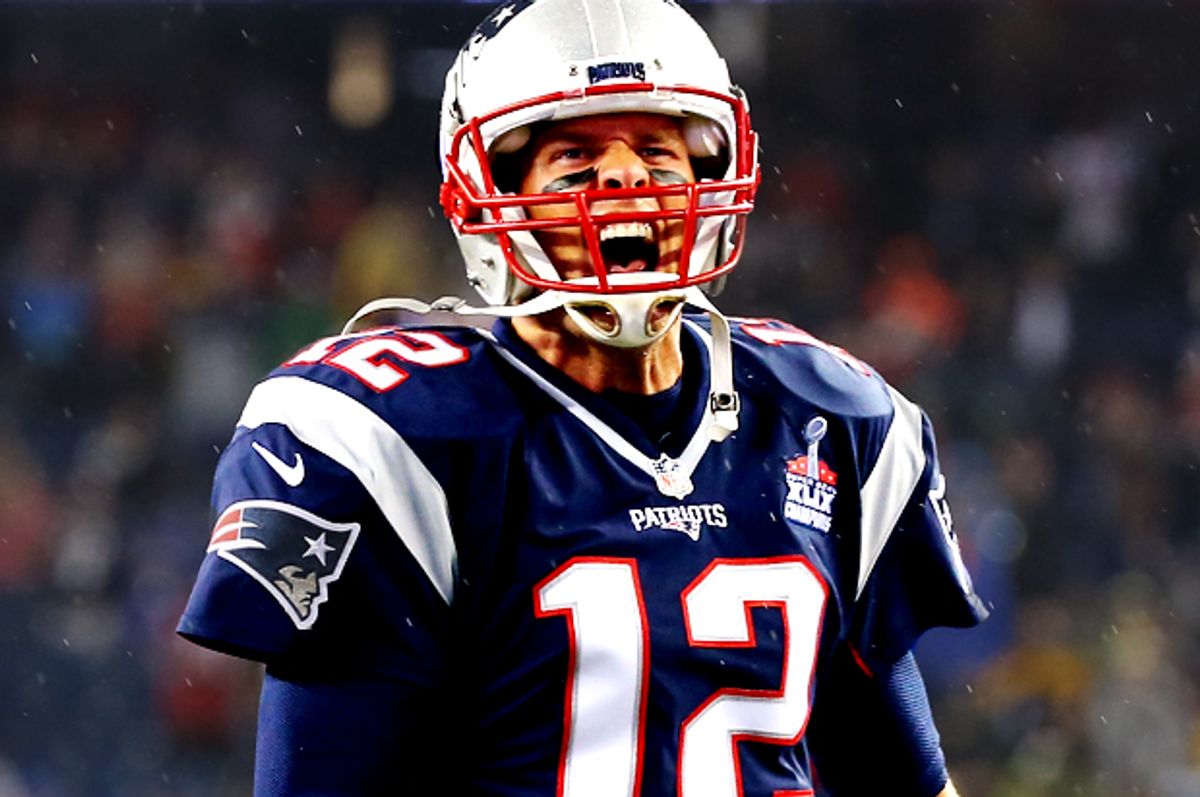 When the New England Patriots won the Super Bowl earlier this month, Tom Brady sealed the deal. The win marked Brady’s fifth title, a record for quarterbacks; and when he was named the game’s MVP, it was his fourth time winning the award, a record for all players. There is no longer a debate: Tom Brady is the greatest quarterback of all time; he is the greatest football player of all time; he is on professional athletes' Mount Rushmore.

As if that weren’t enough, Tom Brady is insanely handsome; Tom Brady is married to an insanely beautiful supermodel. And the two of them are insanely wealthy.

In football, nothing. Tom Brady will come back next season to compete with the future, to move up the little duck on the GOAT stadiometer a few centimeters so that it’s that much harder for some 10-year-old phenom to reach in 30 years.

In life, not much. Brady has achieved more than most people dare dream about. And in so doing he has, but for a few underinflated footballs, been a positive role model and source of inspiration for children, as well as a source of unbridled joy for the people of New England. Brady has performed plenty of philanthropic work, too. While those things matter, they come with the territory. When you’ve been blessed the way Tom Brady has been blessed, there is a certain obligation to do such things. What’s left for Tom Brady in life is doing the thing that he doesn’t have to do, exercising the power of his status for the good of the world, transcending the ranks of great sports figures and entering the ranks of great historical figures.

It is rare for stature and circumstance to conspire in a way so an athlete has that opportunity. And it is even rarer for such an athlete to make the most of the given opportunity. There’s Jackie Robinson and the color barrier, Muhammad Ali and Vietnam, Bill Russell and the fight for civil rights, Tommie Smith and John Carlos raising their fists at the ’68 Olympics, Billie Jean King and women’s equality.

Those transcendent moments all came prior to the 1980s. The battles were bigger then and the shoe deals smaller. With Michael Jordan came the athlete-as-capitalist ethic, the idea that political engagement only polarizes and polarization is bad for sponsorships. Tom Brady is one of the last vestiges of the post-Jordan era, an era haunted by that ideal. The biggest athletes of that era — Derek Jeter, Alex Rodriguez, Tiger Woods, Kobe Bryant, Tim Duncan, Peyton Manning as well as Tom Brady — were all consummate calculators. Woods, for instance, had an opportunity to make a stand for gender equality by protesting the 2002 Masters Tournament at Augusta National Golf Club, which was closed to women. He didn’t take it.

The times have changed. The next generation of athletes — beginning, I would say, with LeBron James — is more willing to engage. Perhaps that’s because of the demand and the example social media creates. Perhaps it’s because the issues have reacquired a certain weight or maybe it’s simply because of the composition of the new era of stars. James has orchestrated small statements of solidarity, such as in the wake of Trayvon Martin’s death, when the Miami Heat took a hoodie-clad photo. Carmelo Anthony has encouraged athletes to use their voices to highlight important issues. And lesser athletes have gone further — most notably, Colin Kaepernick, who knelt during the playing of the national anthem last season.

There is, of course, no requirement for an athlete to become political. Most fans would prefer that players stick to sports. Being able to dunk a basketball or hit a 100 mph fastball doesn’t necessarily qualify a person to have an informed opinion about whether the education department should spearhead a voucher system or whether the federal government should increase automobile tariffs. Brady has said he would never get into politics because “half the people are gonna like you and half the people are not gonna like you, no matter what you do or what you say." He added, "It’s like there are no right answers. If there were, everyone would choose the right answers. They’re all opinions.”

But the current moment is bigger than politics, bigger than ideology. America’s president is trying to undermine American democracy, limit constitutional liberties, discriminate based on religion and muddy the waters of truth. He has repeatedly said things that are offensive to minorities and women. He has begun to tarnish America's relations with allies. These are nonpartisan facts. How you feel about them is an opinion.

So Tom Brady must ask himself that question: How does he feel about what America’s president is doing? Because Tom Brady has an opportunity that is rare for athletes. As Super Bowl champions, the Patriots will visit the White House this spring. A few of Brady’s teammates are boycotting the visit. It isn’t uncommon for athletes to decline to attend a White House invitation, as Brady did in 2015. But because Donald Trump is a friend of Tom Brady, and in view of the current political situation’s magnitude and Brady’s stature, if he were to join his teammates in their boycott, it would send a powerful message. Brady would be standing up for interests that are bigger than his own.

The decision of whether he should attend the event has been framed by some as a lose-lose. Whether Brady chooses to go or not, the decision will be perceived as a political statement and it will anger some fans. But that framing misses the judgment of history. Brady may take a short-term hit either way, but if he boycotts the visit he will be widely lionized for doing so years from now. And what would he be risking, really? A few angry football fans is nothing compared to what someone like Muhammad Ali risked when he refused to serve in the Vietnam War.

In interviews, Brady has indicated that  he will attend the White House reception. But the visit is still a few months away. There’s time to look down the field and call an audible. That’s how he gets a win, the glory of which would last longer than that from any game.