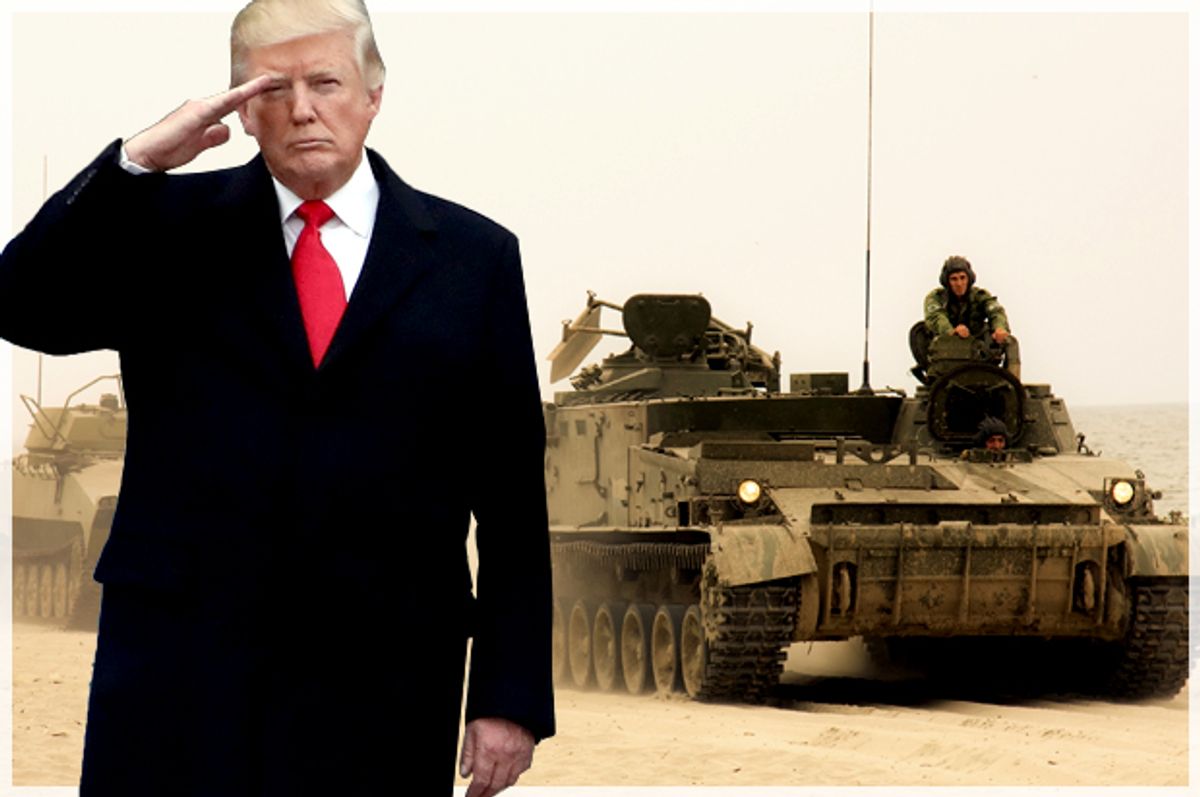 President Donald Trump is his own worst enemy. Whenever we see him lashing out at critics, be they news anchors or celebrities, he’s never really damaging the reputation of anyone other than himself. What we’ve witnessed so many times since June 2015, and certainly before then as well, is a man without an internal censor. Often people who don’t know what they’re going to say until they say it are people who have tasked themselves with being professional provocateurs. Howard Stern, for example, has made a killer living for himself by short-circuiting the part of his brain that tells him, Don’t say that! Anything but that!

Trump is similar, though his process doesn’t appear to be deliberate. He simply can’t help himself. For example, it’s not entirely a matter of honesty when he says something like “the leaks are real but the reporting is fake.” He’s blurting something that is accidentally honest (the part about the leaks being real) even though he didn’t intend to. If Trump were just in celebrity game-show host mode, it wouldn’t be a problem. Now that he somehow got himself president, though, with all of the accompanying expectations and responsibilities, his spontaneous verbal unspoolings come off as disengaged at best and globally dangerous at worst.

Regarding the latter, Trump recited prepared remarks about his budget proposal on Monday morning during a meeting at the White House with state governors. But as always, he took wild detours during the speech, veering off into word-salad territory: his usual cocktail of self-interruptions and glitchy-sounding repetitions of superlative boasts.

Except this time he indulged himself in a digression about the U.S. military and America’s recent record on warfare. His people seriously need to rein him in on this topic (and many others for that matter). After all, in past remarks about this topic, he’s veered into both vague and not-so-vague threats about nuclear weapons or preferring war heroes who “weren’t captured.” This latest episode was no different.

Trump began by using the troops as a selling point for greatly augmenting military spending, “We must ensure that our courageous servicemen and women have the tools they can be [sic] to deter war, and when called upon to fight in our name, only do one thing: Win.” Fine.

Donald Trump knows nothing. If he actually read things, he’d know that we definitely lost the War of 1812, which involved his erratic hero Andrew Jackson. He should also know that the southern half of America lost the Civil War. If he read things and studied history beyond what he overhears on Fox News Channel, he’d know that “winning wars again” isn’t just about spending vast sums of money. It’s about rewinding the clock back to a time when America didn’t fight wars without universal citizen sacrifice and a nationwide mobilization of industry and volunteerism.

Additionally, the wars of the past that Trump was most likely referencing were often won with mass casualties. In World War II, American military deaths numbered 405,399; in World War I, 116,516. The Civil War had 618,000. Are you ready for these numbers again, Trumpers? If he’s ramping up for an old-school war that we’re certain to win, he has a responsibility to be forthright with the people who’ll be supplying the bodies —that tens of thousands of those bodies, if not hundreds of thousands, won't be coming home.

Furthermore, the president needs to prepare his fanboys and wealthy supporters alike for major tax hikes on the rich to help pay for the war, as previous commanders in chief have done in the past. That's in addition to preparing the fiscal hawks in both parties for the crippling debt that is usually incurred during total wars.

If Trump wants to wage war, he needs to be prepared with a stated plan to present to the American people. No “secret plans” like his nonexistent plan to defeat ISIS, which ended up being nothing more than a proposal to ask the generals for a plan. If he wants to win, then he needs to orchestrate more than just new spending. If Trump’s goal is to prepare for and fight all new wars — battles that we will somehow “win” in a universe featuring decentralized, extra-governmental terrorist groups and insurgencies blended seamlessly into populations of noncombatants — he either needs to say so or shut up about it.

And for heaven’s sake, Mr. President, read some books and briefing manuals about war. One thing’s for certain, we can’t win wars with a commander in chief who knows nothing about the cost of war, in terms of lives and treasure. Until he learns that war isn’t a casual event, aired between reverse mortgage commercials on Fox News, he’s incapable of stepping foot anywhere near a military conflict. Which means he’ll never learn. Hell, even his raid in Yemen was a mess, conducted while he was tweeting about something he saw on television. Yet he expects to be another FDR or Lincoln? That’s rich. And dangerously delusional.