Trump and his aides are so thirsty for good press that, by their own metric, they’re endangering national security 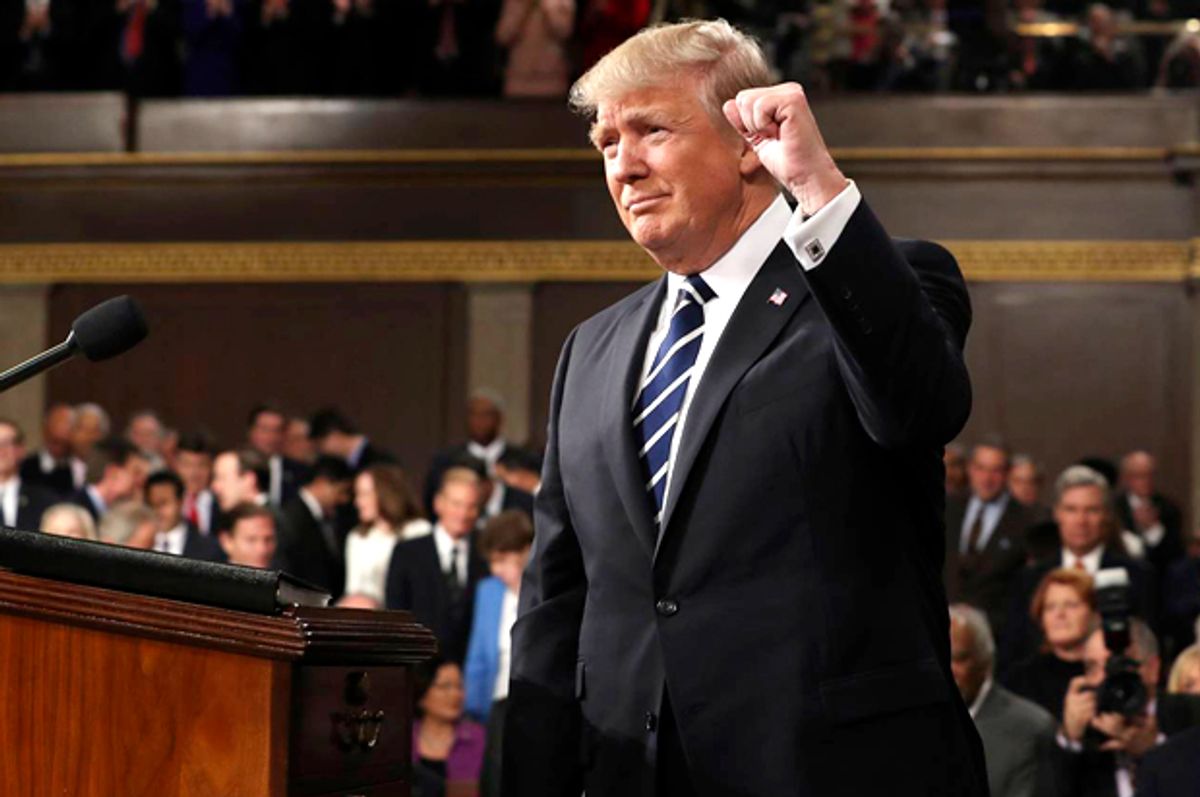 President Donald Trump gave a big speech Tuesday night before a joint session of Congress that was stuffed with lies, divorced from observable reality and a moral travesty. It was in many ways a typical Trump speech, but the president managed to bumble through it without attacking the press, floating an insane conspiracy theory or inviting a geopolitical adversary to hack his political opponents. As a reward for having barely met these rock-bottom expectations, Trump is being fulsomely praised in the media as presidential while whispers of a “new Trump” rise once again.

This celebratory outpouring was going to happen eventually. Reporters and pundits have been so eagerly searching for signs of a Trump “pivot” that all the president had to do was briefly indulge in some rote political pageantry to trigger this flood of vacuous, self-reaffirming analysis. Trump’s despicable policies haven’t changed, and his administration is still a shambolic mess steered by incompetent bunglers and dead-eyed extremists.

Speaking of those incompetents and extremists, the flood of media praise seems to have caught Trump’s people off guard, leading them to unwittingly undermine a key justification for one of their despicable policies: the travel ban on residents of specific Muslim nations.

Trump was supposed to sign a new executive order on Wednesday reissuing the travel ban after his initial order got snarled up in the federal court system. After Trump’s speech on Tuesday night, however, the White House has evidently decided to delay issuing the new order so that the president can bask in all the fawning attention he’s getting from the press. “We want the [executive order] to have its own 'moment,’” an anonymous White House official told CNN.

It’s bracing to see White House officials talk explicitly about how political considerations are driving their national security decision-making. This example is right up there with the explanation by George W. Bush's chief of staff Andy Card for why his boss waited until September 2002 to start publicly drumming up support for the Iraq invasion: “From a marketing point of view, you don’t introduce new products in August.”

Let’s travel back to the days following Trump’s signing of the first version of the travel ban. As you probably recall, much of the controversy that surrounded the original order stemmed from the fact that the White House moved with lightning speed to implement it as quickly as possible, causing nightmares for travelers detained by customs and immigration officials who had not been given any guidance on how to carry out the order.

The administration justified the order’s precipitous implementation as a matter of national security. The Justice Department defended the order before a Ninth Circuit panel by arguing that the courts had no constitutional authority to contravene the president’s power to act to safeguard the country.

Administration officials also stated explicitly that the order had to be implemented immediately because any sort of delay would have been an unacceptable national security risk. “What happens if we didn’t act and somebody was killed?” Spicer asked indignantly on MSNBC in support of the order’s implementation. “We act now to protect the future.” Trump himself warned that delaying the order allowed “people” from the banned countries to “pour in,” and that put the nation “in peril.” The administration’s case was straightforward: Trump had to act to ban travel from those countries or people could die.

One month later, the same administration is telling the press that it’s going to delay signing the new travel ban order because the politics will work better for them that way. By Sean Spicer’s reckoning, the president and the rest of the White House are actively endangering American lives for the sake of some good PR.

The unstated truth underneath all this is that the travel ban has no purpose other than to satisfy a political need for the administration. By delaying the new order, the White House is acknowledging as much and stomping all over its falsehood-laden defense of the policy because it perceives a short-term political advantage in doing so. Of course, once the favorable headlines from Trump’s speech have dissolved, administration officials will go right back to insisting that the travel ban is a critical and urgent matter of national security.