In Trump's world, progressives are the true racists and white people face endless persecution. None of this is new 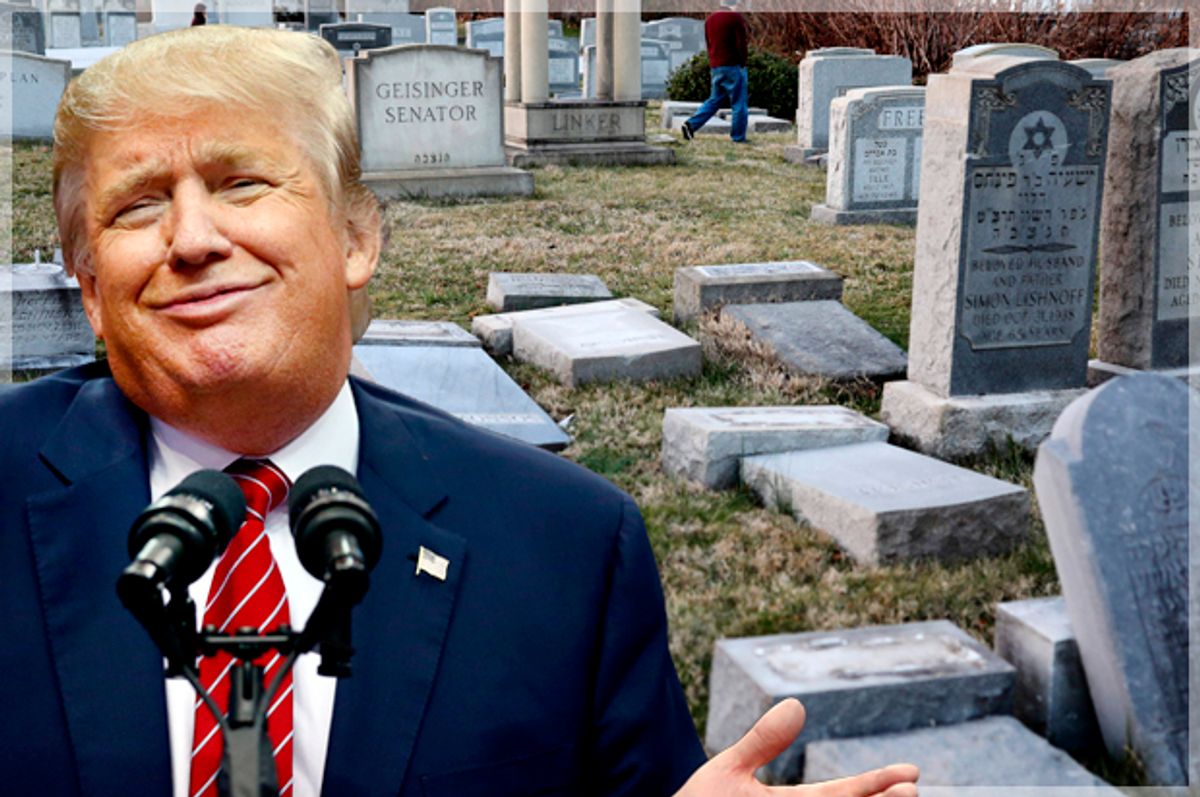 Donald Trump is a professional white victimologist. The examples are legion. Trump never takes responsibility for his actions and appears to believe in numerous fictions: News media outlets are conspiring against him, Barack Obama is trying to sabotage his presidency, the military and not the commander in chief is to blame for the recent botched raid that killed a Navy commando, the women who accused Trump of sexual assault are all lying, millions of "illegal votes" were cast against him, and the tens of millions of people who have protested his regime are all paid operatives.

Donald Trump also refuses to take responsibility for the nationwide wave of hate crimes against Muslims, Jews and people of color that his rhetoric and agenda have inspired.

Trump's voters are also white victimologists. Despite the fact that white Americans have more (unearned) political, social and economic power than members of any other group in the country, public opinion and other research has shown that Trump's white voters believe they are "oppressed" and that nonwhites receive more opportunities. (Trump's voters and Republicans en masse also believe that men, not women, are victims of sexism in America.) White victimology is also present in the deranged belief that racism against white people is as big a problem, if not bigger, than racism against African-Americans and other people of color. White conservatives are also more likely to hold such beliefs than other members of the American public.

In all, deploying white victimology is one of Donald Trump's favorite tactics, and it has a long association with the conservative movement. Trump wielded white victimology to great effect in order to win the Electoral College vote. He shows no sign of abandoning the politics of white victimology while president.

As reported by the New York Daily News on Tuesday, when Trump discussed the terrorist threats and vandalism that have recently targeted the Jewish community, he seemed to channel a conspiracy theory that the master Nazi propagandist Joseph Goebbels would have approved of:

President Trump appeared to suggest Tuesday that the wave of bomb threats against Jewish community centers across the U.S. could be coming from within the Jewish community itself, according to a Pennsylvania state lawmaker present for the comments.

Pennsylvania Attorney General Josh Shapiro, who was part of a group of state attorneys general meeting with Trump at the White House Tuesday, relayed Trump's comments about the bomb threats to Buzzfeed News, explaining that the commander-in-chief seemed to indicate he felt some of the threats were being made from the inside, as part of a potential effort "to make others look bad."

White supremacists hear echoes in Donald Trump's suggestion that Jews and others are staging these hate crimes, and have celebrated online how their "glorious leader" is now following their lead.

This is not the first time that Donald Trump has parroted anti-Semitic themes. He did so repeatedly during last year's presidential election. Given that some of Trump's most senior advisers have links to white nationalism, it would seem that "The Protocols of the Elders of Zion" is now required reading in the White House. (Some of Trump's close advisers are also Jewish, including Stephen Miller and Trump's son-in-law Jared Kushner, which admittedly clouds the picture.)

Likewise, Trump's belief that "liberals" and "Democrats" are conspiring against him (and the Republican Party) is part of a broader right-wing obsession with "false flag operations" and related conspiracy theories. There are many ugly examples of this that can be found among conservatives, going back decades. In 1963, William F. Buckley's magazine, the National Review, suggested that the Birmingham church bombing that killed four black girls was most likely the work of a "crazed negro."

White victimology also distorts reality by creating a fantasy whereby it is not conservatives who are the "real racists" but rather liberals and progressives. This trope is common across the right-wing news entertainment echo chamber. It also has standard talking points, which are easily disproved. Consider the following examples:

1. The Ku Klux Klan is a Democratic organization.

It's true that the Ku Klux Klan was founded by Southern Democrats in the aftermath of the Civil War. That Jim Crow, segregationist wing of the Democratic Party has now been fully absorbed by the Republicans. Moreover, since the civil rights movement, Klan activity in much of the South is best understood as part of white backlash against the Democratic Party and in support of the Republican Party. In its current form, the Klan is a right-wing terrorist organization that supports Republican candidates, including Donald Trump.

2. Black Lives Matter is a "hate group," much like the Klan.

Black Lives Matter is a civil rights organization and activist movement that seeks to end police brutality against African-Americans and other people. Black Lives Matter also supports public policies that respect and nurture the full humanity and dignity of all people, regardless of their skin color. Black Lives Matter does not endorse violence. It has not hurt or killed anyone. By comparison, the Ku Klux Klan and related white right-wing terrorist organizations, according to estimates, have killed at least 50,000 African-Americans from the end of the Civil War through the decline of the Klan as a national force in the latter part of the 20th century.

3. "Progressives" have always been racist against people of color.

This claim is ahistorical. White supremacy has been a fixture of American society from before the founding of the republic through to the present. The "progressive" reform movement of the late-19th and early-20th centuries was multifaceted and complex. Like other political movements, it reflected the tensions and social norms of its era. As such, many if not most of its reform organizations were racially segregated. That did not stop African-Americans and other people of color from working toward many of the same goals (women's rights, temperance, public health, public education and improved public hygiene).

Many Northern white progressives were either indifferent to or supported Jim and Jane Crow, biological racism and eugenics. Most Southern white progressives and other reformers explicitly embraced and supported white supremacy. But to draw a clear line from the progressive movement of the late-19th and early-20th century to the post-civil rights era is intellectually dishonest and historically inaccurate. On questions of the color line, racial progress, civil rights and freedom, conservatives have more in common with the racist and white supremacist social order of the past than do forward-thinking progressives and liberals who fought to tear down that system.

4. Blacks and other "minorities" are taking jobs and other opportunities away from whites through programs such as affirmative action.

On the college and university level, it is the children of alumni as well as donors who receive the most preferential treatment in admissions. This is a de facto advantage for white people over members of other groups. Whites are the largest beneficiaries of scholarships and similar programs as well. This also reproduces inequality because of the high levels of racial and economical segregation in America's public and private schools.

Donald Trump and the broader right-wing movement's white victimology and conspiracy-theory narratives have so much traction because conservatives have been trained and conditioned by their media and other leaders to believe them. This is historian and political scientist Richard Hofstadter's much-referenced "paranoid style" in action:

But the modern right wing, as Daniel Bell has put it, feels dispossessed: America has been largely taken away from them and their kind, though they are determined to try to repossess it and to prevent the final destructive act of subversion. The old American virtues have already been eaten away by cosmopolitans and intellectuals; the old competitive capitalism has been gradually undermined by socialistic and communistic schemers; the old national security and independence have been destroyed by treasonous plots, having as their most powerful agents not merely outsiders and foreigners as of old but major statesmen who are at the very centers of American power. Their predecessors had discovered conspiracies; the modern radical right finds conspiracy to be betrayal from on high.

Important changes may also be traced to the effects of the mass media. The villains of the modern right are much more vivid than those of their paranoid predecessors, much better known to the public; the literature of the paranoid style is by the same token richer and more circumstantial in personal description and personal invective.

The impact of this dynamic is revealed in the way American conservatives exist in an alternate social and political world that operates outside empirical reality on a broad range of issues from science to the economy. Contemporary conservatism — especially as manifest in the ascendancy of Trump's fascist and authoritarian movement — is a type of religion (Hofstadter's "fundamentalist mind") that runs on faith, a belief that cannot be proved by rational, empirical or scientific means.

This dynamic is enabled by right-wing media outlets that intentionally and quite effectively circulate disinformation and lies to viewers. With the acceptance of Fox News as a "mainstream" source of news information (media scholars have shown its viewers are among the least informed and that watching the network makes people less knowledgeable) and with Trump's access to conspiracy-minded websites such as Infowars and Breitbart, the president now controls his own unofficial state media. Trump will use this propaganda machine to disseminate his lies and further undermine the mainstream news media.

Ultimately, Donald Trump and the Republican Party's embrace of white victimology and conspiracy theories is but one more front in a long war waged against the truth and empirical reality.

As has been repeatedly shown by social scientists, conservatives and Republicans are more likely than liberals and Democrats to be racist, hold negative attitudes toward blacks and other people of color and exhibit what is known as "old-fashioned" racism and white supremacist views. Conservatism and racism have effectively become one and the same thing in America. Trump's election puts an exclamation point on that.

Scholar and activist W. E. B. Du Bois once observed that the "problem of the twentieth century is the problem of the color-line." It would seem that he is still right, well into the next century — just not in a way that many of us expected.