If you're looking for classes in bootstrap pulling or the biology of venereal disease, there's a school for you 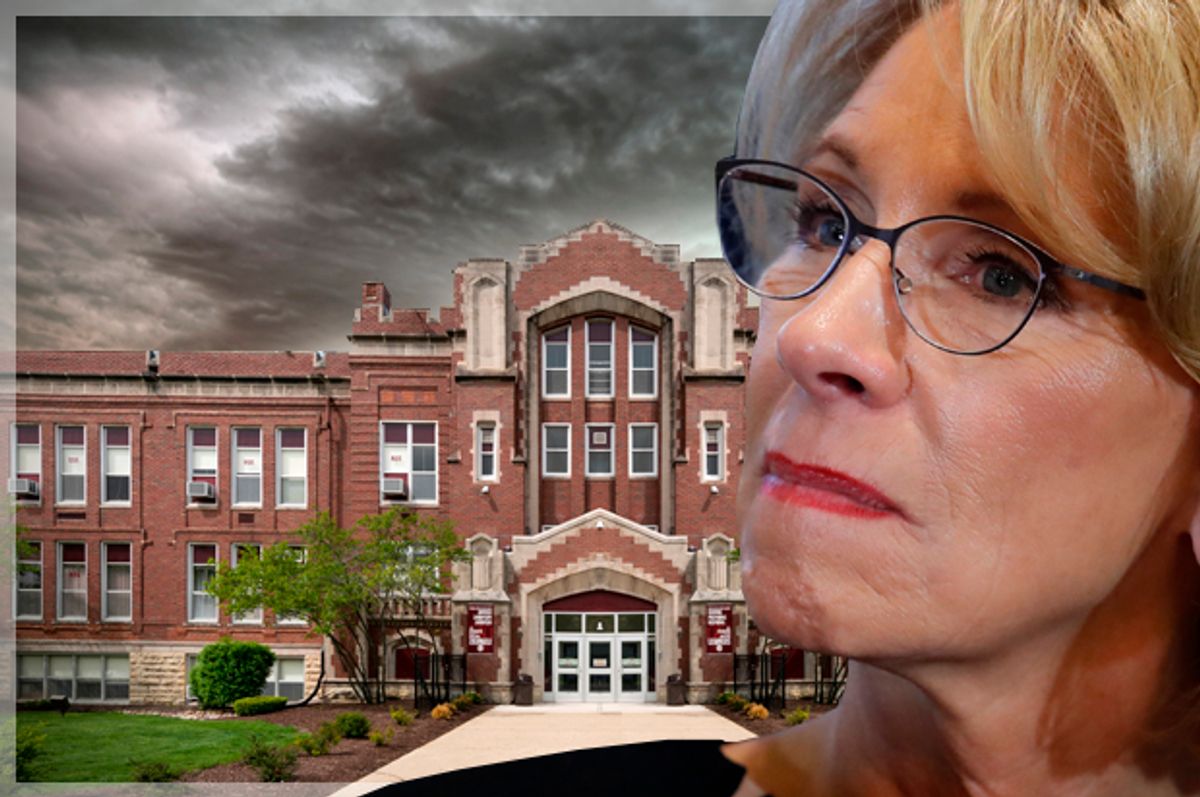 With all this talk about school choice, you might ask: What is school choice? Quite simply, as elucidated by Betsy Devos, the greatest American educator of our time, it’s the opportunity for all parents, no matter their income level or background, to choo-choo choose the right school for their children. It doesn’t matter whether or not that school is any good. What matters is the choice. By opening up American education to the free market, we will make our country semi-competitive well into the middle of the 21st century. Here’s a menu of the delicious schools already on offer.

African-American parents may want to consider this school, which, like all black academies, was started in the spirit of choice, not because of segregation. Herman Cain, Dr. Ben Carson, Steve Harvey and Omarosa Manigault developed the curriculum to feature concentrations in bootstrap pulling, law and order, and not protesting. Juniors have the opportunity for a summer study program in a hellish inner city if they don’t already live in one. The high-achieving students of the Frederick Douglass Historically Black Academy may someday have the opportunity to be a 98-year-old woman who is applauded at the Academy Awards. What have you got to lose?

This comprehensive and intellectually dangerous school will attract America’s wonkiest revolutionaries. Students will be expected to read 3,000 pages of obscure right-wing European philosophers, participate in a model dismantling of the U.N., and listen to endless rants by Sebastian Gorka about the evils of radical Islam. For a final project, they must travel to the Vatican and deliver a 45-minute speech outlining a radical and frightening worldview. Best to get with this program early, before it becomes mandatory.

The easily triggered will find a safe space in this revolutionary Brooklyn startup. Students learn the three languages of the #Resistance: Spanish, Lakota and Arabic. Mandarin Chinese will also be offered in case things really go south in the future. After memorizing the speeches of Angela Davis, your kids will understand who has the power (the people). Soon they will rise as the generation that will, once and for all, seize the system away from its capitalist overlords and their pig police. Tuition starts at $14,500 a year.

Vaccines and math are optional at this 40-acre compound run by six underemployed Santa Monica filmmakers, but there’s yoga and pranayama every day by the pond at 8 a.m. The Wellness School of Whole Children believes that students must be nurtured at all times, which is why at least one parent from each family must volunteer all day, every day. “Teachers” are an outmoded concept. Parents have so much more to offer. Families are also expected to provide all materials and participate in the construction of the facilities, which are scheduled to break ground soon.

Kellyanne Conway’s Girls Can Have It All School

Kellyanne teaches her girls the fine arts of grit, perjury and putting your face on every Sunday at 4 a.m. in order to endure questions from gross liberal journalists. Girls learn on Day One that if you’re willing to do or say anything for your boss, you can have a successful career and lots of babies. Etiquette lessons include how to dress like a Jacobin tart on Inauguration Day, and whether it’s not acceptable to put your bare feet on the couch in the Oval Office.

Abstinence Academy for the Sexually Pure

Students will get to look at pictures of 6,000-year-old dinosaur skeletons while answering questions like “How could that also be a bird?” God made Adam and Eve, not Adam and Steve, and Jesus Christ did not evolve from a monkey, say Ken Ham and Franklin Graham, who are in charge of everything. In history class, kids will develop an understanding of how God guided Thomas Jefferson’s hand when he wrote the Declaration of Independence. This school more or less existed before the Trump presidency, but now it’s free thanks to the government! Also included are a visit to the Creation Museum and Creation Museum: Florida Adventure.

When you think about it, classical liberalism is really the only logical way out of the morass in which we find ourselves. When you read the foundational texts of modern political economy in the original French, you’ll be able to elucidate the difference between zzzzz.

This college will be open to all Americans and will be 100 percent tuition free. It also includes a free lunch, featuring a scoop of Bernie’s Yearning Ben & Jerry’s ice cream. Attendees will study the Cuban health care system and will read "Rules for Radicals" in the original Russian. In an ironic twist, the top 1 percent of graduates will get more jobs than the other 99 percent combined.

Learn to speak and Hebrew and study the lessons of Talmud and Torah at this treasured community institution presided over by a guitar-playing rabbi and warm, nurturing teachers. Dress like Ivanka and Jared for Purim. Vouchers cover hot kosher meals and daily bomb-threat evacuation expenses.

Spend most of the day kind of bored but occasionally have a couple of teachers who inspire you. Play in the band or run track or be on the yearbook committee or something. Learn enough to not make you a moron and do well enough to get into a decent college. Have a normal childhood. Limited spaces available.