President Pence's problems: Indiana Democrats say VP was "the worst governor we ever had" 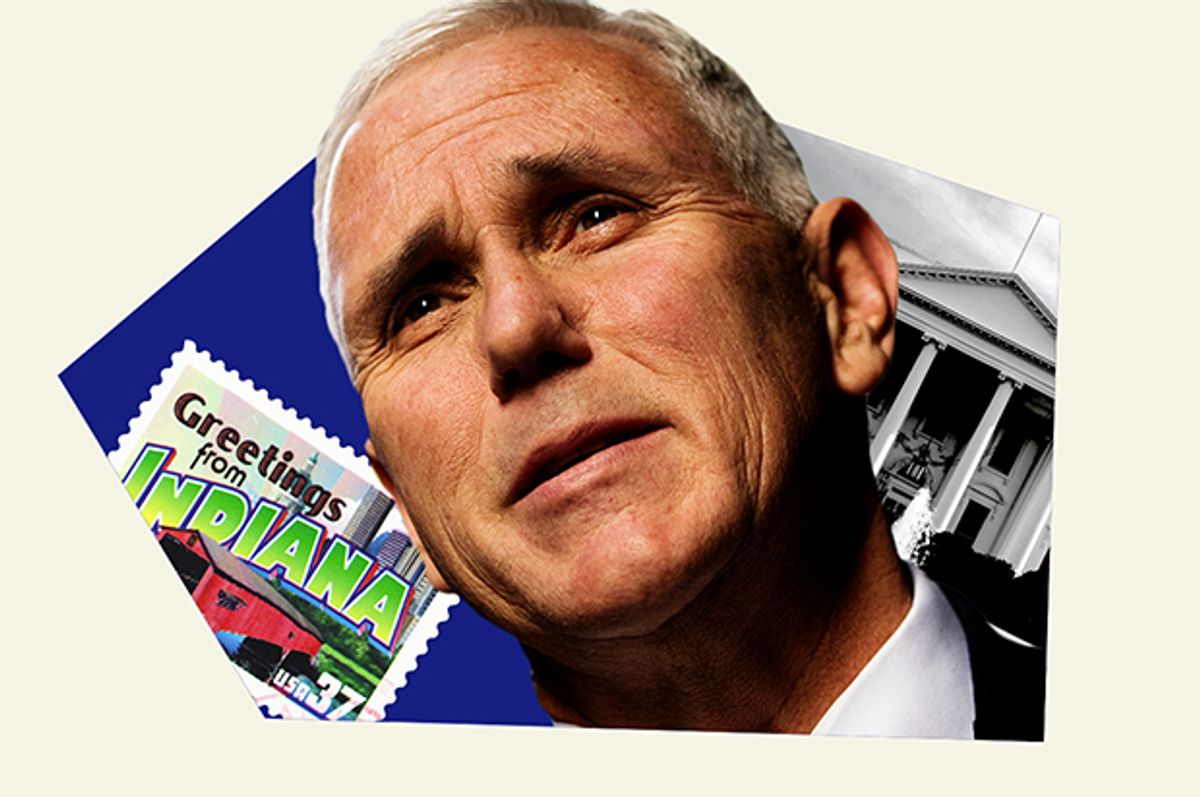 It's impossible to predict whether President Donald Trump will be impeached, but as of last month 40 percent of voters wanted an impeachment to happen. This statistic raises an important question: Were Trump to leave office, would Vice President Mike Pence be better or worse than The Donald?

According to Indiana state legislators who worked with Pence, it would probably be worse.

"I think that in my lifetime, he's probably the worst governor we ever had," Indiana State Senator Karen Tallian, a Democrat, told Salon. "I think Mike Pence made a mess of everything. He would throw out these sort of bombshell ideas and then leave them for his staff people to implement. And his staff people normally made a mess."

Tallian added, "He did not have, in my opinion, really good staff. Now later, toward the end of his term, he brought on a few good people, but during the beginning of his term he was left with Mitch Daniels' second string."

Although widely forgotten now, Pence's first appearance on the national political stage occurred when his 1990 congressional campaign was derailed by the revelation that he had used campaign funds to pay for personal expenses including his mortgage, credit card bills and even golf tournament fees. While this was legal at the time, the uproar over the obvious ethical lapses eventually prompted the current prohibition on such practices. Pence himself has later described his actions as "an exercise in naivete."

Pence's office did not respond to a request for comment.

Pence's record as governor of Indiana is indeed spectacularly unimpressive. He achieved modest tax cuts, often moved on important issues like infrastructure repair and halting an HIV epidemic only when the political pressure became too great, and was best known for a notorious law that allowed businesses to discriminate against LGBT individuals — before the ensuing controversy forced him to revise the bill.

On Friday, it was revealed that he used a private email account for official business, while criticizing Hillary Clinton's use of a private email server on the 2016 campaign trail.

Although Pence liked to brag about being "a Christian, a conservative, and a Republican — in that order," he wasn't very effective at doing any of those things for the people of Indiana, lawmakers said, with his greatest achievements being reactions to necessity rather than major initiatives.

"Mitch Daniels, we didn't agree on a lot of things, but Mitch Daniels was a man with a plan," Tallian said. "And he knew how to get something done. And I would say the same thing going back to Bob Orr [Indiana's Republican governor during the 1980s]."

"When he first got into office, he asked legislators down to his office — one, two, three at a time — to kind of meet and greet, what are you working on, what do you do," Tallian said. "At that time, I happened to tell him that, among other things that I was working on, I was trying to do a medical marijuana bill. And he just looked at me and, with probably the most sincere thing I ever heard come out of his mouth, he looked at me and he said 'Well that'll never happen!'"

Legislators point out that Pence's conservatism is analogous to that of Trump.

"While Mike Pence is a danger to progressive and even moderate visions for the nation, the numbing familiarity of his boilerplate would inspire more groans than screams," said Indiana Democrat Scott Pelath, the state's House minority leader, who has served in the state legislature since the late 1990s. "Every domestic speech will contain the words 'family, faith, and freedom' surrounded by some off-the-shelf Republican notions. Sanguine aides will carefully edit his remarks and tweets until they are sufficiently empty."

Pelath added: "Mike Pence is a generically hard-right leader with theocratic lapel pin. We all knew Mike Pence before he was reincarnated from several generations of past Republicans."

Pelath also painted a nuanced picture of Pence's character, one that does by implication draw some favorable contrasts against President Trump.

"Mike Pence has the prerequisite understanding of political customs, American history, and the three branches of government," Pelath said. "My sleep would resume its normal patterns until the nation made a change and we could move on."

Still, Pelath described Pence the man as "a personally decent and thoughtful guy.  You would be willing to pick up his mail while he was on vacation."