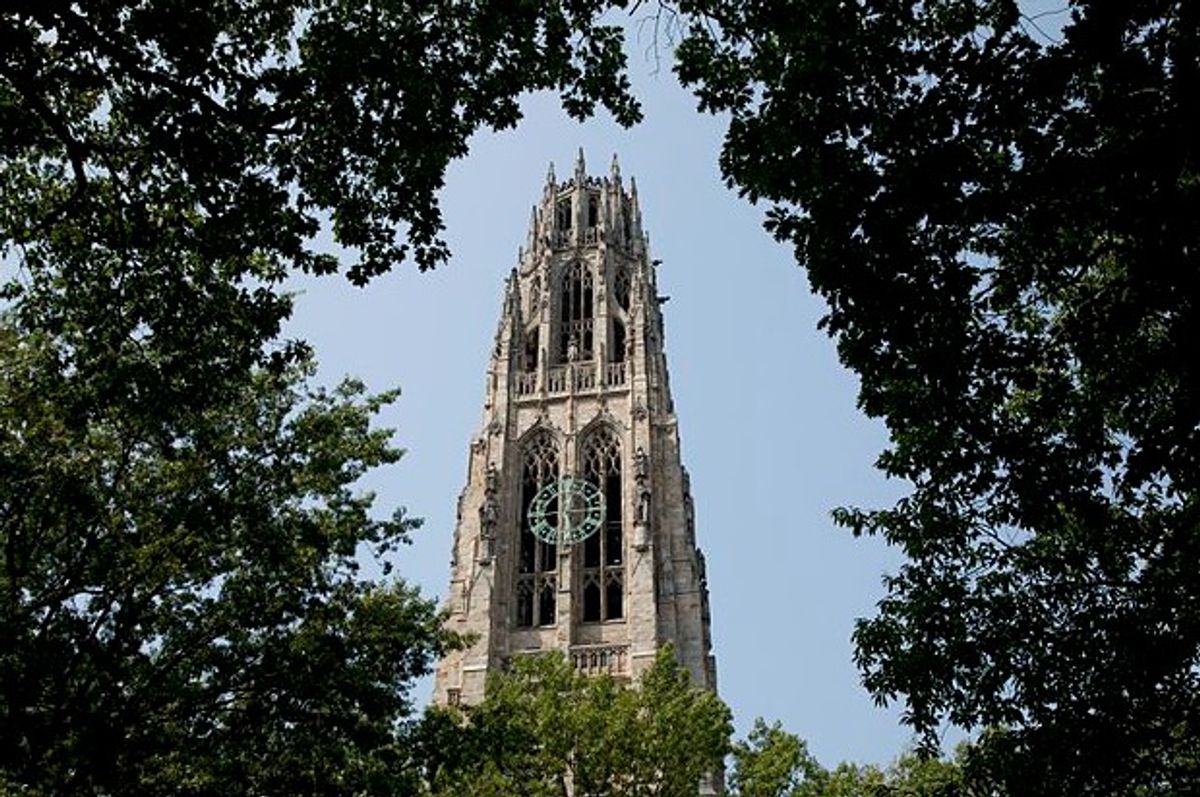 When Yale announced a $150 million donation from alumnus and plutocrat Stephen Schwarzman last year to convert its historic Commons and Memorial Hall into the “state of the art” Stephen A. Schwarzman Student Center, an undergraduate, Nathan Kohrman, penned a deft summary of the man’s arrogant blundering through the American public sphere that the college has long cherished and nourished:

“What about Schwarzman —other than his estimated $10 billion fortune — does Yale find appealing? Surely not his belief, as of October 2015, that Donald Trump’s ‘political incorrectness’ makes him ‘good for democracy.’ Surely not his 2011 suggestion to raise taxes on the working poor because ‘skin in the game’ might make them work harder. Surely not his view that a 2010 bipartisan effort to close a private equity tax loophole — from which Schwarzman personally profits —  was ‘like when Hitler invaded Poland in 1939.’ Surely it is not his prominence at the Koch brothers’ donor summits, where he’s donated undisclosed millions to political organizations that have cannibalized the GOP establishment and paralyzed the Obama administration.”

Kohrman’s remonstrance received only passing attention, but it merits urgent re-reading and distribution now that Schwarzman is chairing President Trump’s business advisory council. Fellow billionaire Michael Moritz’s characterization of him last week in The New York Times as one of Trump’s “Goodfellas” is only one of the reasons.

Schwarzman’s personal piggishness aside, the very premises, protocols, and practices through which he’s accumulated his $10 billion personal fortune and more than $360 billion for his private-equity Blackstone Group do far more damage to our economy, society and republic than he and other private-equity adventurers and hedge-fund heroes can ever repair through self-cleansing, self-celebrating philanthropy.

Blackstone has profited from damaging society and the economy by moving in on the home-rental market and shifting its private debt obligations to the taxpayers. As one of the largest owners of rental homes in the country, with nearly double the average eviction rate, Blackstone has been transforming the homes into CDO's (debt obligations -- mortgages, bonds, and other loans pooled as speculative investments for Schwarzman). This is virtually the tactic that engineered the Great Recession. Thanks to Schwarzman, the federal Fannie Mae is underwriting the Blackstone project.

In "Quarrels With Providence" , his immortal essay about Yale's always-precarious balancing of private wealth-making and American nation-building, Lewis Lapham cites conversations with alumni whose exposure to liberal education in college had left them expecting a bit "more of themselves than a fortune in vulcanized rubber or a row of condominiums on the Mississippi Gulf Coast. The object of a Yale education they remembered as a joining of the proofs of success to those of conscience...."

For more than a century, countless Yale graduates have avoided achieving that noble object. But even a row of condominiums on the Gulf Coast comes closer to joining worldly success to conscience than a mountain of predatory mortgages dooming the properties' tenants to eviction in the Age of Trump that Schwarzman heralds so vividly.

That Schwarzman is a living donor argues all the more strongly for Yale’s rescinding the naming of the center. Another living alumnus, the investment banker Charles Johnson, donated $250 million to build two new Yale residential colleges that are nearing completion, but he’s been too modest to let either one be named for him. At least Johnson knows better than to celebrate himself on an edifice; he and former Reagan Treasury Secretary Nicholas Brady underwrite Yale’s eponymous “Brady-Johnson Program in Grand Strategy,” beloved of Vulcan conservatives —and of David Brooks, who teaches there—for inducting undergraduates into hegemonic American delusions leavened with ancient apercus.

Both men’s kind of capitalism is likely to destroy capitalism itself by deepening inequality and distorting demand in a vicious, degrading civic spiral, but Schwarzman is too small, too void of public spirit, to finesse that reality through his philanthropy, as he demonstrated by insisting that a $100 million donation to the New York Public Library’s majestic, 1902 Beaux Arts main branch, a registered landmark, be memorialized by engraving his name on the building not in one but five places. (He had to settle for two, but the edifice is now The Stephen A. Schwarzman Building.)

If Yale took Schwarzman’s name off the student center and he demanded his money back, that would only make him look even worse than his collaboration with Trump already does. The university would more-than survive the loss of his $150 million. Yale is wealthy and venerable enough, and its commitments (pretensions?) to serious public stewardship should run deep enough to restrain it from baring what Kohrman called a “weakness — of which we’re all aware and a shade ashamed — for glitz, prestige and money.”

Like Trump, Schwarzman incarnates that weakness, but Yale has struggled for more than 300 years to exemplify republican citizen leadership in its graduates’ lives and works by balancing capitalist energy and inventiveness with religious or scientific truth-seeking and the arts and disciplines of republican power-wielding. When I was an undergraduate there in the late 1960s, so were John Kerry, Howard Dean, Garry Trudeau, and hundreds of keepers of the civic flame less well-known. (Then again, Schwarzman and George W. Bush were there, as well.)

The Yale Faculty Senate should affirm its mission to advance liberal education and a civic-republican ethos by admonishing the university against teaching students this awful and embarrassing lesson. The students’ Yale Daily News should flesh out what Kohrman’s column noted, with attention to the edifice-naming mania that almost-comically grips both Schwarzman and Trump). The truth should be disseminated regularly on and off campus as part of a boycott of the center if its name isn’t changed. Surely Schwarzman’s public utterances and infelicities will keep the boycott going.

But better yet, Yale should correct its blunder now, not 75 years from now, as it did this year in deciding to stop memorializing its alumnus John C. Calhoun, American slavery’s most ardent and powerful defender, in a Yale residential college that had been named for him in the 1930s.

If history surprises us by viewing Schwarzman more favorably than anyone does now, let Yale name something for him at that time. Refraining now and enduring his wrath would be a lot less painful and disgraceful than making a retraction ten years from now. Yale should keep its civic-republican balance by giving this bounder whatever honor he deserves only after he’s earned it, not bought it.