Whitewater, Benghazi — now Obamagate? Echoes of fake GOP scandals from the past

Inventing scandals about Democrats is a venerable GOP tradition. Now it's Trump's ploy to save his presidency 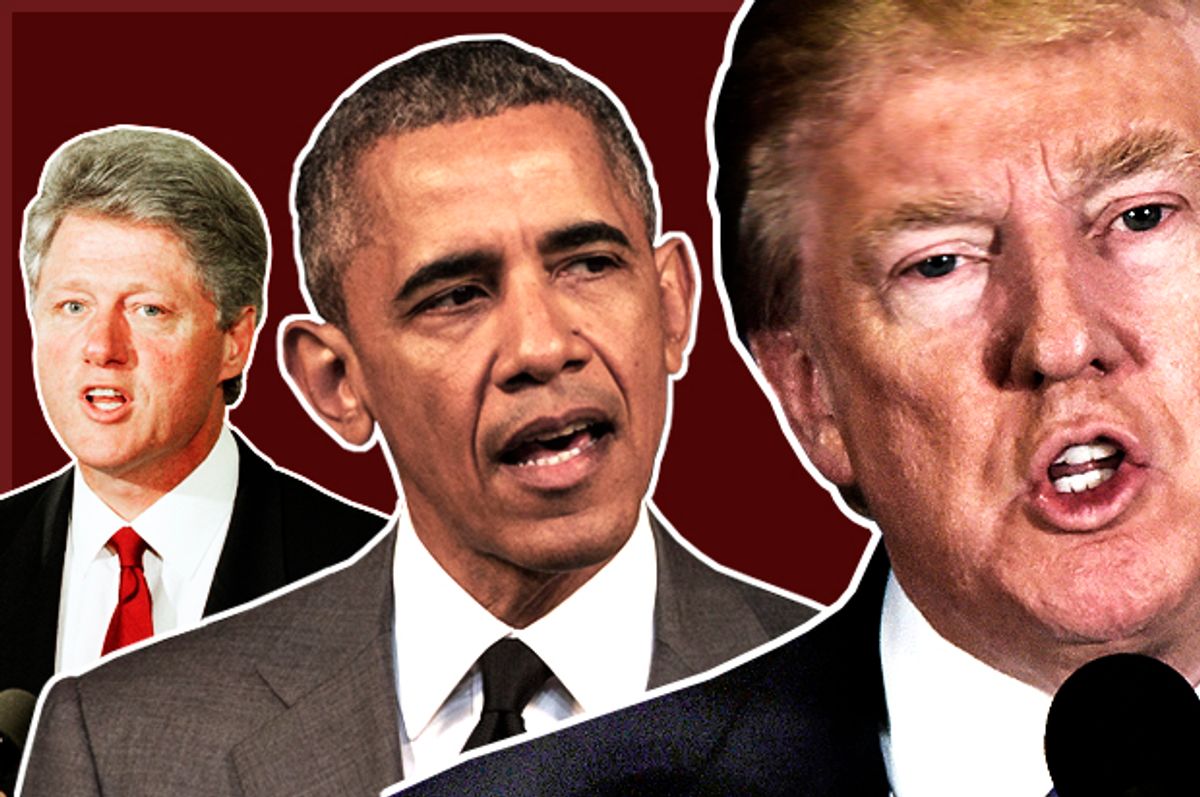 You have to feel a little bit sorry for Sean Spicer. Being the spokesman for an unbalanced man with a bad temper and an early morning Twitter habit is a tough job. During Tuesday's press briefing, MSNBC's Hallie Jackson asked Spicer a perfectly logical question: Why would the president want Congress to investigate a crime when he already has the evidence?

After all, as Kellyanne Conway said on Monday morning, "He's the president of the United States. He has information and intelligence that the rest of us do not." So why wouldn't he give it to members of Congress so they don't have to spend time and resources trying to dig it up? Spicer merely mumbled something incoherent about it being a separation of powers issue, which doesn't make any sense.

But what could he say? It has been widely reported that Trump's "information" came from talk-show host Mark Levin's rant on Breitbart, not from any classified briefings. The president needed to relieve himself of his pent-up anger on Saturday morning, so he blasted former President Barack Obama on Twitter and it's taken on a life of its own.

Trump is no master strategist but he does have a strong feral survival instinct and a bottomless reservoir of personal good fortune. That combination often leads him to inadvertently luck into a strategy that will help him out of a mess he's made for himself. His temper tantrum last weekend may very well end up being that way. After all, Republicans may have no idea how to write coherent legislation or deal with angry constituents, but they do know how to do one thing very, very well: gin up a phony scandal. The president just handed them the excuse to pursue a bogus investigation of a Democratic president, and that has to be a great relief to a caucus that is clearly in over its head trying to actually govern.

You can already see the scandal machine being warmed up. The old Clinton nemesis Judicial Watch got on the case immediately with a lawsuit against the CIA, Department of Justice and Treasury Department for their failures to provide information about the calls between Michael Flynn, former national security adviser, and the Russian ambassador. Their press release included this comment:

President Trump is on to something. The Obama-connected wiretapping and illegal leaks of classified material concerning President Trump and General Flynn are a scandal.

James Comey, the FBI director, has let it be known that no such "Obama-connected" wiretapping occurred. But facts have never stopped Judicial Watch from using the Freedom of Information Act and the courts as a partisan bludgeon. Back in the 1990s the group was relentless in its pursuit of Bill and Hillary Clinton, playing a substantial role in the harassment campaign that dogged the administration for eight years.

Regarding Trump's overwhelming conflicts of interest and potential for corruption, however, Judicial Watch's Tom Fitton had this to say:

As we said in our recent New York Times op-ed, it would be unfair to insist that Mr. Trump destroy his business to become president. This ethics plan follows many of Judicial Watch’s recommendations and reasonably addresses pressing concerns about separating Mr. Trump’s private business from the public’s business.

But the serious players in this game are members of Congress. We've just been through the inanity of eight Benghazi committee investigations and months and months of garment rending over Hillary Clinton's email server, so everyone is familiar with their propensity to make a federal case out of absolutely nothing. But they have been even crazier in the past. "Filegate," "Travelgate," "Troopergate" and, of course, Whitewater and the Monica Lewinsky affair were just some of the scandals Congress investigated in the 1990s.

Congressional Republicans even spent years torturing the family of former deputy White House counsel Vince Foster after his tragic suicide. Rep. Dan Burton delivered a notorious speech on the House floor in August 1994, saying he had conducted forensic tests in his backyard proving that Foster couldn't have fired the gun himself:

We, at my house, with a homicide detective, tried to re-create a head, and fired a .384-inch barrel into that, to see if the sound could be heard from a hundred yards away.

The head he "re-created" was widely reported to have been a watermelon, although some have said it was a pumpkin or a cantaloupe.

And here you thought the Republicans had only gone completely crazy in the last couple of years.

So far the current Congress has been treading rather lightly on the Trump allegations of Obama's criminal wiretapping. Most likely the FBI and the intelligence community's obvious pushback against the notion that they are involved has made Republicans cautious. But that hasn't stopped some from taking it to the next level anyway. Commentator Hugh Hewitt threw out a thinly veiled threat in his Washington Post op-ed on Tuesday, suggesting that calls for a special prosecutor to investigate Russian interference in the presidential election must also include more harassment of Hillary Clinton over her email server. (He offers no reason why, but the history I just described shows that there's no need to show any connection between various witch conservative hunts.) No doubt the Trump voters would be thrilled to bring back "Lock her up!"

Congressman Steve King of Iowa may have found the hook that will allow Congress to allay the intelligence community and the FBI's concerns over their reputation being sullied by intimations that they conspired with Obama to spy on Trump in his golden tower. King has been quoted as telling the Sioux City Journal that such denials don't "necessarily prove that there wasn't a rogue intel operation going on that wasn't encumbered by, or just decided not to be encumbered by, the legalities."

There's no evidence of that, of course. But it's a pretty good bet that this is what Trump wants people to think happened, and one can certainly see how such a suspicion could be parlayed into a full-blown investigation. If Congress and the Justice Department don't do what the White House clearly wants them to, which is to drop the Russian investigation altogether, it's likely we'll be hearing about Obama's alleged illegal wiretap operation for a while.

If that doesn't work, Trump will instinctively find another way to project his problems onto his political enemies. He's tried turning the press into the "enemy of the people," and that really hasn't worked. Now he's gone after Obama. Let's just hope he doesn't wake up one morning in a snit and decide to start a real war to make himself feel better.