SCOTUS makes it rain: Most of the big money behind the 2016 election directly resulted from Supreme Court decisions 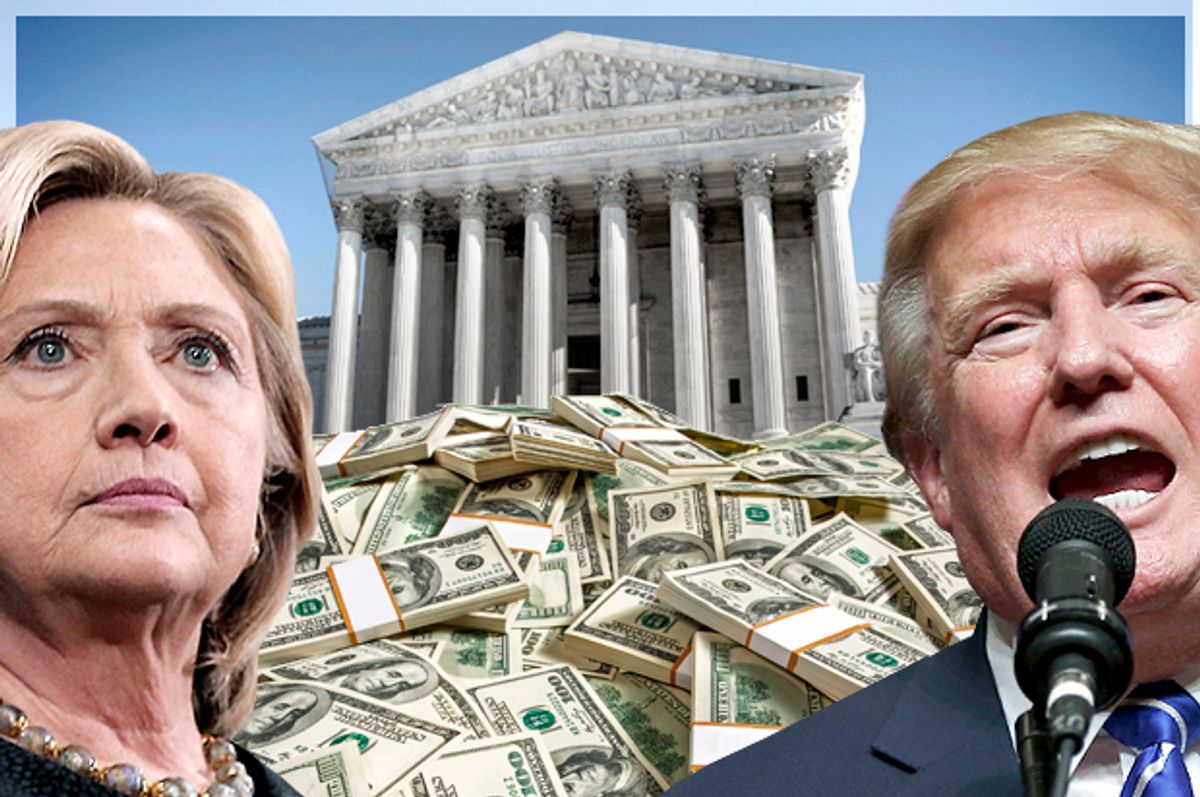 Congressional hearings for President Donald Trump’s pick for the Supreme Court are less than a week away, and voters want to know what confirming Judge Neil Gorsuch could mean for their voices in America's democracy. More than 90 percent of voters (including 91 percent of Trump voters) say it's important for the president to nominate a Supreme Court justice who is open to limiting big money in politics. Seventy percent of Trump voters believe that Congress should reject nominees who would help the wealthy and privileged wield too much power in elections.

This makes perfect sense, since our new research shows that Supreme Court decisions are responsible for a significant share of the money spent in the United States political system. Indeed, our new report, "Court Cash," shows that 77 percent of the expenditures in competitive 2016 races could be directly attributed to Supreme Court rulings striking down basic protections against big money dominating U.S. politics.

For four decades the high court’s flawed approach to money in politics has shaped a democracy in which the strength of Americans' voices depends upon the size of their wallets. We focused our research on four Supreme Court cases, including the widely known Citizens United v. Federal Election Commission decision and the more obscure but equally important 1976 Buckley v. Valeo decision. We also studied the Colorado Republican Federal Campaign Committee v. Federal Election Commission ruling, which built upon the Buckley decision; and we analyzed 2014’s McCutcheon v. FEC separately, since it deals with contributions to candidates, rather than spending by candidates, corporations and outside groups.

In the Buckley case, the Supreme Court addressed Congress’ post-Watergate reforms, dramatically changing the legal landscape surrounding money in politics. The court upheld contribution limits (money given to candidates), disclosure requirements and a system providing public funding for presidential candidates, but struck down several key protections against big money: limits on self-funding, spending by candidates and independent expenditures on behalf of candidates.

Twenty years later the court built upon that decision in the Colorado Republican ruling, which eliminated restrictions on party expenditures for or against candidates. Most infamous, in 2010’s Citizens United, the court let corporations spend directly on elections. Another result of that case (through a D.C. circuit court opinion that closely followed its logic) was the rise of super PACs — political action committees that don't make direct contributions to candidates or parties but can accept unlimited contributions from corporations, unions and wealthy individuals and spend unrestricted money to flood the airwaves with ads favoring or opposing candidates. More recently, in McCutcheon, the court struck down the aggregate limits on how much wealthy individuals could give to all federal candidates, parties and PACs combined.

The aggregate impact of these decisions has quite literally transformed the American political system. We calculate that in the 22 congressional races (17 House and 5 Senate contests) won by 5 percentage points or less last year, money enabled by these Supreme Court decisions accounted for 77 percent of spending. Nearly half the money spent on the 2016 presidential election was warranted by these decisions. Across all federal races, the Supreme Court enabled 45 percent of all spending, allowing for more than $3 billion to be injected into American elections. Though the McCutcheon case was not included in these numbers because it affected contributions to candidates rather than spending by or on behalf of candidates, we calculated that just 1,724 wealthy donors contributed $274 million in “McCutcheon money” in 2016 — funds that extended beyond what would have been permitted by the aggregate limit. These elite donors contributed on average $287,000, or more than five times the median annual household income in the United States.

Previous Demos research has shown that the big donors who take advantage of these Supreme Court rulings are disproportionately wealthy, white, male and conservative. Only one-third of donors giving $10,000 or more to congressional campaigns were women (who constitute more than half of the adult population) and nearly half were millionaires (who make up 3 percent of the adult population). Only 6 percent of donors contributing more than $10,000 to congressional races in 2012 and 2014 were people of color (who represent a quarter of the adult population). Furthermore, large donors hold different policy preferences than the general public. They are more supportive of domestic spending cuts, more likely to oppose taking action to mitigate climate change and less supportive of the Affordable Care Act. The Supreme Court’s decisions have empowered wealthy, white conservative men, distorting democracy.

For decades, the Supreme Court has dramatically shaped American democracy, often out of the public eye. These decisions have had far-reaching consequences. At next week’s hearings, it is critical that Senate Judiciary Committee members press Gorsuch for his views on whether the Constitution empowers the people and U.S. representatives to pass commonsense protections against big money. Voters won’t like what they learn, if Gorsuch answers such questions at all.

In the two directly relevant cases faced by Judge Gorsuch, he voted to expand First Amendment rights for corporations and went out of his way to signal openness to applying the harshest possible standard of review to campaign contribution limits. Taken together, these opinions suggest that Judge Gorsuch would be receptive to attacks on the few remaining protections against big money — specifically the current bans on “soft money”contributions to political parties and corporate contributions directly to candidates.

For this reason, among others, senators should do everything in their power to defeat Judge Neil Gorsuch’s confirmation to the U.S. Supreme Court — including applying a 60-vote threshold for moving to a final vote.

Adam Lioz is counsel and senior adviser, policy and outreach at Demos.

Juhem Navarro-Rivera is a senior policy analyst at Demos.