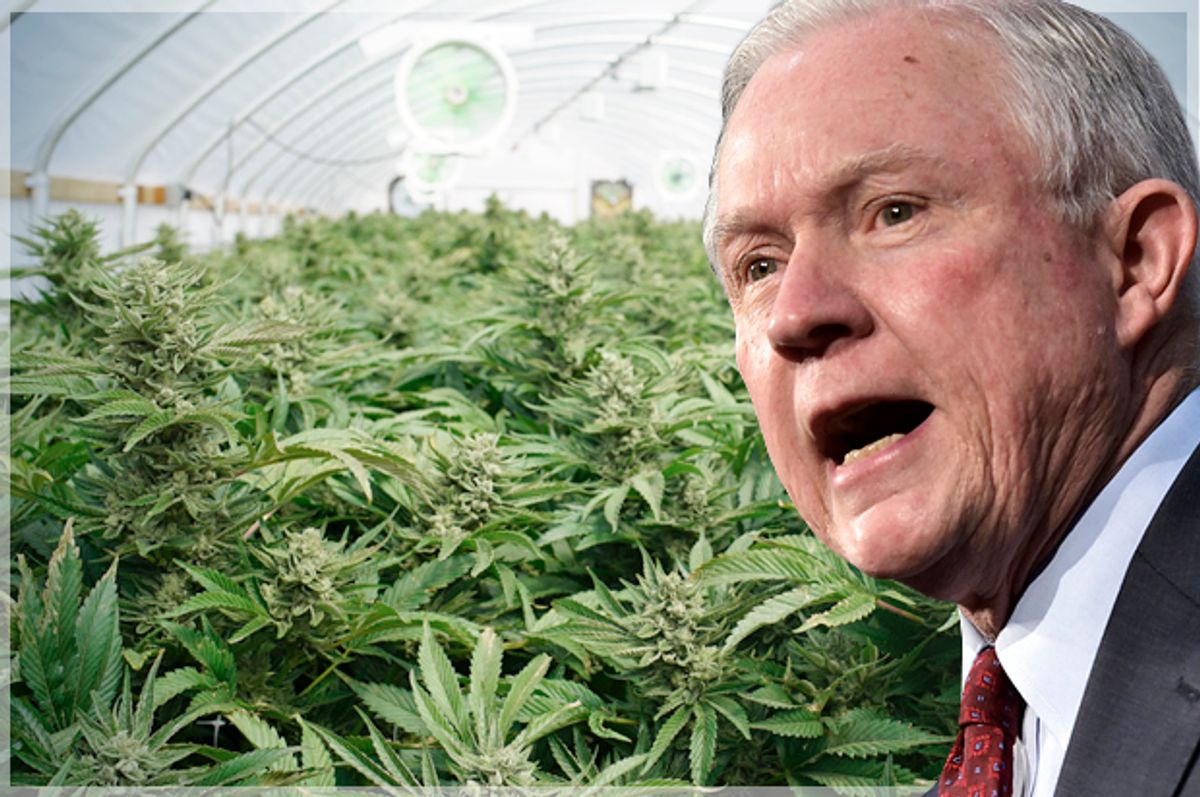 Attorney General Jeff Sessions announced Wednesday that he plans to spend his time in office cracking down on violent crime in the United States by taking a strict law-and-order approach to marijuana, which he argued is a gateway drug that leads to criminality.

President Donald Trump's embattled choice to be the nation's top cop called on law enforcement officials to revive the tough-on-crime policies that wrecked havoc on several communities throughout the U.S. in the 1980s and 1990s. During a speech in Richmond, Virginia on Wednesday which focused on ways to combat violent crime, Sessions said one of the steps to improving public safety is to ensure that citizens don't start taking drugs in the first place.

“President Trump gave us a clear directive. It’s the policy of this administration to reduce crime in America," he told gathered law enforcement officials.

In a shift from the decades-long states' rights dogma championed by the former Alabama senator, Sessions said there is a need for federal involvement in ordinary crime-fighting. He also called for harsher sentences for criminals.

“The crime rate in our country remains at historic lows,” Sessions acknowledged in his remarks. “But we’re beginning to see an increase again,” he said, drawing a direct line from the nation's opioid addiction crisis to violent crime -- first beginning with marijuana.

Last month, Sessions claimed that “experts are telling me there’s more violence around marijuana than one would think and there’s big money involved.”

Sessions conceded that his antiquated views on marijuana might be "unfashionable" on Wednesday, but insisted that "our nation needs to say clearly once again that using drugs will destroy your life." Pointing to former first lady Nancy Reagan's "Just Say No" anti-drug campaign, Sessions called marijuana a "life-wrecking dependency" that is "only slightly less awful" than heroin.

"We need to say as Nancy Reagan said, 'Just Say No.' Don't do it! There is no excuse for this," Sessions said. "It is not recreational."

Sessions said that he participated in such prevention campaigns as a federal prosecutor in the 1980s. "We can do this again," he said. "We can reduce the use of drugs, save lives and turn back the surge in crime that inevitably follows in the wake of increased drug abuse."

But Reagan's most ubiquitous prevention program, D.A.R.E, was ineffectual at best. Researchers found that teenagers who were enrolled in the drug prevention program were just as likely to use drugs as those who did not receive this training, according to Scientific American. After Congress passed the the Drug-Free Schools and Communities Act in 1986, mandating zero tolerance for any drugs or alcohol found on public school grounds, education experts said the so-called school-to-prison pipeline began to explode in public schools across the nation. According to 2014 Census data, more young black high school dropouts are in prison than have jobs.

The attorney general ignored such research, however. "I reject the idea that America will be a better place if marijuana is sold in every corner store," refuting an argument that few, if any, serious policymakers have made. “I am determined that this country will not go backwards," he vowed:

Sessions' conflation of the nation's opioid addiction and overdose crisis, which now claims 140 lives a day, with medical or even recreational marijuana use is even more egregious in light of the fact that it came only seconds after the attorney general told the gathered law enforcement that "every three weeks, we are losing as many American lives to drug overdoses as we lost in the 9/11 attacks."

Contrary to Sessions' fearmongering over cannabis, however, a new report published in the journal Drug and Alcohol Dependence last month found opioid hospitalizations decreased in states that allowed medical marijuana. Answering reporters' follow-up questions, Sessions added that, "I think medical marijuana has been hyped, maybe too much" and declared himself "dubious" about the health benefits of marijuana.

Medical marijuana is legal in 28 states plus the District of Columbia and it is legal to carry recreational marijuana in eight states. Sessions' own home state of Alabama recently allowed the use of some marijuana-derived products for the treatment of individuals with debilitating conditions.

While Sessions did not specify if the Department of Justice has any plans to oversee a crackdown on recreational marijuana shops and medical marijuana dispensaries in states where it is legal, he did warn that federal law is "not eviscerated because the state ceases to enforce it in that state."

The Drug Policy Alliance, a group working to reform harsh drug laws, said that Sessions' comments reflect a radical departure from the DOJ's focus on counterterrorism and the prevention of cyberattacks from foreign criminals under former President Barack Obama.

Sessions' remarks are "a sort of starting gun for a new war on drugs," Michael Collins told The Washington Post on Wednesday. "It's very disappointing that this DOJ and this Attorney General is so anti-science and anti-evidence and anti-facts."