In America, the Irish are now so white that they're all over the White House, conveniently ignoring history 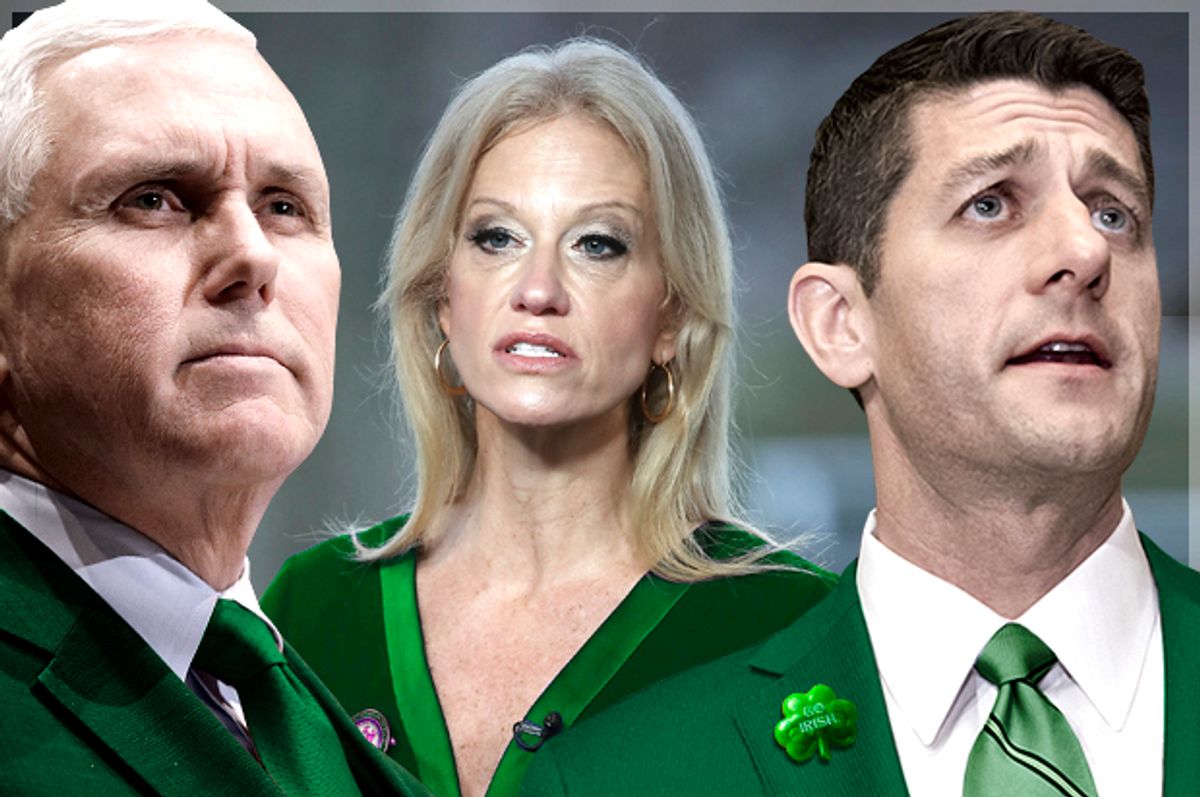 Friday is St. Patrick’s Day, an annual celebration of pseudo-Irishness that like many other such things — Cinco de Mayo, pizza and most of what Americans consider “Chinese food” — was a product of the immigrant experience, transformed beyond recognition and exported back to the homeland. My Dublin-raised father, with the unique snobbery of the recent arrival, always sneered at the green beer and “Danny Boy” sentimentality of Irish-American St. Paddy’s celebrations as “amateur hour.” It wasn’t for serious Irish drinkers such as himself, who had 364 other nights to spend in the bar discussing “horses, women and philosophy,” as another family member once put it.

This year’s big party arrives amid considerable angst among Irish-identified people on both sides of the Atlantic. Enda Kenny, who heads a tenuous centrist coalition government as Taoiseach, or prime minister, of the Republic of Ireland, is making his required pilgrimage to the United States this week, which among other things involves the bizarre ritual of bringing a bowl of shamrocks to the White House. Social media back home, meanwhile, has been merciless in describing what ought to be in that bowl or what he should do with it. Kenny is widely perceived in Ireland as a spineless prevaricator with no discernible principles, and showing up as scheduled to kiss the Trumpian ring — after previously presenting himself as a Trump critic and skeptic — isn’t helping.

Most people in Ireland see President Donald Trump the way the rest of the world sees him — as an unstable and unhinged con artist who represents America’s most craven tendencies and is grossly unqualified for high office. Aodhán Ó Ríordáin, an Irish senator from the opposition Labour Party, went viral and worldwide two days after the November election with his vivid denunciation of Trump as a fascist, long before that term was applied in mainstream discourse.

But for the Irish, this view of Trump comes with several extra twists of the knife. If Irish immigration to the United States peaked generations ago, it continues to occur, and the two countries are inextricably connected by blood, culture and history. During his White House visit on Thursday, Kenny reportedly asked Trump to legalize the status of the roughly 50,000 Irish citizens who currently live illegally in the United States. That’s a drop in the bucket of the overall undocumented population, to be sure, and it’s a relatively low number by historic Irish standards. Even so, it represents more than 1 percent of the current Irish population. Except among the affluent classes, nearly everyone in Ireland has a friend or family member who has worked illegally in the U.S. or is doing so now.

Many families in Kenny’s homeland would benefit from such a move, but the blatant and shameless racism of requesting special privileges for an immigrant group that happens to have fair skin, speak English (with such a charming accent!) and come from Christian Europe (more or less) has not gone unnoticed. Maeve Higgins, a comedian and writer from County Cork who now lives in New York and hosts a podcast popular among Irish émigrés, recently described to a New York Times reporter the “incredibly racist conversation” that begins, “Maybe we should let these ones stay, they’re good, we can sort them out”:

When I see these Irish names in the White House and I see what they’re doing to refugees, my mind goes straight to the coffin ships. . . . That was us 100 years ago on the boats, drowning. What’s the difference, that these people are brown and black?

By “coffin ships,” Higgins means the overcrowded and decrepit vessels used to carry Irish immigrants to America during the Great Hunger of the 1840s and '50s, on which many people died. They were inarguably better than slave ships -- at least the passengers were not literally someone else’s property -- but conditions were similar. But let’s get back to those Irish names in the White House, because that’s a genuine source of St. Paddy’s anguish for many of us. It’s one thing that Enda Kenny is such a soulless, crawling shoneen that he’s willing to ask President Trump to bestow special favors on Irish undocumented immigrants. It’s another that he knows, beyond a shadow of a doubt, that he’s talking to a friendly audience and that the Trump administration will definitely do something for the lads and lassies of the Emerald Isle if it possibly can.

Trump has no discernible Irish ancestry — unlike, say, Barack Obama, who is descended on his mother’s side from Ulster Protestants. But he has surrounded himself with the most Celtic-tinged presidential inner circle since John F. Kennedy. Vice President Mike Pence has at least two Irish-born grandparents, making him (like me) eligible for dual citizenship — although he’d have to give that up in order to serve as a federal employee. House Speaker Paul Ryan, who depending on what day it is may or may not count as a Trump ally, has conspicuously celebrated his Irish roots, although those go back to the 19th century.

The irony of the most anti-immigrant administration in American history being staffed and surrounded by people whose presence on this continent goes back to the first great wave of American immigration — and whose ancestors faced vicious nativist hostility and widespread discrimination for decades, if not centuries — is difficult to encompass or ignore. Indeed, although irony is definitely involved, we need a bigger word. The Irishness of the Trump regime -- and of the entire racist and xenophobic current in American right-wing politics exemplified by Sean Hannity and Bill O’Reilly -- is closer to classic tragedy, with elements of dark comedy.

I have discussed this previously, in an intemperate St. Patrick’s Day screed three years ago that got me crossed off some Christmas lists in my extended family, but was received with considerable hilarity in Ireland itself. It’s not an unfamiliar pattern: Historical lessons are turned upside down, a group that has endured oppression yearns for approval and acceptance from its oppressors, and one form of identity that came to seem problematic is swapped for another that comes with material and cultural advantages.

In this case, the Irish emigrants, forced from their homeland by poverty, hunger and colonial brutality, gradually moved away from any sense of themselves as casualties of imperialism and an especially ruthless variety of British capitalism and toward the blissful embrace of “whiteness,” a category to which they emphatically did not belong when they first got here. Indeed, it was a category that did not exist, in its contemporary sense, until recent historical times: Until at least the 1920s, if you asked most Americans whether Jews, Italians or Irish were “white,” it would have seemed like an almost meaningless question. I mean, the answer was clearly yes, but the idea that that made them culturally or demographically similar to one another, or to Anglo-Saxon Protestants, in any fundamental way would have been ludicrous.

As Noel Ignatiev’s controversial book “How the Irish Became White” explores in agonizing detail, the process by which members of a despised and impoverished immigrant group — once demonized almost as thoroughly as Muslims are today — transformed themselves into avatars of whiteness began a long time ago and took centuries to complete. Personally, I would rather focus on the resistance to that tendency, which goes just as far back in history and continues to this day. As Irish Times columnist Fintan O'Toole (who has also lived in the U.S.) wrote last week, this is "a moment of truth about what it means to be Irish in the world."

Ó Ríordáin, the Irish senator, recently pointed out on Twitter that 19th-century Irish nationalist Daniel O’Connell was outraged to discover that there were Irish-American slaveholders in the antebellum South. He demanded of them: “How can the generous, the charitable, the humane and the noble emotions of the Irish heart have become extinct within you?”

We might want to phrase that question in less fulsome language today, but it remains worth asking. What has befallen the sons and daughters of that rain-sodden island of poets and dreamers such that we wound up with shrunken, dark-hearted leprechauns like Mike Pence, Sean Spicer and Paul Ryan? Some of us have not forgotten our history and still understand that the true lessons of that history confer upon us a responsibility to welcome the outcast, the refugee, the homeless wanderer. As for Enda Kenny and his toadying, forelock-tugging visit to his Washington overlord, he and Donald Trump can eat that bowl of shamrocks. With something else on top.